I found this species on the coast of Labrador in very small numbers, all paired, in the month of July; but our endeavours to discover their nests were unavailing, and their shyness, which surpassed even that of the Great Black-backed Gull, prevented us from seeing much of their habits. I have never met with one on any part of our Atlantic coast, and I am much disposed to believe that those which may retire from the Arctic regions, where they are numerous, follow the north-west shores of America, as is indeed the case with many of the hyperborean birds, they giving an unaccountable preference to that side of the continent. It is true that I have often been told at Boston and New York that the Glaucous Gull had not unfrequently been procured there; but in no instance could I place any reliance upon the report, for when the supposed Glaucous Gull was shown to me, it proved to be merely a large specimen of the Herring Gull, Larus argentatus. Dr. RICHARDSON, who had good opportunities of observing this bird, speaks of it as follows:--

"This large and powerful Gull inhabits Greenland, the Polar Seas, Baffin's Bay, and the adjoining straits and coasts, in considerable numbers, during the summer. Its winter resorts in America have not been mentioned by authors; and the Prince of MUSIGNANO informs us, that it is exceedingly rare in the United States. It is notoriously greedy and voracious, preying not only on fish and small birds, but on carrion of every kind. One specimen killed on Captain Ross' expedition disgorged an auk when it was struck, and proved, on dissection, to have another in its stomach. Unless when impelled to exertion by hunger, it is rather a shy, inactive bird, and has little of the clamorousness of others of the genus. There is a considerable variety in the size of individuals. Captain SABINE found most of his specimens smaller than the L. marinus, but the largest individual of either species which he met with, was a male of L. glaucus, killed in Barrow's Strait. Its length was thirty-two inches; extent of wing sixty-five inches; weight four pounds and a quarter. Its tarsus was three inches and a half long, and its bill, which was prodigiously strong and arched, measured upwards of four inches. The eggs of this Gull are pale purplish-grey, with scattered spots of umber-brown, and subdued lavender-purple."

My figures were taken from specimens kindly presented to me by my friend Captain JAMES CLARKE ROSS, R. N.

Met with in Labrador in summer. Baffin's Bay and Arctic Seas generally. Not observed within the limits of the United States.

Bill shorter than the head, stout, compressed, higher near the end than at the base. Upper mandible with the dorsal line nearly straight for half its length, declinate and arched towards the end, the ridge convex, the sides very rapidly sloping and slightly convex, the edges sharp and somewhat inflected, the tip rather obtuse. Nasal groove rather long and narrow; nostrils in its fore part, lateral, longitudinal, linear-oblong, wider anteriorly, pervious. Lower mandible with the angle long and narrow, the outline of the crura decurved toward their junction, where there is a prominence, beyond which the outline ascends and is slightly concave, the sides erect and nearly flat, the edges sharp and a little inflected.

The plumage is very full, close, elastic, soft, and blended, on the back somewhat compact. Wings very long, rather broad, acute; the first quill scarcely two-twelfths of an inch shorter than the second, which is longest, the rest of the primaries rapidly graduated; secondaries broad and rounded. Tail of moderate length, nearly even, being slightly rounded, of twelve broad rounded feathers.

Bill gamboge-yellow, with a carmine patch towards the end of the lower mandible, and the edges of both mandibles at the base of the same colour. Edges of eyelids red, iris yellow. Feet flesh-coloured, claws yellowish. The head, neck, lower parts, rump, and tail, are pure white; the back and wings light greyish-blue; the edges of the wing, and a large portion toward the end of all the quills, white.

The Female, which is somewhat less, resembles the male.

The bill is yellow to a little beyond the nostrils, black at the end; the feet flesh-coloured, the claws dusky. The iris brown. The general colour of the plumage is very pale yellowish-brown; the feathers of the back with a large dusky spot towards the end; the quills and tail-feathers barred with the same. 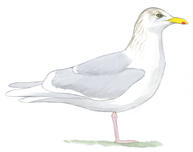