Nothing ever gave me more pleasure than the meeting with a bird long since discovered, at a time when I could fully study its habits. I had frequently searched for this interesting little Titmouse in the State of Maine, where it breeds, but always without success, nor was it until I visited Labrador, that I had an opportunity of seeing it.

On the 18th of July, after an early breakfast (at three o'clock), my party, accompanied by our captain and myself, left the Ripley in three boats for the main shore, distant about five miles. Although the fog was thick, the wind was fair, and we reached the land in safety, when we immediately commenced our search for birds. Having traversed an extensive marsh, without finding any thing of interest, the captain and I, fatigued and depressed by our want of success, retired to what in that country is called a wood, with the hope of mending our fortune. We separated and with great difficulty made our way among the stubborn tangled trees. Only a few minutes had elapsed when the report of my companion's gun reached my ear, and I at the same time heard him shout to me to come up as quickly as possible. This I managed to do after awhile, and with much tugging and tearing; but as I approached him I heard with joy the notes of the Canada Titmouse. One had been shot, and a nest had been found. Securing both the parents and the young, which had leaped out on hearing the guns, we sat down to examine the curious fabric the birds had reared for their brood.

The nest was placed at the height of not more than three feet from the around, in the hollow of a decayed low stump, scarcely thicker than a man's leg, the whole so rotten that it crumbled to pieces on being touched. I cautiously removed the woody enclosure, and took possession of the nest, which I obtained in perfect order. It was shaped like a purse, eight inches in depth, two in diameter inside, its sides about half an inch thick. It was entirely composed of the finest fur of different quadrupeds, but principally of the great northern hare, so thickly and ingeniously matted throughout, that it looked as if it had been felted by the hand of man. It was quite elastic throughout, and rather wider at the bottom, probably in consequence of the natural growth of the young. The captain told me that he had seen the parents enter the stump, and that on his walking towards it he was immediately assailed, not only by the owners of the nest, but by several other pairs of the same species, all of which, however, had retired when I reached the spot. It is probable they had nests in the vicinity, but we did not succeed in finding any. The male, which was shot last, several times flew at me so close, that I attempted to catch it alive, but it always eluded my grasp with dexterity, perched on a low branch, and emitted its angry te-te-te-tee. The young I carried on board alive.

This hardy little bird resembles in its manners the other species of its interesting and beautiful tribe; but as the habits of our Titmice are well known, and have been already spoken of by me, I shall not here trouble you with unnecessary repetitions. Its notes resemble those of the Carolina Titmouse, but are much weaker.

This species is much scarcer in those parts of Labrador which I visited than in Newfoundland, where I found it as abundant as our northern Black-headed Titmouse. The old and young birds were moving in groups in the direction of Nova Scotia, whither I suppose they all retire in the autumn, and where I have seen the species along the roads between Halifax and Windsor. Many breed in that province, as well as in New Brunswick, and, as I have said, in Maine, where my young friend LINCOLN has at times found them. None have ever been seen as far south as even Massachusetts.

I have represented the male, the female, and the young, in the plumage in which I found them. The brown of the head is much duller in winter than in summer. The young do not acquire it until towards the spring following their birth.

Bill short, straight, of moderate strength, somewhat conical, compressed towards the end; both mandibles with the dorsal outline a little convex, the sides sloping and slightly convex, the edges sharp, the tip acute. Nostrils basal, roundish, concealed by the recumbent feathers. The general form is slender. Feet proportionally large; tarsus of moderate length, anteriorly covered with a few long scutella, and sharp behind; hind toe very large and strong, the two lateral nearly equal, the outer united at the base with the middle; claws large, arched, much compressed, very acute.

Bill black. Iris very dark brown. Feet lead-colour. The general tint of the upper parts is dull leaden, tinged with light brown, the head umber brown; primaries edged with pale greyish-blue. The throat and fore neck are deep black, that colour being separated from the brown of the head by a broad band of white running under the eye. The breast and belly greyish-white, the sides light yellowish-brown.

The female resembles the male, but the upper parts are deeply tinged with brown, and the head and throat are of a lighter tint.

Bill greyish-blue. Upper parts of a dull greenish-grey. The throat marked as in the adult, the under parts pale greyish, tinged with brown.

The plant represented in this plate is abundant in Labrador, Newfoundland, and our Northern States. It is a species of Prunus, and attains a height of eight or ten feet. 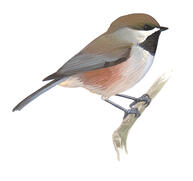