Read more about these species in our Bird Guide: Western Tanager, Scarlet Tanager

WILSON was the first ornithologist who figured this handsome bird. From his time until the return of Mr. TOWNSEND from the Columbia river no specimen seems to have been procured. That gentleman forwarded several males in much finer condition than those brought by LEWIS and CLARKE. Some of these I purchased, and, on his return to Philadelphia, I was presented with a female by my young friend Dr. TRUDEAU. The account of this species is by THOMAS NUTTALL, who, however, was unacquainted with the female.

"We first observed this fine bird in a thick belt of wood near Lorimer's Fork of the Platte, on the 4th of June, at a considerable distance to the east of the first chain of the Rocky Mountains (or Black Hills), so that the species in all probability continues some distance down the Platte. We have also seen them very abundant in the spring, in the forests of the Columbia, below Fort Vancouver. On the Platte they appeared shy and almost silent, not having there apparently commenced breeding. About the middle of May we observed the males in small numbers scattered through the dark pine forests of the Columbia, restless, shy, and flitting when approached, but at length more sedentary when mated. We frequently traced them out by their song, which is a loud, short, slow, but pleasing warble, not much unlike the song of the Common Robin, delivered from the tops of the lofty fir-trees. This music continues at short intervals throughout the whole forenoon, during which time our songster is busily engaged in quest of such coleopterous insects and larvae as are to be found on the young branches of the trees he frequents, and which require an assiduous and long-continued search to gratify his wants. Of the female and nest we are still ignorant, though they are in all probability very similar to those of our other known species. We have not seen this bird as far south as Upper California, though it may exist in the thicker forests remote from the coast, which we had no opportunity of visiting."

Mr. TOWNSEND says that "this handsome bird is called Ik kok koot by the Chinook Indians. It is rare on the banks of the Platte, but rather common in the woods and oak groves of the Columbia. None were seen after leaving the Black Hills, until we reached the lower country. Its voice is generally harsh, being a low and guttural churr, but it at times sings with considerable spirit. The female is very silent and retired in her habits, and is therefore seldom seen."

Bill rather short, robust, tapering, compressed toward the end, acute. Upper mandible with its dorsal outline declinate and slightly convex, the ridge rather narrow, the sides convex, the edges sharp, overlapping, with two slightly prominent small festoons about the middle, and a distinct notch close to the tip, which is a little declinate. Lower mandible strong, with the angle short and wide, the dorsal line straight, the back broadly convex, the sides convex, the edges sharp, the tip acute. Nostrils round, basal.

Plumage soft, blended; feathers of the head stiffish, with silky lustre; bristles at the base of the upper mandible small. Wings of ordinary length, the second quill longest, the first four having the outer web attenuated towards the end; secondaries slightly emarginate. Tail rather long, straight, emarginate, of twelve feathers.

Bill dull greenish-yellow, brown along the ridge. Feet greyish-blue. The head all round is of a beautiful rich carmine, fading gradually on the nape, paler on the throat and fading on the fore neck; the rest of the neck, all the lower parts, two bands on the wing, formed by the middle coverts, and the extremities of the secondary coverts, together with the rump and upper tail-coverts pure bright yellow. The anterior half of the back, the scapulars, two bands on the wings, and the inner secondaries black, the latter broadly margined at the end and tipped with yellowish-white; alula, primary coverts, and primary quills chocolate-brown, margined with yellowish-white; tail black, the feathers narrowly tipped with greyish-white, and slightly margined toward the end with yellowish-white.

Bill dusky brown above, light greyish-yellow beneath. The head, ear-coverts, and hind neck, dull green, as is the rump; the middle of the back and the scapulars greyish-brown, tinged with green. Anterior wing-coverts greyish-brown; middle coverts black, with the extremities dull yellow, secondary coverts and inner secondaries blackish-brown, tipped with greyish-white; alula, primary coverts, and primary quills chocolate-brown, slightly edged with brownish-white; tail-feathers similar, but margined with yellowish-green. The lower parts are light dull greenish-yellow, the sides tinged with grey. 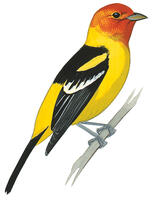