A few days after my arrival at Key West in the Floridas, early in the month of May, Major GLASSEL of the United States Army presented me with a specimen of this bird, which had been killed by one of the soldiers belonging to the garrison. I had already observed many Cuckoos in the course of my walks through the tangled woods of that curious island; but as they seemed to be our Common Yellow-billed species, I passed them without paying much attention to them. The moment this specimen was presented to me, however, I knew that it was a species unknown to me, and thought, as I have on many occasions had reason to do, how vigilant the student of nature ought to be, when placed in a country previously unvisited by him. The bird was immediately drawn, and I afterwards shot several others, all precisely corresponding with it.

The habits of the Mangrove Cuckoo I found to be much the same as those of our two other well known species. Like them, it is fond of sucking the eggs of all kinds of birds in the absence of their owners, and also feeds on fruits and various species of insects. It is, however, more vigilant and shy, and does not extend its migrations northward beyond the eastern capes of the Floridas; appearing, indeed, to confine itself mostly to the islets covered with mangroves, among the sombre foliage of which trees it usually builds its nest and rears its young. It retires southward in the beginning of September, according to the accounts of it which I received in the country.

The nest is slightly constructed of dry twigs, and is almost flat, nearly resembling that of the Yellow-billed Cuckoo, which I have already described. The eggs are of the same number and form as those of that species, but somewhat larger. It raises two broods in the season, and feeds its young on insects until they are able to go abroad.

The White-headed Pigeon is frequently robbed of its eggs by this plunderer, and it is alleged by the fishermen and wreckers that it destroys the squabs when yet very young, but I saw no instance of this barbarous propensity. One which had been caught in its nest, and which I saw placed in a cage, refused all kinds of food, and soon died. This, however, proved to me the great affection which they have towards their eggs. Their flight is much like that of the other species described by me, perhaps only more rapid and elevated when they are proceeding to some distant place.

Bill as long as the head, broad at the base, compressed, slightly arched, acute; upper mandible carinated above, its margins acute and entire; lower mandible carinated beneath, acute. Nostrils basal, lateral, linear-elliptical, half-closed by a membrane. Feet short; tarsus covered with a few large scutella, which extend around it and meet behind; toes two before, separated; two behind, one of which is versatile; their under surface broad and flat; claws slender, compressed, arched.

Upper mandible brownish-black, lower mandible yellow at the base, blackish on the margin and at the end. Iris hazel. Feet greyish-blue. The general colour of the upper parts, including the wing-coverts and two middle tail-feathers, is light greenish-brown, the head tinged with grey; primary quills umber-brown; tail-feathers, excepting the two middle ones, brownish-black, tipped with white, the outer more largely. The lower surface brownish-orange.

The female resembles the male, but is somewhat paler, especially on the lower surface, which is tinged with grey.

The plant, on a twig of which I have represented the Mangrove Cuckoo, is found on all the Florida Keys, and at times is seen growing in large patches on the mud flats that exist between the outer islets and the mainland. The leaves are thick, glossy above, furred, and of a dull brown colour beneath. 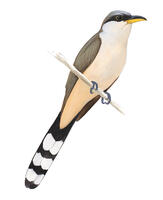