This interesting little bird enters the State of Louisiana often as early as the 1st of March. Indeed, some individuals may now and then be seen a week or ten days sooner, provided the weather be mild. It throws itself into the thickest part of the briars, sumachs, and small evergreen bushes, which form detached groves in abandoned fields, where its presence is at once known by the smartness of its song. This song is composed of many different notes, emitted with great spirit, and a certain degree of pomposity, which makes it differ materially from that of all other Flycatchers. It is frequently repeated during the day.

These birds become at once so abundant, that it would be more difficult not to meet one, than to observe a dozen or more, during a morning walk. Their motions are as animated as their music. They pass from twig to twig, upwards or downwards, examining every opening bud and leaf, and securing an insect or a larva at every leap. Their flight is short, light, and easy. Their migrations are performed during the day, and by passing from one low bush to another, for these birds seldom ascend to the tops of even moderately tall trees. Like all our other visiters, they move eastward as the season opens, and do not reach the Middle States before the end of April, or the beginning of May. Notwithstanding this apparently slow progress, they reach and disperse over a vast expanse of country. I have met with some in every part of the United States which I have visited.

Many remain in Louisiana, where they rear two broods, perhaps sometimes three, in a season. Of this, however, I am not quite certain. I never saw them alight on the ground, unless for the purpose of drinking, or of procuring fibrous roots for their nests. They are fond of sipping the dew drops that hang at the extremities of leaves. Their sorties after insects seldom extend beyond the bushes.

About the first of April, the White-eyed Flycatcher forms a nest of dry slender twigs, broken pieces of grasses, and portions of old hornets' nests, which have so great a resemblance to paper, that the nest appears as if studded with bits of that substance. It is lined with fine fibrous roots, and the dried filaments of the Spanish moss. The nest is of the form of an inverted cone, and is fastened to two or three twigs of a green briar, a species of smilax abundant in the old fields and along the fences. The eggs are from four to six, of a pure white, with a few dark spots near the larger end. In those districts where the Cow-bird is found, it frequently drops one of its eggs among them. I have seen the first brood from the nest about the middle of May. Unless when disturbed while upon its nest, this bird is extremely sociable, and may be approached within a few feet; but when startled from the nest, it displays the anxiety common to almost all birds on such occasions. The difference of colour in the sexes is scarcely perceptible.

I have ascertained that this species is a constant resident in the Floridas during winter, as well as in the lower parts of Alabama and Georgia. A great number, however, pass beyond our limits, for at Galveston Island I found them arriving from the south. It extends its movements across the whole continent, Mr. Townsend having met with it on the Columbia river. Along our Atlantic districts it is found sparingly in summer as far as Nova Scotia, and a few were seen by me in Labrador. The eggs measure four-eighths and three-fourths in length, and half an inch in breadth.

The figure of a male has been given on a branch of the tree called in Louisiana the Pride of China, an ornamental plant, with fragrant flowers. The wood is extremely valuable on account of its great durability, and is employed for making posts and rails for the fences. Being capable of receiving a beautiful polish, it is also frequently made into various articles of furniture. For these reasons, the planters have found it expedient to adopt measures for increasing the propagation of this tree. It bears a pulpy fruit inclosing a hard seed, which is swallowed by different birds during the winter months. It has been thought deleterious, but without reason. A decoction of the root is used by the planters as an effectual vermifuge.

Throughout the United States and Nova Scotia. Columbia river. Migratory, but great numbers spend the winter in the Southern States.

Upper mandible blackish-blue, lower light blue. Iris white. Feet greyish-blue. The general colour of the upper parts is light olive, the head greener. Sides of the head, including a line above the eye, and the loral space, bright yellow. Quills, large coverts, and tall, wood-brown, the quills edged externally with greenish-yellow, the larger coverts tipped with white, forming two bands. Sides of the neck tinged with bluish-grey; the under parts greyish-white, excepting the sides, which are yellow.

The female scarcely differs from the male in external appearance.


THE PRIDE OF CHINA, or BEAD-TREE.

Distinguished by its bipinnate shining leaves, with ferruginous dots beneath. In the south of Europe, the nuts are bored and strung by the Roman Catholics. 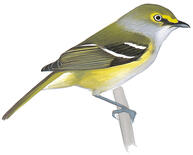