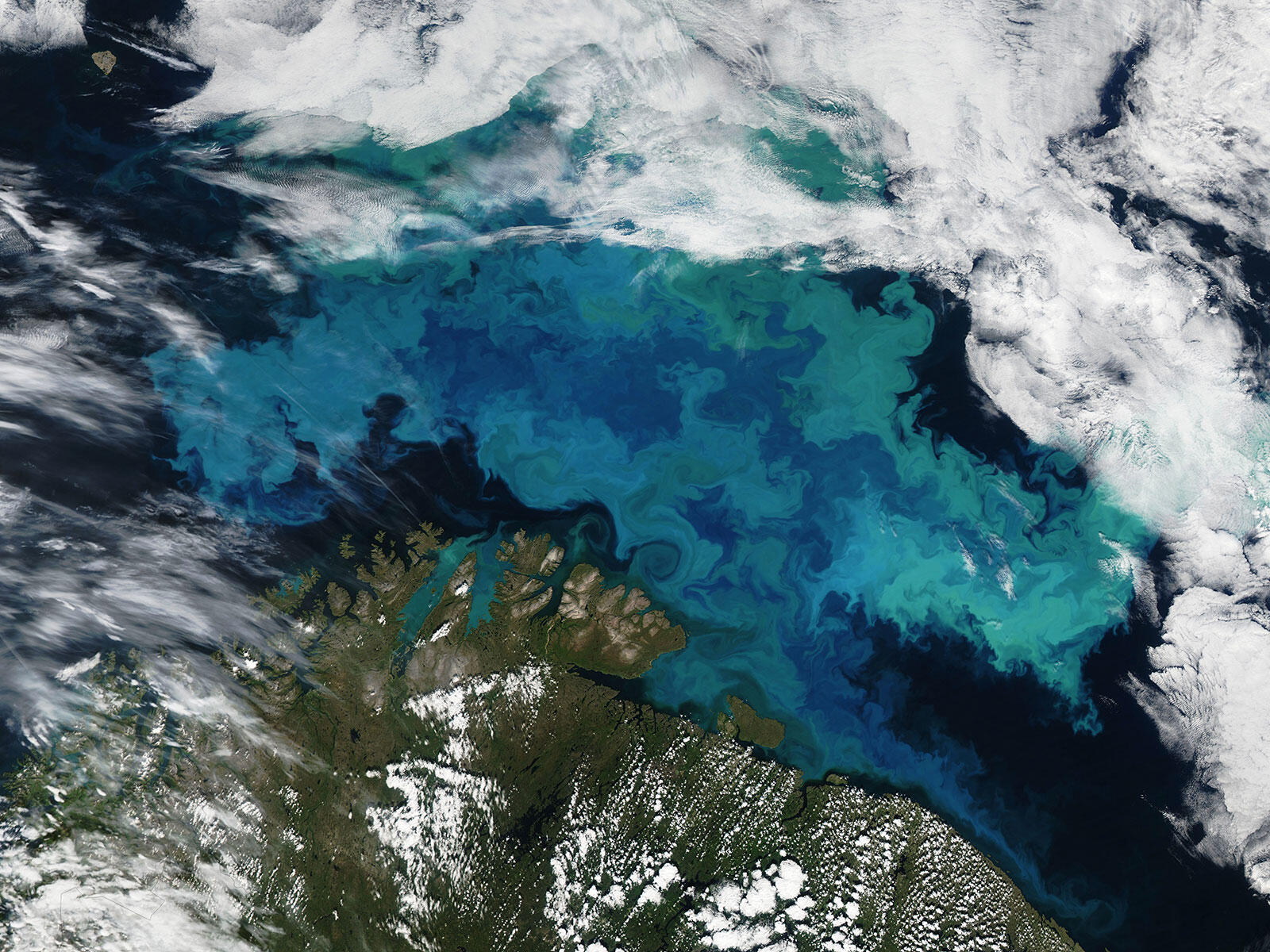 How Climate Change is Sinking Seabirds

In warming oceans, seabirds’ food chains are headed straight to the bottom.

Far out in the center of the cobalt pacific, hundreds of miles from the next atoll—about as far from a continent as it’s possible to get—Laysan Island seems like the morning of the world, a place you and I aren’t meant to see. The atoll measures roughly two by three miles; you can walk around it in a couple of hours, and as you do you’ll find a million screaming Sooty Terns swirling overhead like a living tornado. You hear, smell, and feel the heat of life at full burn.

Tiny and remote, Laysan is one speck in a small, far-flung chain. The Northwestern Hawaiian Islands, with less than 0.1 percent of the state’s land area, provide breeding grounds for 90 percent of its seabirds, about 6 million of them, representing some 20 species. In addition to the terns, there are frigatebirds, noddies, tropicbirds, and Bonin Petrels, not to mention 600,000 breeding pairs of Laysan Albatross and 60,000 pairs of Black-footed Albatross—virtually the entire world populations.

Mean elevation of these islands is five and a half feet. For many of the birds, these low platforms are all they have left. The region’s higher lands, called simply Hawaii, are taken, as are the elevated isles throughout the tropical and temperate Pacific. They are too forested or too settled, too full of pineapples and macadamia nuts, dogs and mongooses, and the primates who brought them. The low-elevation islands are already feeling the rising tide that’s coming; even people are starting to flee the lowest of them, posing a threat to the very existence of some Pacific nations.

For me, Laysan was both the endpoint and beginning of a lifelong quest. As a kid with a bicycle and a fishing rod, I searched the near horizons of local Long Island beaches for signs of terns that would lead me to bluefish, striped bass, or weakfish, which I reeled in, flopping, onto the pebbly shore or over the side of my tiny, 12-foot boat. I loved the terns so much that I followed them not just to many fresh meals but to a Ph.D., a realization of deep changes in the sea, a career, and personal acquaintances with some of the most extreme athletes of the world’s remotest seas and far-flung lands. We owe seabirds a great debt. For me, it’s personal. And in the face of climate change, Laysan helped give me a global sense of how we’re returning their favor: At the rate we’re going, if we don’t drown them, we’ll starve them.

Scientists predict up to three feet of sea-level rise during this century. After that, melting glaciers will increasingly lift rising oceans. In the same number of years that have passed since the Pilgrims landed in Massachusetts, sea level will likely climb roughly 10 feet. But storms and washovers will begin scouring islands long before they’re completely submerged. Continental beaches, too, where migrating shorebirds forage and terns, gulls, and sea turtles nest, will get increasingly eroded, squeezed between water and buildings and roads.

Other effects of changing climate on seabirds will be less obvious. Even small shifts in temperature or chemistry or salinity can have cascading effects. Warming is reducing the basic amount of food produced by oceans. It’s also changing the proportions of what lives in the sea—the ratio of sardines to anchovies, for example.

The same carbon dioxide that is warming the planet is making oceans more acidic, creating unfavorable conditions for planktonic animals, corals, and shellfish, further affecting the food chain by benefiting jellyfish. The result is what ocean ecologist Jeremy Jackson calls “the rise of slime.” If that sounds ominous, it is.

For the many seabirds that are specialized feeders, adaptation to new climates may come too slow and hard. In general, colder seas are more productive. Cool winds mix the upper ocean, keeping more nutrients in the sunlight, where plankton can use them to grow and breed. Cooler water also holds more oxygen. So when water warms, productivity declines. The results can be catastrophic. Adult birds fail to breed, abandon their nests, or worse. Entire colonies can starve and die.

In the North Atlantic, one species of oil-rich copepod, Calanus finmarchicus, which is about the size of a grain of rice, gets eaten by everything from pencil-size sandeels to right whales. They form dense swarms in certain places and at certain times. Think of them metaphorically as giant bowls of rice in the sea, and you won’t be far off. The sandeels, herring, and mackerel that eat those copepods are in turn breakfast, lunch, and dinner for terns, puffins, shearwaters, and gannets. The copepods’ abundance and productivity falls when seawater warms or—as when sea ice melts—the oceans become less salty.

Often, timing is everything. In the Bering Sea, the year’s first plankton bloom drives the entire marine food bus. That so-called phytoplankton spins the first strand in the annual food web, using photosynthesis to turn sunlight into food enough for everything that will follow. But much depends on exactly when that first massive proliferation of plankton happens. And that depends heavily upon when the winter’s sea ice melts. Under cold conditions, it melts in April to May. At that time of year, the sunlight is strong enough to fuel phytoplankton proliferation, but temperatures remain too cold to support a burst of the tiny animal “zooplankton” that grazes the phytoplankton. So the ungrazed phytoplankton drifts down to the seafloor, becoming food for amphipods and clams, which feed diving seabirds such as the Spectacled Eider and mammals like walruses and gray whales. In warmer conditions, ice melts when the days are too short to spark the bloom. By the time there’s sufficient light, the water has warmed enough for zooplankton and larval fish. Zooplankton and fish eat and carry off the phytoplankton before it reaches the seafloor. Result: The abundance of shellfish Spectacled Eiders rely on has declined.

Meanwhile, the normally cold California Current off the West Coast is one of the world’s most productive ocean systems, supporting one million to two million seabirds of about 30 species over a vast moving system of water that runs from British Columbia to Baja California. Up and down the coast, recent increases in sea temperature have caused plunging plankton density. Researchers report major declines in numbers of Sooty Shearwaters that formerly swarmed this vast conveyor of water. Cold-water divers like Rhinoceros Auklets and Cassin’s Auklets appear to be withdrawing from warming Southern California waters. “It is now apparent,” write BirdLife International researchers, “that even modest temperature rises can have a profound impact on marine ecosystems.”

On the other side of the globe, Lesser and Brown noddies, Sooty Terns, and Wedge-tailed Shearwaters are nesting later, and having less success rearing chicks coinciding with warmer sea-surface temperature. This is most obvious during warm, calm El Niño years. But poor breeding is becoming more frequent in recent years—even without El Niño.

It’s not all bad news. some seabirds are coping. In the North Sea seabird breeding success seems to be holding, despite the fact that sandeels now grow slower than they once did. Similarly, on an island 40 miles from the edge of the Tsushima Current in the Japan Sea, the timing and success of breeding between 1984 and 2009 seem to have held steady, even as warming accelerated the local current velocity and the predominant prey changed from sardines to anchovies. So far, so good.

But even slight changes can throw the system off kilter. In the 1980sThick-billed Murres in the Canadian Arctic ate mainly small Arctic cod. Now, as ice melts in the low Arctic, those cod are declining while lower-calorie subarctic capelin are moving north. Now the birds bring more capelin to their chicks. In the vast Arctic Ocean off Nunavut, Canada, researchers note, Thick-billed Murres are still fledging as many chicks—that’s the good news—but researchers note that a critical threshold of food availability may eventually be crossed.

In the tropical Pacific, where 10 million to 12 million birds, representing 30 species, breed on U.S. holdings alone, climate change will likely challenge seabirds in all of the foregoing ways—with an added twist. Many plunge-feeding seabirds such as boobies and terns rely utterly on swimming predators like tunas to drive fish and squid toward the surface. And tuna netters count on those telltale seabird flocks. From casserole to sushi roll, many a caught tuna once swam the open ocean beneath seabirds hundreds of miles from land, birds and fishes alike hunting on their respective sides of the sea surface’s looking glass. I’ve long fretted that overfishing has been depriving many birds of meals by depleting the tunas whose surface frenzies drove, for millions of years, the low-latitude world’s seabird banquets. Now it seems climate change will likely compound the problem by reducing the abundance of the small fishes tunas eat, depressing tuna survival, further depleting tuna numbers even before the nets hit the water.

From Long Island to Laysan, I have often felt my heart at home on low-lying islands thrumming with seabirds. Increasingly, though, the morning of the world appears to be aging toward the harsher light of harder prospects. Inundation or starvation—that’s not much of a choice. And as I review medium- and long-term trends, I find myself ending many a prediction with this note of desperate hope: I hope I’m wrong. I hope there will always be the inspiring, high-performance extreme birds that got me from the beaches of my childhood to the world’s vast blue expanses and unpeopled isles. Even a good, long run can be over much too soon.

Carl Safina is the author of six books and numerous articles on the human relationship with nature, especially the sea.

Top photograph: Disruptions in the timing of seasonal phytoplankton blooms—shown in blue and green in this aerial photograph taken in the Barents Sea—can drastically affect food availability for seabirds.