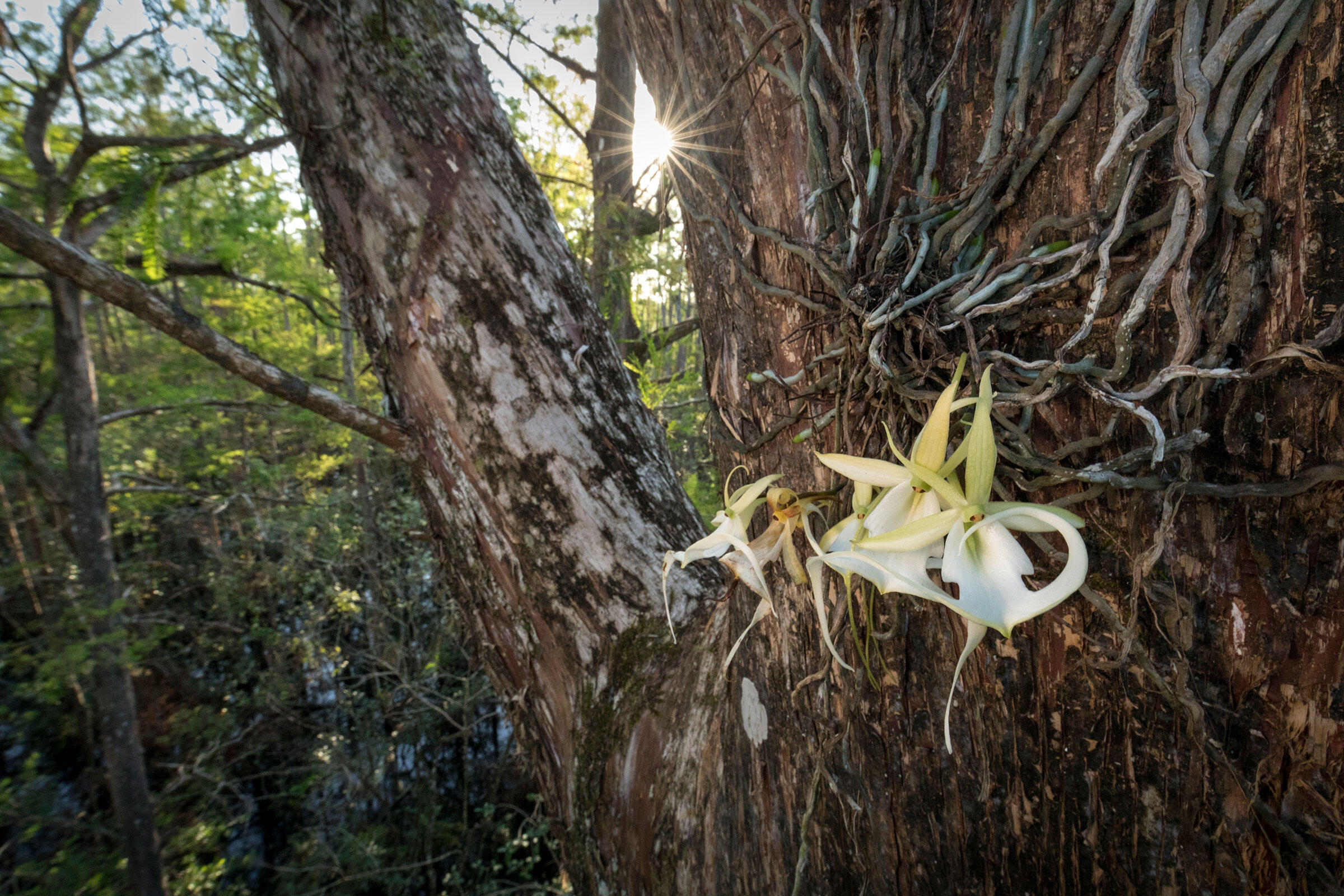 The "super" ghost orchid at Audubon's Corkscrew Swamp Sanctuary is the largest known concentration of blooms in the Everglades. While most of these mysterious plants bloom in June and July, this specimen has been documented blooming every month of the year, and in 2014 it produced more than 40 flowers. Photo: Mac Stone

Despite extensive efforts, nobody had ever definitively documented the pollination of the ghost orchid, a mysterious plant that grows in the towering trees of the Everglades—until now.

The ghost orchid is one of the rarest and most mysterious flowers in North America. Until recently, scientists could only guess at how the 2,000 or so plants that cling to the trees in Florida’s remote old-growth swamp forests are pollinated—no one had ever photographed the event before.

The ethereal flowers thrive in difficult-to-access, flooded forests and are only pollinated at night by, it’s long been assumed, a moth. The giant sphinx moth, with a proboscis long enough to reach deep into the flower’s nectar tube, was a prime suspect.

Photographer Mac Stone became captivated by this enigma after friends took him deep into a Florida swamp to a secret glade teeming with hundreds of dangling ghost orchids. In the summer of 2018, he put his climbing skills and technical prowess to use to help finally solve it. Stone enlisted Peter Houlihan, a conservation scientist from the Florida Museum of Natural History who had spent more than five frustrating years trying to catch a giant sphinx moth in the act. For months the two men climbed a tree in the Audubon Corkscrew Swamp Sanctuary that hosts a ghost orchid, setting a camera trap, waiting diligently.

Their persistence paid off, and Stone’s photographs are among the first to both confirm scientists’ hunch and point to a surprise twist. “We’re rewriting the history of this orchid,” Stone says. 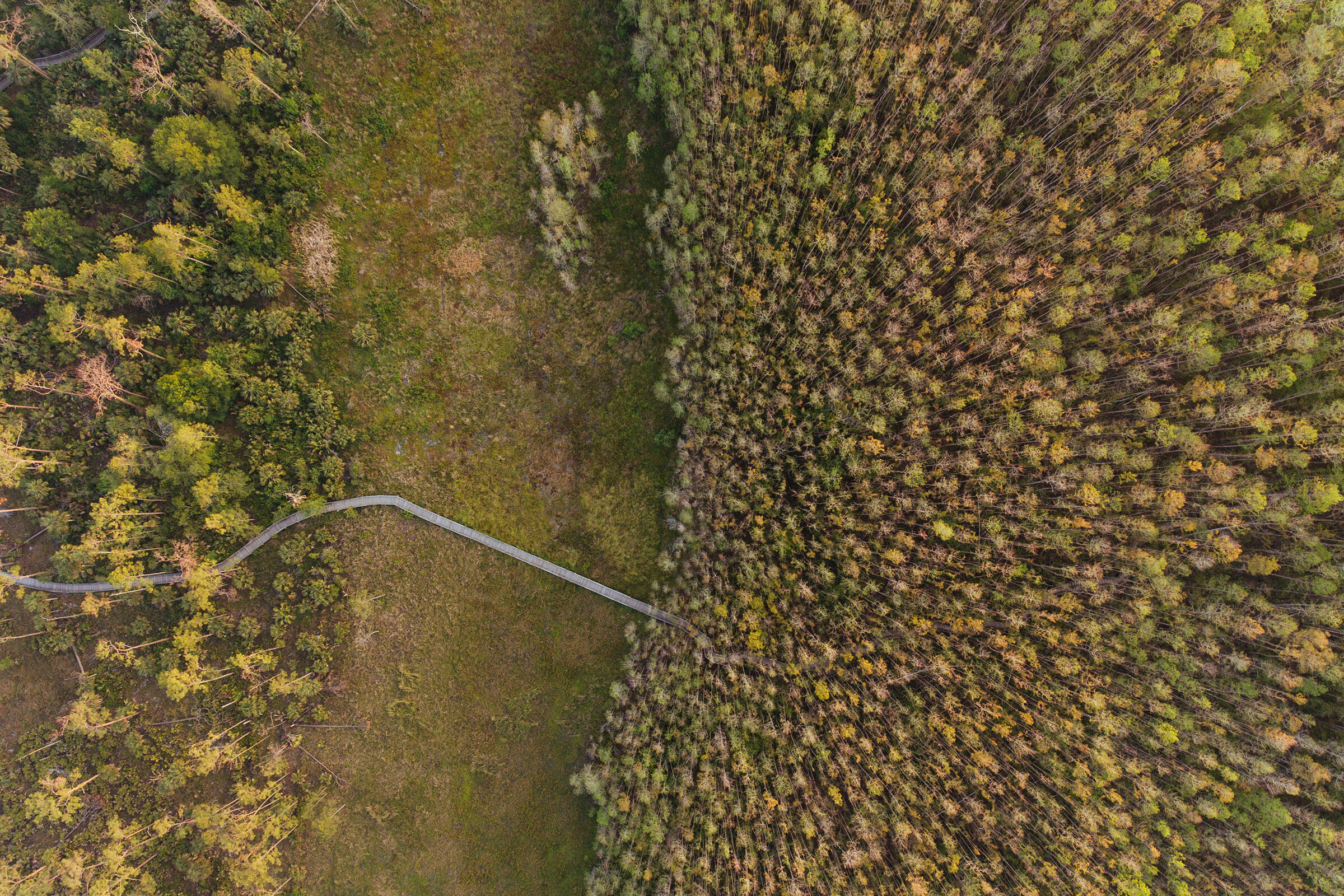 Ghost orchids—so named for their white color and thin, leafless stems that make the blooms appear to float in the air—prefer swampy, tropical forests and are found in small numbers in south Florida and Cuba. In the Everglades some hide in the canopy of tall trees, far from human reach. Those closer to the ground may fall prey to poachers, who pluck the delicate flowers from trunks and branches, flouting state endangered species laws. Unlocking secrets of the orchid’s ecology could help provide the scientific data and public awareness needed for the plant to gain federal status, says Houlihan. That would bring steeper fines for poachers as well as trigger funding to better protect the flowers and their habitat.

Stone and Houlihan didn’t have to scour the Everglades to find a flower—one was visible from the boardwalk at Corkscrew Sanctuary, 50 feet up in a towering cypress. The sanctuary has a unique, multi-stemmed “super” ghost orchid visible from the boardwalk, pictured above, that winds through the swamp forest. Audubon staff worked with the duo to ensure the project didn’t harm any of the centuries-old trees in the refuge. They also provided Stone and Houlihan with guest housing on the premises, giving them easy access to their subject. “We were hoping they would get that million-dollar image,” says Shawn Clem, research director at the sanctuary. 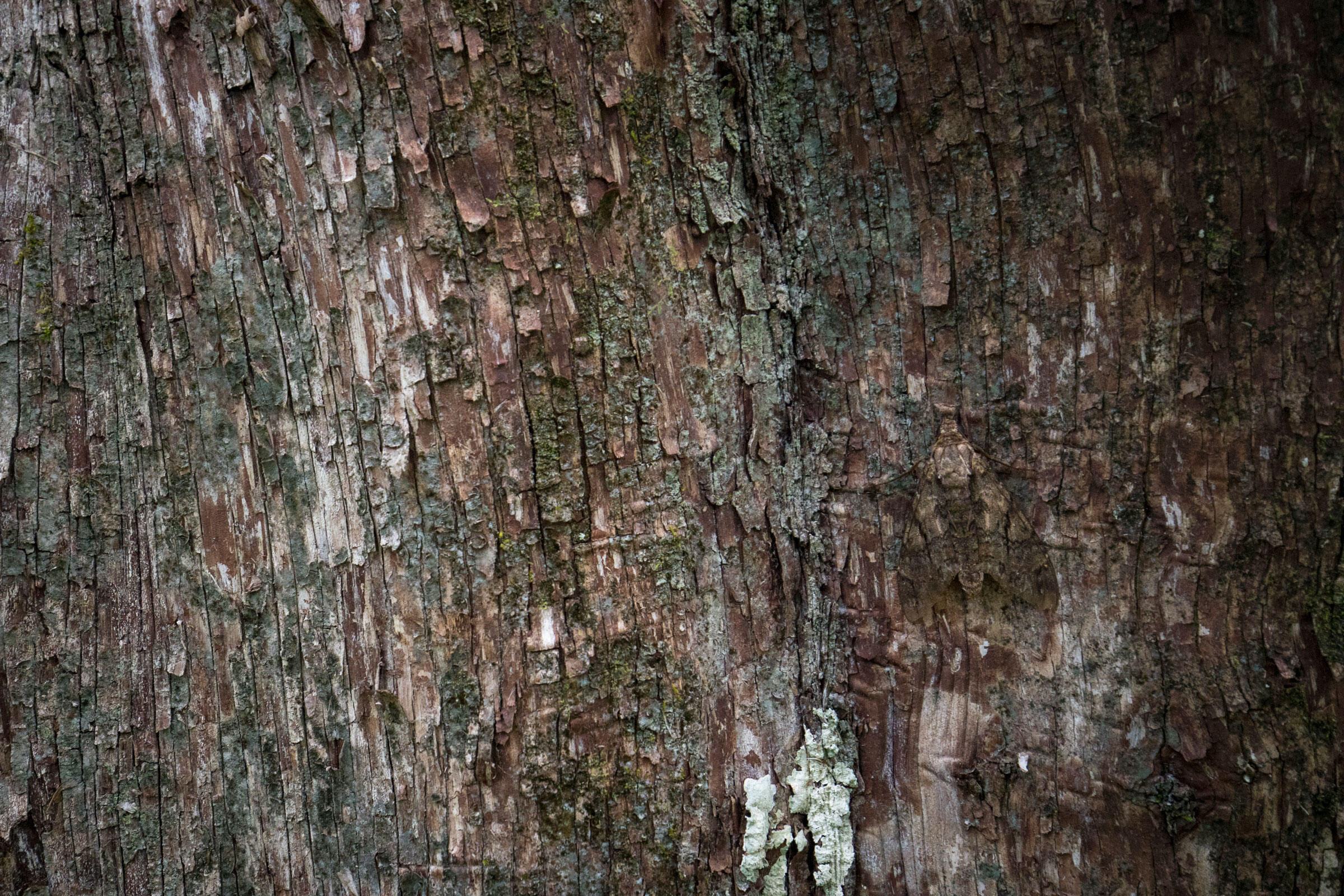 Scientists have long suspected that the giant sphinx moth, which boasts a five- to seven-inch wingspan, was the sole ghost-orchid pollinator. Look closely, and you’ll see there’s more than just tree bark in this photo. Stone happened upon this slumbering giant sphinx moth when he and Houlihan were climbing a cypress tree in Corkscrew. When Stone showed it to Houlihan, the latter was stunned that Stone had found one of the insects, given their rarity and effective camouflage. 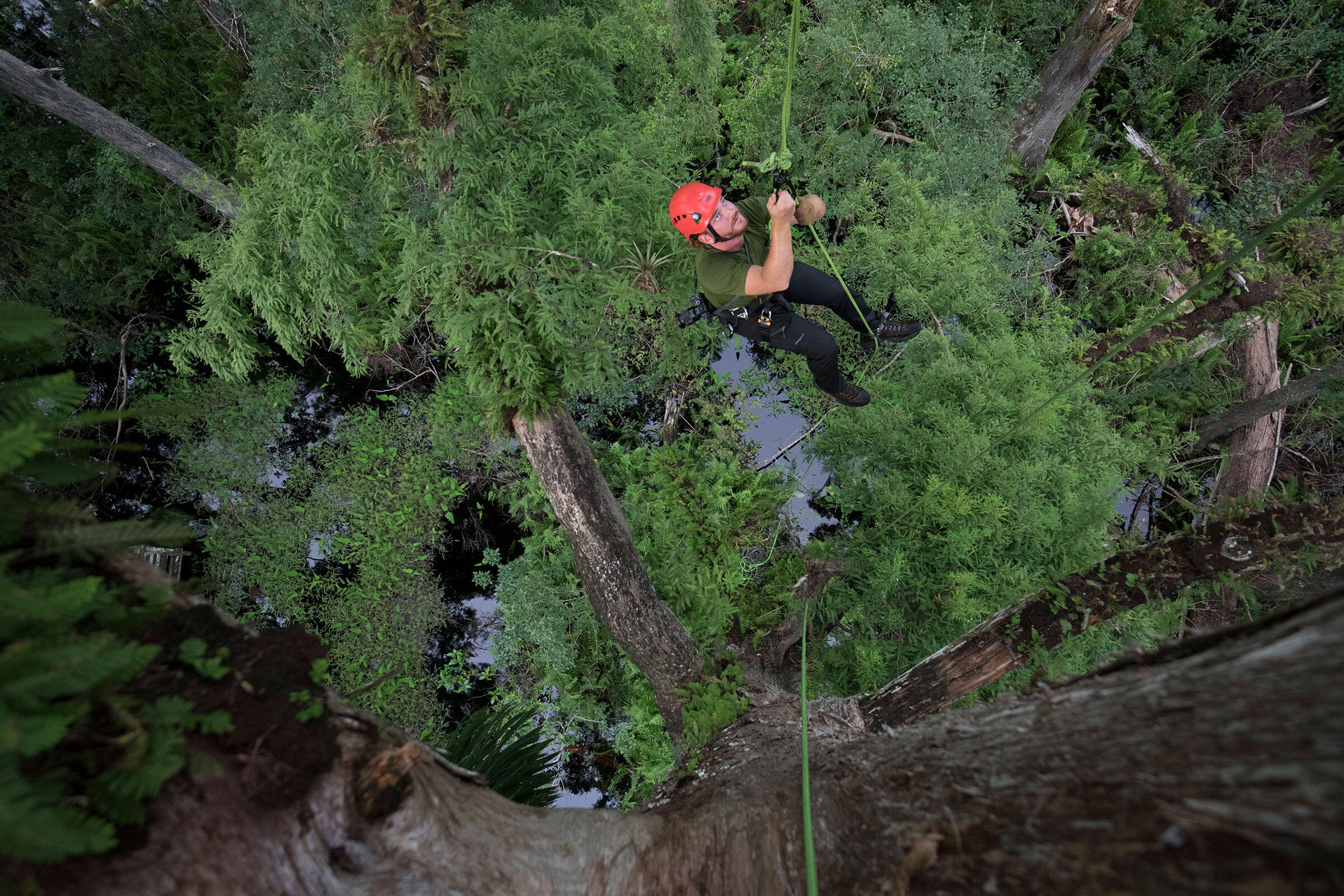 Houlihan, pictured above, learned about the ghost orchid after moving to Florida in 2012. He had conducted research on a very similar orchid in Madagascar, and he was surprised that nobody had documented its pollination. Then he started working in the Everglades. “Nobody’s willing to endure this masochism to figure this out,” he says, laughing. He tried multiple approaches over more than five years: He set up trail cameras he hoped would be triggered by a large moth but never were; he sat on ladders, infrared camera in hand, for hours on end waiting to press the shutter when the moths appeared, but they never did. Houlihan slept in the swamp, donating countless drops of blood to south Florida mosquitos. By the time Stone asked for his help, Houlihan was about to give up. “My first response was kind of like, ‘Good luck,’” he says. But he knew Stone and liked the idea of spending a few months climbing trees, so he agreed to give the project—and the mosquitos—one final summer. 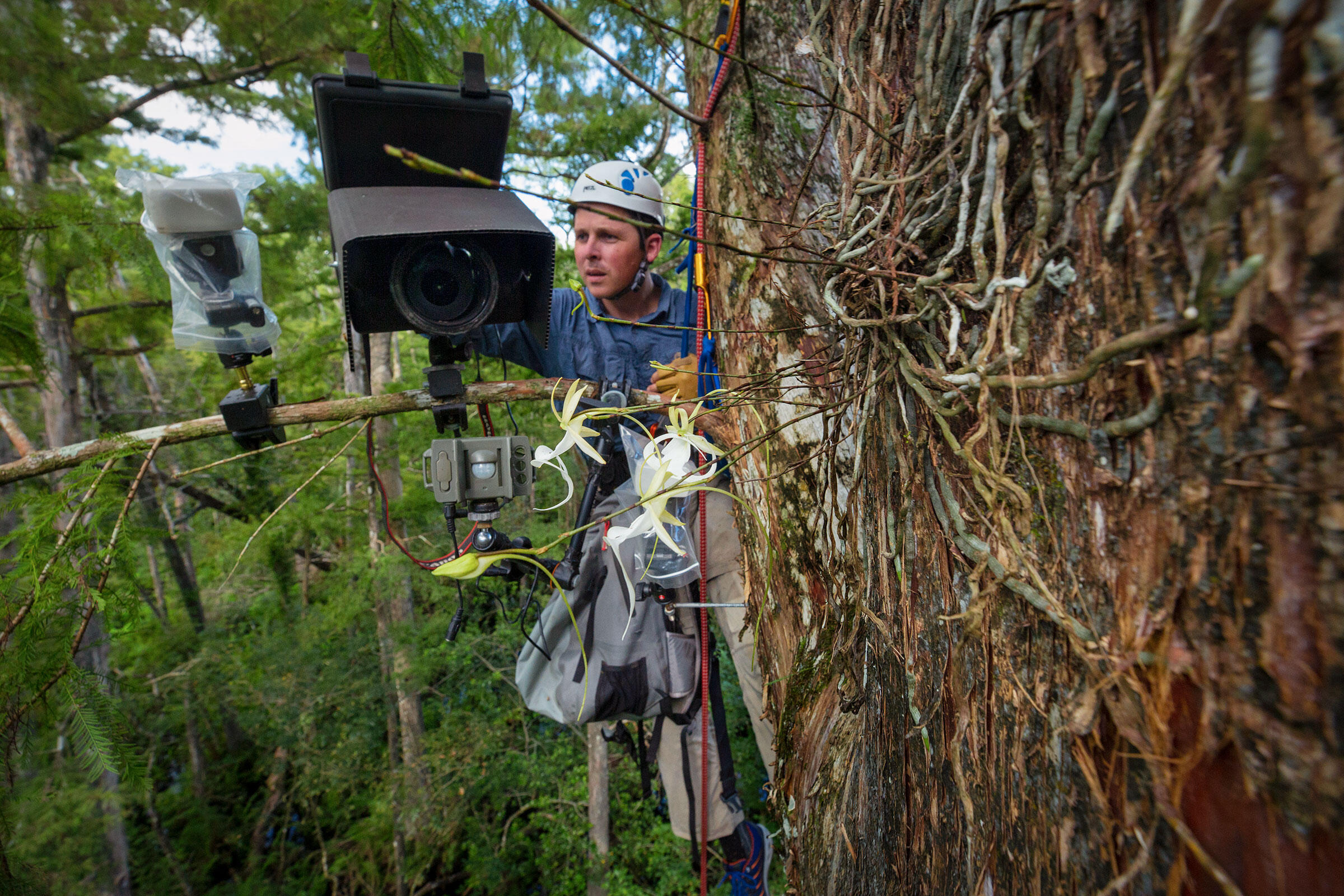 Ghost orchid pollination is a game of floral roulette. Not every flower that blooms is visited by a pollinator. Stone, pictured above, knew chances were slim that he’d be sitting at the right flower at the right time. So he used a cutting-edge camera that fires when it senses movement and slight temperature change, indicating a living creature has moved into the frame. Obsessed with the perfect shot, throughout the summer the South Carolina–based photographer made last-minute trips to Florida to tweak his camera settings and position. At first, Stone secured his equipment to an existing limb (pictured here). Worried that it wasn’t sturdy enough, he ultimately fashioned a steel arm that he strapped to the tree to hold the gear. 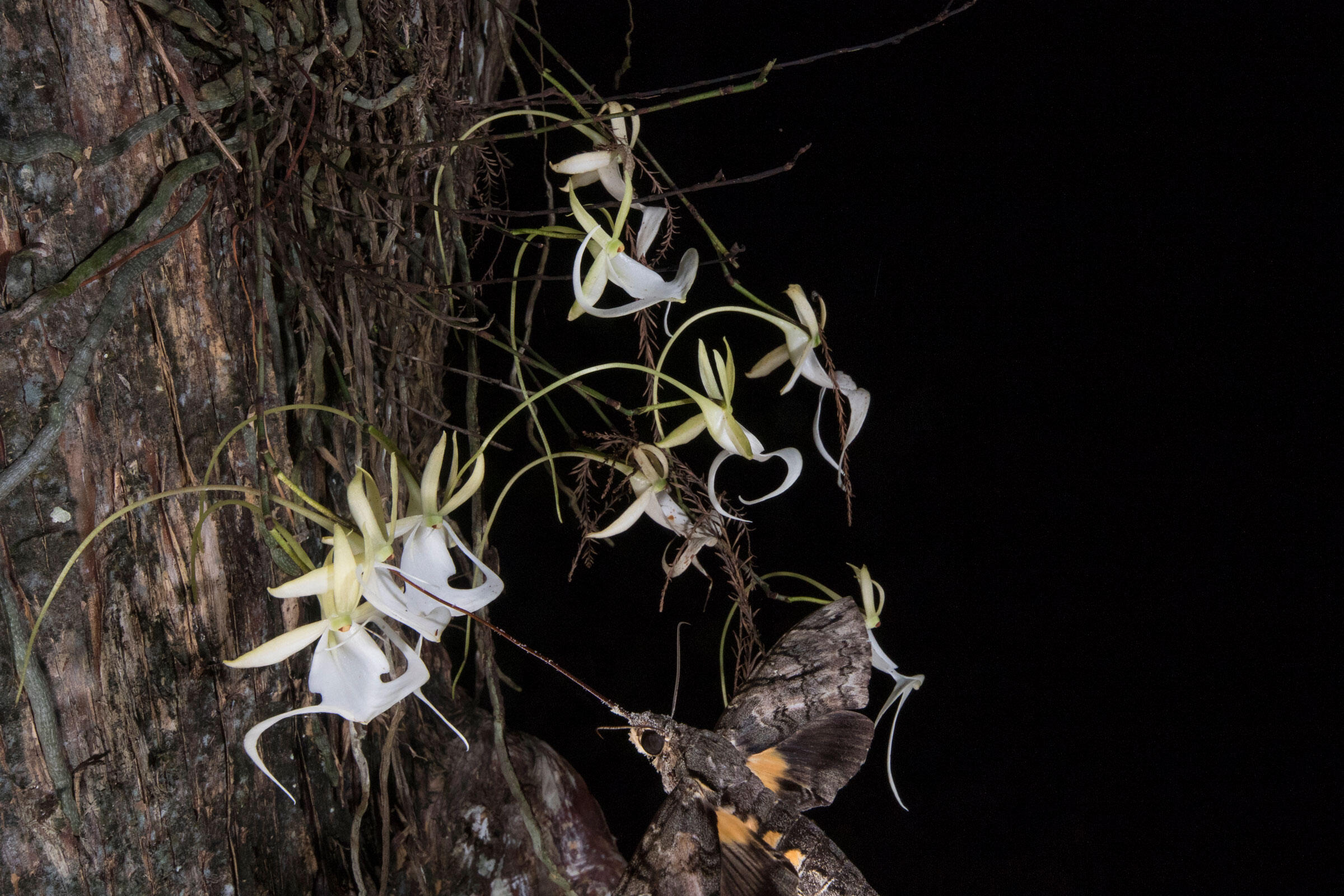 About three weeks in, Stone’s camera snapped a photo of a giant sphinx moth, above, visiting the flower. These photographs are among the very first to document the pollination of the ghost orchid. Scientists had long suspected the giant sphinx moth of doing the deed. 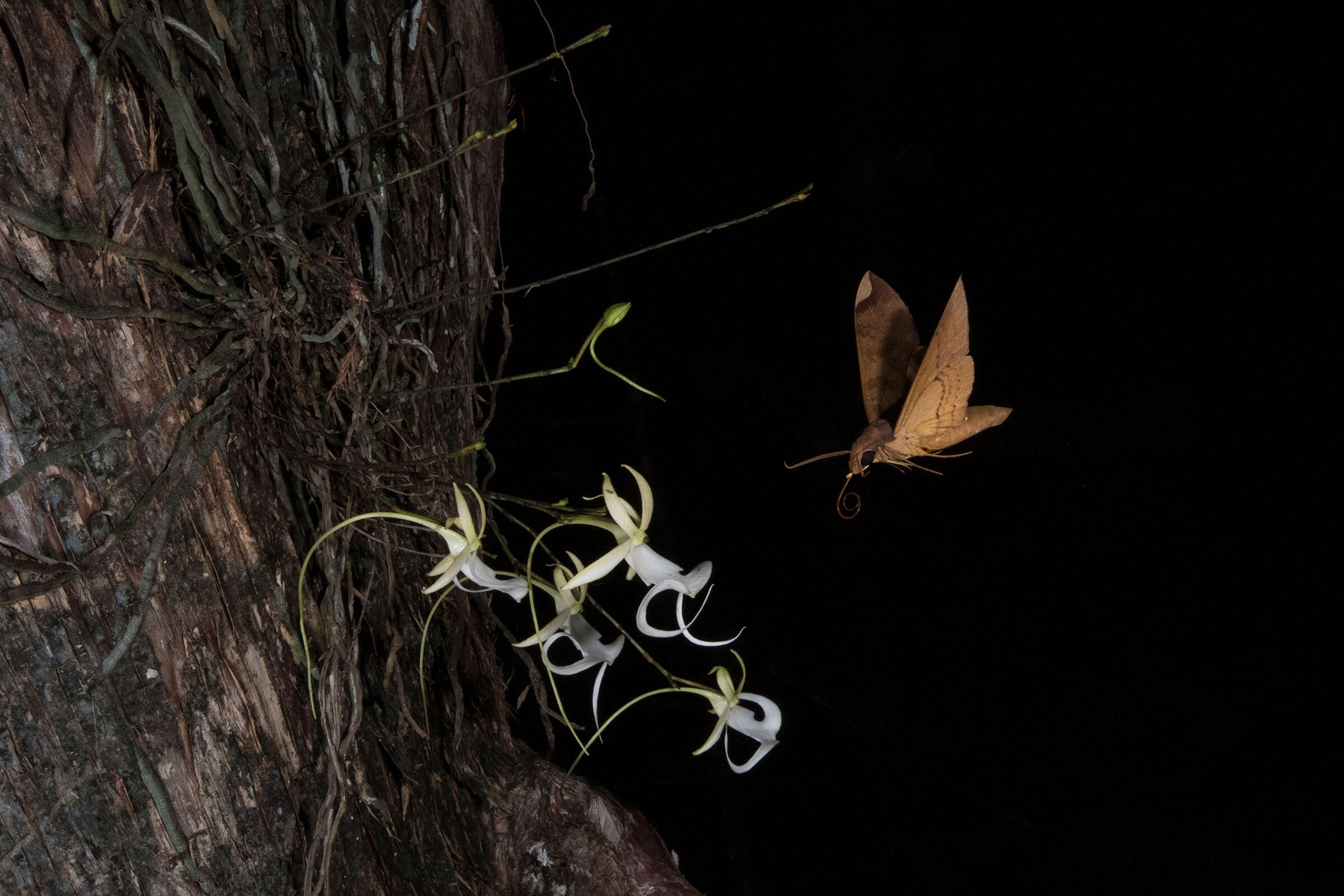 But the cameras captured a fig sphinx moth, above, visiting the orchid, too, and only it has a visible orange packet of pollen on its nose. This suggests the fig sphinx moth, which has to get closer to the flower to access its nectar and thus may pick up more pollen, might be doing more to pollinate it—though it may have help. Photographer Carlton Ward, who was also trying to capture the elusive behavior at the nearby Florida Panther National Wildlife Refuge last summer, documented six types of moths feeding on ghost orchids. Together, Stone’s and Ward’s images have upended long-held assumptions about ghost orchid pollination. 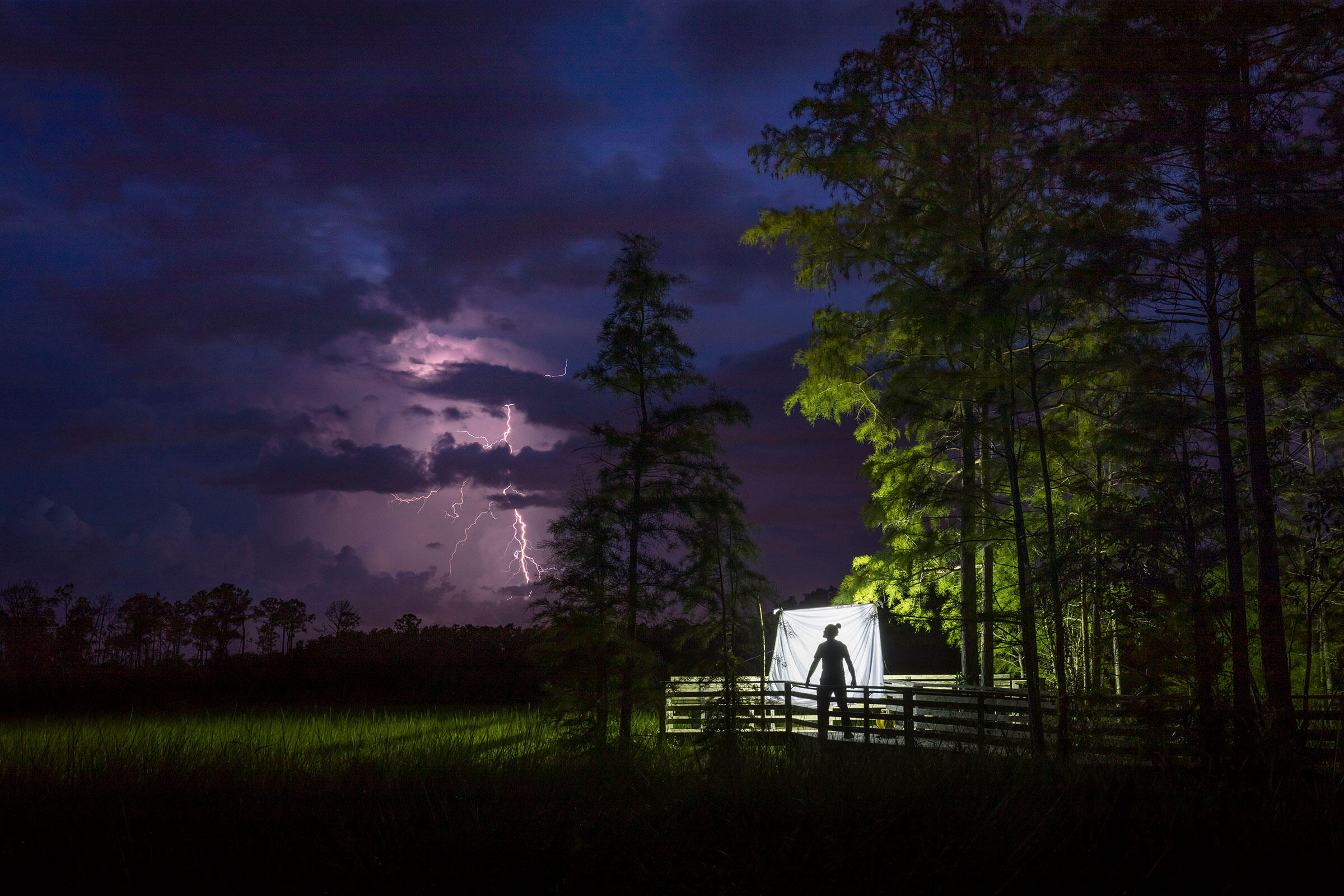 Stone and Houlihan also set about getting a close-up look at the moths from the ground. Houlihan broke out the light-trapping gear he used during his own ghost orchid search. As the beacon attracted insects to the cloth, a storm formed in the distance, allowing Stone to snap this captivating image of science in action.

For the first time, Houlihan, pictured above, managed to attract a giant sphinx moth to his light trap. Based on Stone’s photos, Houlihan thinks the insect’s proboscis might actually be too long to pollinate the ghost orchid. This means the sphinx could simply be stealing nectar from the ghost, without helping to pollinate it—leaving that to the fig sphinx moth and the other moths that Ward documented. 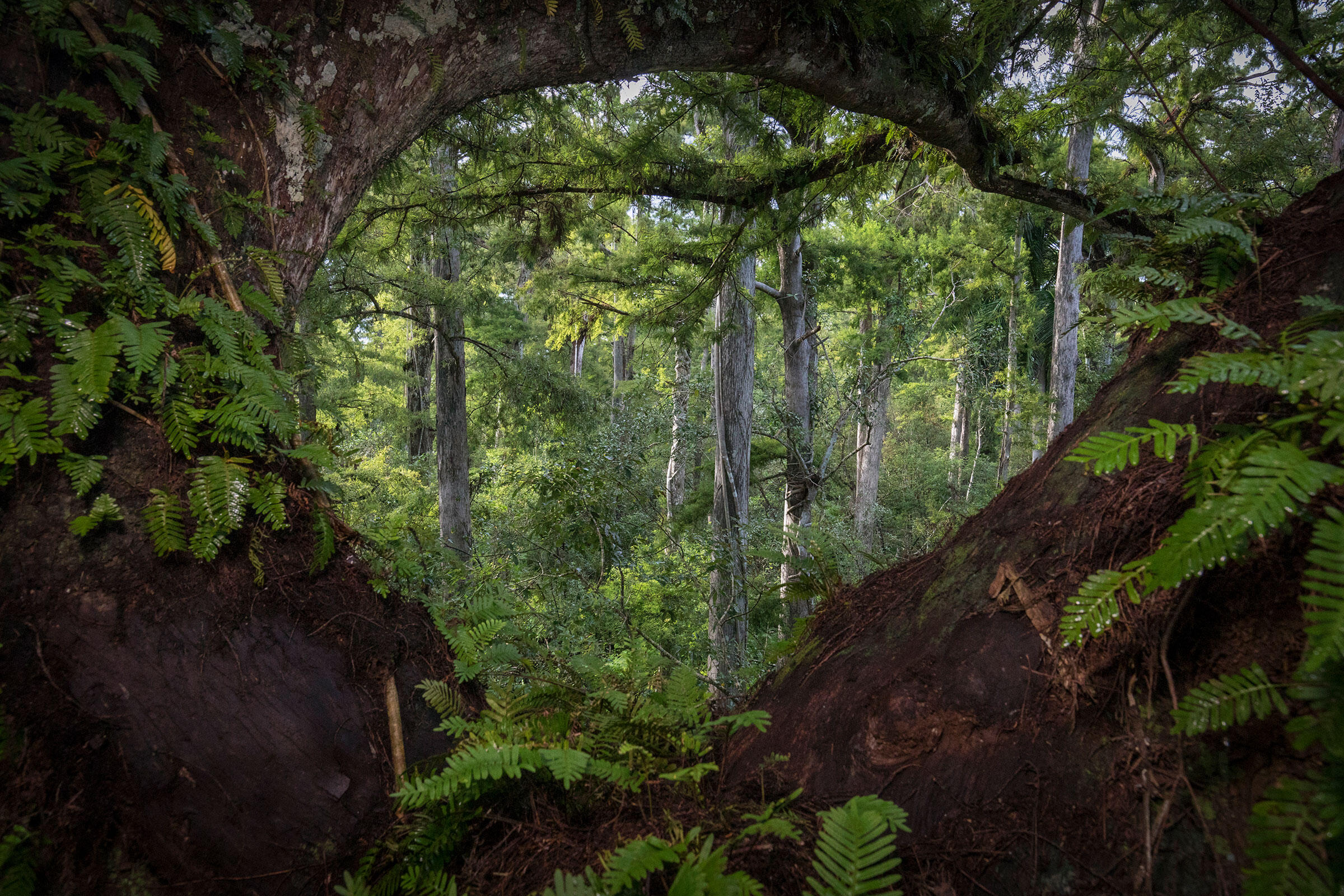 The “super” orchid in Corkscrew that facilitated Houlihan and Stone’s discovery was itself only discovered in 2007. Clem, the sanctuary’s research director, wonders what other magnificent discoveries might be made there in the future. She says that solving the pollination mystery underscores the importance of preserving wild and fragile places like Corkscrew, which faces multiple threats.

Development around the sanctuary is changing the swamp’s hydrology, making less water available even as climate change is causing the region to become drier. If habitat becomes too arid, the trees in the sanctuary and beyond that the ghost orchids depend on might not survive. “The old-growth bald cypress that we have is not something that could be re-created through restoration,” Clem says. “Once you lose it, it’s gone.” This discovery, and the awareness and funding scientists hope it will inspire, could help the swamp, the ancient trees, and the mysteries that cling to them survive an uncertain future.

This story originally ran in the Summer 2019 issue as “Catching a Ghost.” To receive our print magazine, become a member by making a donation today.