By Zoë Schlanger, Photography by Justin Cook, and Infographics by Katie Peek   Summer 2020

Andrew Wunderley crouches in the sand to pick up a milky white sphere. He pinches the lentil-size orb between his thumb and forefinger. It nearly pops out of his grip. The little pellet is made of brand-new plastic and has all the wondrous qualities of the material—light, smooth, and virtually forever-lasting. Many more are scattered in the high-tide line of the wide, windswept beach, the pride of Sullivan’s Island, South Carolina, a barrier island at the mouth of Charleston Harbor. He drops the pellet into a glass jar and picks up another, then another. Just offshore, container ships cut through the January fog on their way to Charleston’s industrial port.

Before plastic is formed into forks or garbage bags or iPhone cases, it is born into the world as these orbs. The plastics industry calls them pre-production pellets, or sometimes just resins. Everyone else—for reasons no one I asked seemed to know—calls them “nurdles.” Just a few months before we met on that January day, Wunderley had never heard of them. And then he received a fateful call.

Wunderley directs Charleston Waterkeeper, a group dedicated to protecting the region’s waterways. A dog walker rambling the beach contacted him after noticing a strange pearling in the sand—hundreds of white spheres pushing up with the surf. “It was almost like sleet,” Wunderley recalls.

Soon after, the state’s environmental agency and the South Carolina Ports Authority came to inspect. After they looked, they went straight to the warehouse of a shipping company called Frontier Logistics. They found pellets sprinkled on the floor, littering the truck loading zone, and pooled in crevices along the train rails. According to the state’s inspection report, these “appeared to resemble” the pellets on the beach. Frontier denied responsibility, but nonetheless paid a cleanup crew to pick up the Sullivan’s Island nurdles by hand.

For Wunderley, that was only the beginning of the story. Once he knew to look, the pellets were seemingly everywhere. His focus soon shifted from sampling for sewer contamination and patrolling creeks to shuffling in mud and sand on hand and knee in search of tiny debris, documenting what had rapidly become a serious problem.

For the past few years Charleston has been transforming into a major plastics export hub. The city is a middle step in the material’s supply chain: Companies receive train cars of nurdles from states like Texas that they then load onto container ships and send overseas. Frontier opened in 2017, and a handful of other companies have either recently begun operating or are planning facilities near the port. Evidence of this expansion has been turning up all along the coast.

Every time Wunderley goes back to this beach, high tides have washed fresh nurdles ashore. Sarah Church, a lifelong resident of the nearby community, has noticed them, too. “I have not found a spot on the beach that I haven’t been able to find them,” she says. Her father, who once clammed the nearby Breach Inlet, would be distressed when he found trash in the marsh. Now, for her, spotting pellets has become a persistent, anxious new orientation to a landscape that had been a comfort since childhood. “I can’t help it—I’m like, ‘There’s one, there’s one, there’s one.’ I walk the dog and I come back with a pocketful of nurdles.”

I later join Wunderley at another sampling site along the port near the tidal mouth of the Cooper River. As fishers cast lines from a pier, Wunderley puts on rubber waders and enters the salt marsh beneath, where the mud is riddled with fiddler crab holes. He immediately spots nurdles tucked in dead spartina grass. There are more here than on the beach that morning because tides flush them out less often. To a tiny nurdle, a blade of fallen grass is a dam.

Again, Wunderley gathers as many as he can find in 10 minutes. The scene is thoroughly Sisyphean. There will always be more. But Wunderley isn’t trying to clean the nurdles up. He is trying to prove they exist—that the problem hasn’t been solved. The spills, he believes, are ongoing. “Frontier’s attitude from the very beginning was, ‘You can’t prove they’re ours,’ ” Wunderley says. “And I’ve never been one to say no to a good challenge.”

The challenge is hardly confined to South Carolina; nurdles are turning up in waterways and on beaches all over the world. What’s more, the tiny pellets are just one symptom of a growing trend: larger volumes of cheap plastic being manufactured faster than ever. 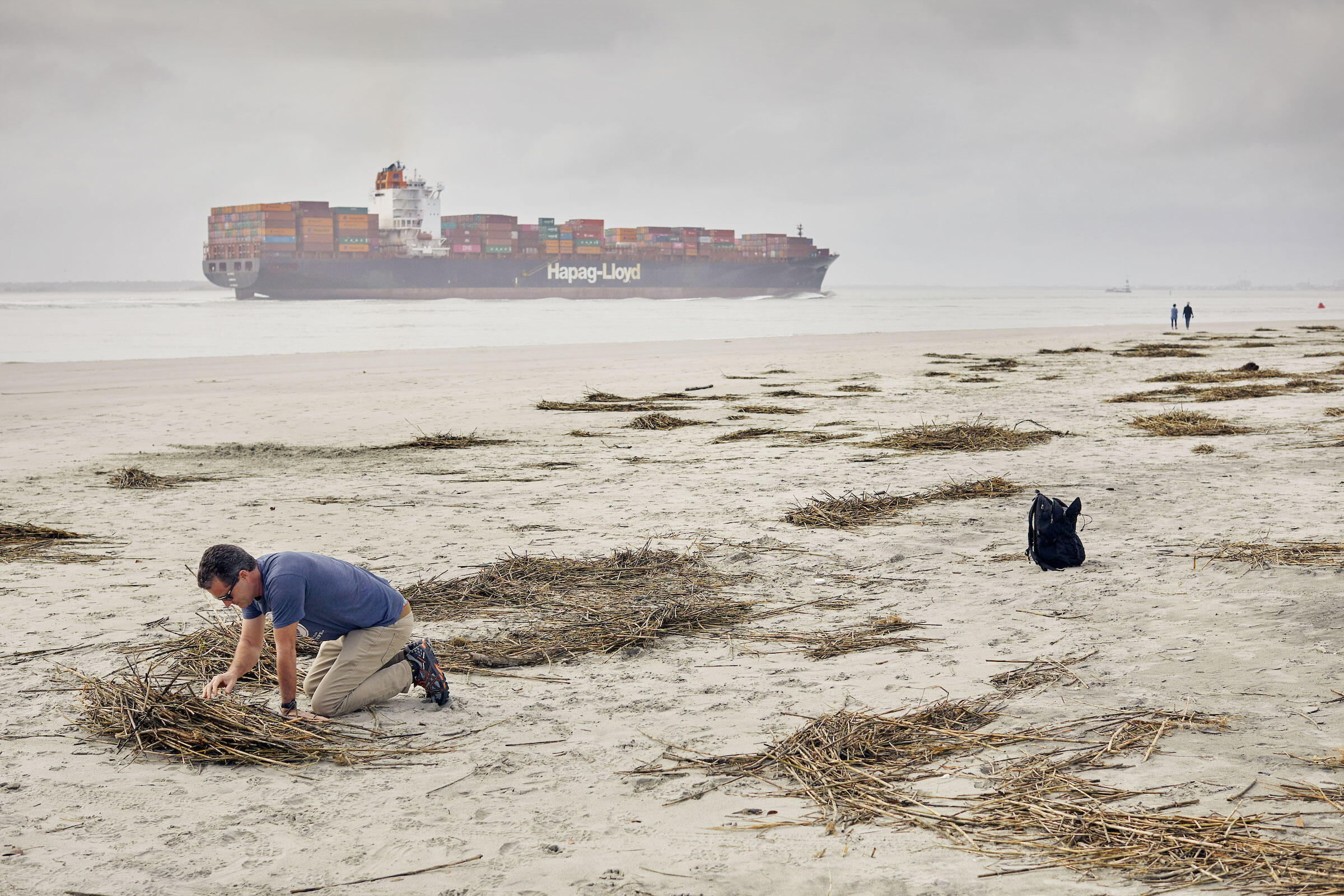 Clean-water advocate Andrew Wunderley surveys a South Carolina beach for tiny pellets that are turning up on its shores as plastics exports grow. Photo: Justin Cook

Since its invention more than a century ago, plastic has proven an endlessly adaptable building block of modern life. Its utility is only gaining. More than half of all plastic was produced in the past 15 years. Only about 9 percent made has ever been recycled. That means the vast majority of all plastic created is still here, and it’s accumulating—piling up in landfills and on riverbeds and coasts, and flaking into ever smaller particles that show up in our food supply and the falling snow.

The next 15 years are likely to deliver more plastic than the last. The United States, in particular, is investing billions into ramping up production. As of February, some 343 new plastic production plants and expansions were permitted or planned here in the near future, according to the American Chemistry Council, the plastic industry’s biggest trade group.

The driving force behind the soaring volume of plastics can be attributed to one important factor, a surplus of its raw material—fossil fuels. And in the United States one fossil fuel has become phenomenally abundant and absurdly cheap: Plastic, it turns out, is a great way to profit from the nation’s glut of natural gas.

Until about two decades ago, almost all plastic was made from crude oil, a technique that still dominates in the rest of the world (in China, plastic is increasingly made with coal). Then two developments converged. Researchers pioneered a method to “crack” ethane, previously an unusable waste product of natural gas extraction, enabling the molecules to be rearranged into ethylene, the main component of plastic. And vast deposits of natural gas suddenly became available and cost-efficient, thanks to the combined success of hydraulic fracturing and horizontal drilling.

“What led the massive boom in the construction of new plastics facilities in the U.S. was not the emergence of massive public demand for plastics, but the fact that natural gas feedstocks became incredibly cheap,” says Carroll Muffett, president of the Center for International Environmental Law, a nonprofit human rights and environmental law firm that regularly publishes analyses of the plastics industry. “The fracking boom triggered the renaissance of the plastics industry in the U.S.”

This renaissance has driven the cost down, making virgin plastic cheaper, even, than recycled plastic for the first time last year. Based on these economics alone, a manufacturer would be foolish to use anything else.

The world produced the weight equivalent of 25,000 Empire State Buildings in plastic from 1950 to 2015. If current trends continue, global annual production may roughly triple by 2050.

In 2018 North American made about 20 percent of the world’s plastic, just over half of which was polyethylene.

could cause another dip

plastic production is one

percent of the world’s total.

reach 15 percent, or about The world produced the weight equivalent of 25,000 Empire State Buildings in plastic from 1950 to 2015. If current trends continue, global annual production may roughly triple by 2050.

This year’s economic crisis could cause another dip.

In 2018 North American made about 20 percent of the world’s plastic, just over half of which was polyethylene.