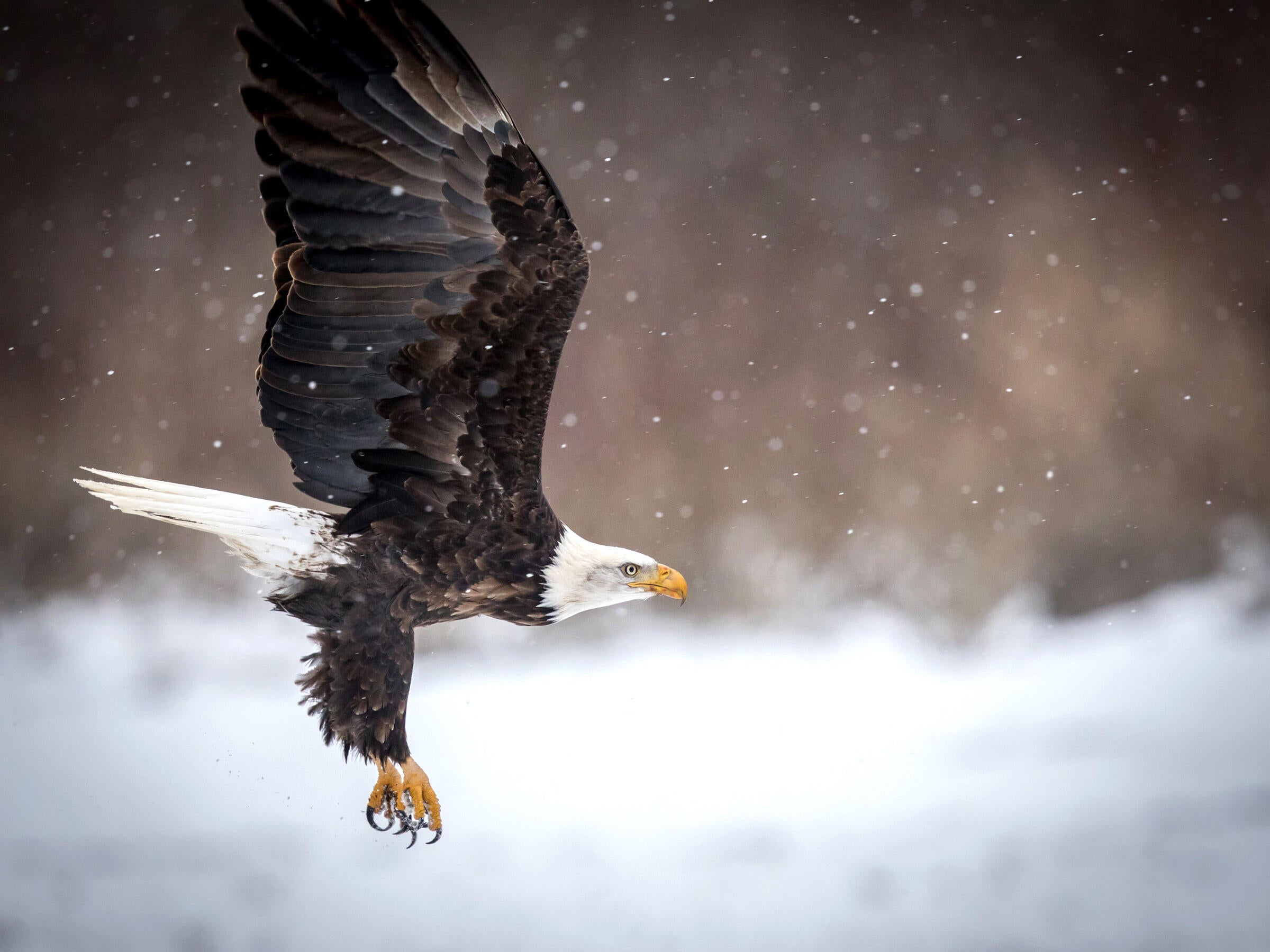 They're big, they're back, and the camera loves them.

Fifty years ago, if you wanted to see our national symbol in the flesh (or feather), you’d have been searching for a long time: By the 1960s, just 487 breeding pairs of Bald Eagles remained in the Lower 48. Since then the species has made a major comeback, and today that number exceeds 10,000. The qualities that make the Bald Eagle such a potent patriotic symbol—its fierce strength and grand wingspan—also make it a perfect photography subject, especially against a stark winter backdrop. Here are some tips for getting a shot that faithfully captures all that majesty.

Metering the light for proper exposure is probably the hardest technique to master when it comes to photographing mature Bald Eagles; the combination of their dark plumage and white head makes it difficult to attain an even exposure between the two extremes. Try using a center-weighted mode, metering the mid-value tones of a scene, and then adding or removing light to create the best exposure.

For example, a mature eagle sitting in a mid-toned scene may need additional light to get more detail in the dark feathers. If, on the other hand, the highlights in the white head are overexposed, you can take light away to just below where the highlights in the histogram start blinking. To do this in TV (shutter priority) or AV (aperture priority) modes, use your exposure compensation. In manual mode, this change can be made by adjusting aperture or shutter speed. But remember to keep an eye on your other settings as your make changes.

The other trick to nailing exposure is to start with good light. Avoid photographing eagles in the mid-day sun, which can create harsh shadows and makes it difficult to keep the whites or darks within the camera's tonal range ability. Early morning light is ideal, but bright, cloudy days also work well with eagles; soft light makes it easier to create an even exposure throughout the tonal range. And don’t put that camera away on foul weather days—some of the most dramatic and interesting images can be made when the weather is at its worst.

Photographing Bald Eagles comes with some unique challenges, but you do have size on your side: Because the bird is large, it's easier to keep your focus on its eye, or at least on its head, even when it is in flight. When you’re shooting a burst of frames of an eagle moving across the sky, set your camera to continuous autofocus to improve the tracking.

With eagles, as with all birds, taking the time to learn about their natural behavior makes it easier to predict their actions. And that allows you to make sure you're in the perfect position, with your lens aimed in the right direction and your camera settings ready, to get that great shot.

One good example: Food fights. In the Pacific Northwest, where Bald Eagles compete with Great Blue Herons for fish, an eagle will fly straight at a heron with significant speed in an effort to get it to drop its catch. It’s difficult to follow a speeding target with a long telephoto lens, so if you suspect this scenario is about to play out, instead of following the eagle with your camera, focus your attention on the heron, keeping an eye on the eagle as it approaches. Focusing on the heron before the eagle reaches the scene makes it more likely you'll capture the moment of peak action.

Don’t neglect shutter speed when photographing eagles—it’s one of the primary reasons for soft images. Though a slower shutter speed might work when your eagle is perched, if it takes off suddenly, which eagles have a habit of doing, you're out of luck. A good rule of thumb is to try to keep at least 1/1250th of a second as a minimum shutter speed at all times when you’re shooting eagles, and up to 1/3000th of a second when trying to freeze motion in flight. And remember that the closer the bird is to the photographer, the faster the shutter speed will need to be in order to stop wing action.

Eagles will often come flying in from some distance, and you may be tempted to shart shooting as soon as you see the bird. But shooting too early can result in the buffer filling up on the camera, meaning you could be stuck waiting for it to clear right at the most inopportune moment. A safer option is to focus on the bird as it flies toward toward you, but hold off on starting to shoot until it's fairly large in the frame.