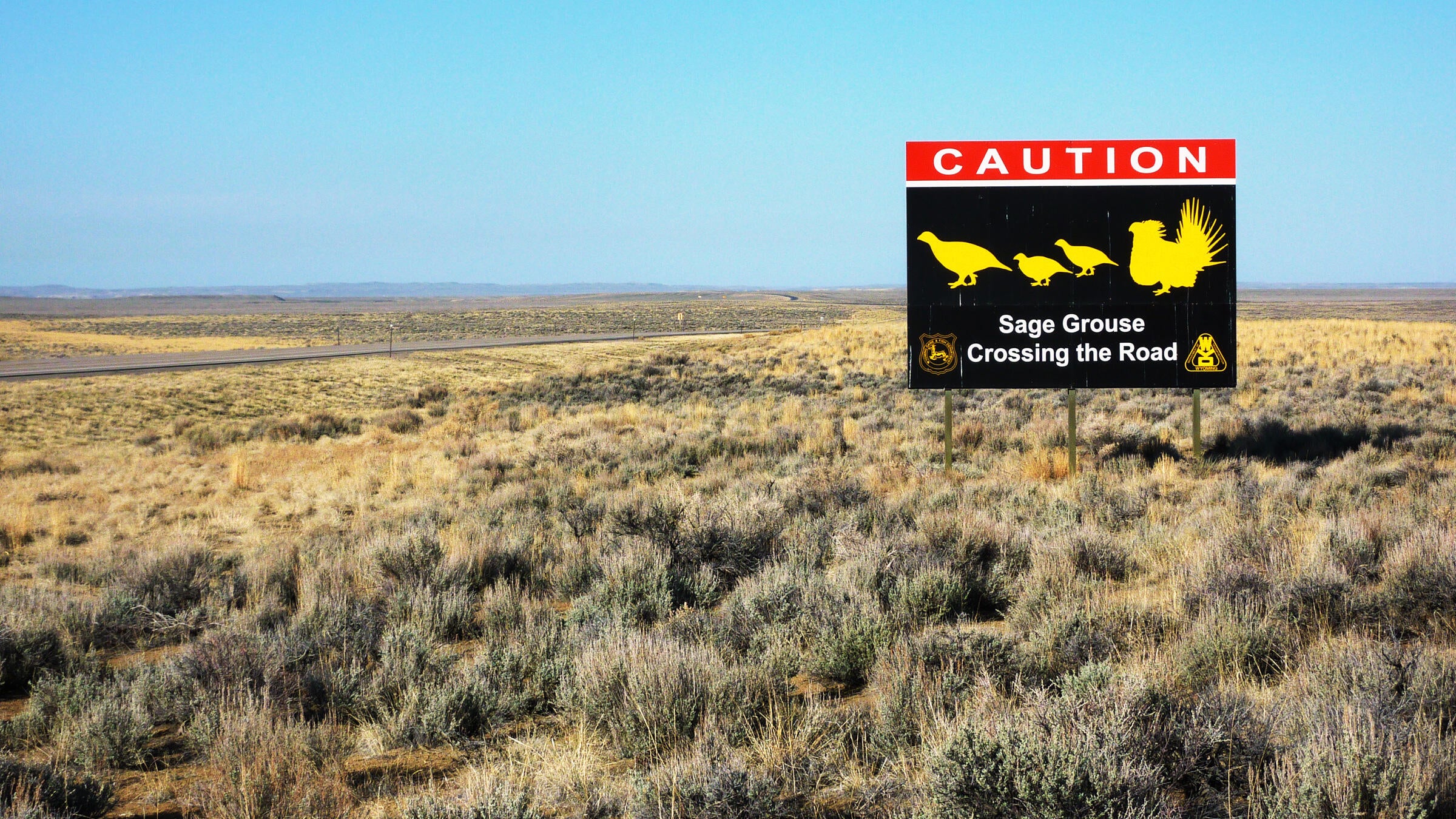 This one-of-a-kind sign alerts drivers on Wyoming's Highway 28 that a very important bird may be nearby. Photo: Mark Bellis/USFWS

The Greater Sage-grouse won’t be listed under the Endangered Species Act, but that doesn’t mean important conservation opportunities aren’t ongoing.

The spike-tailed Greater Sage-grouse, icon of the West, will not be added to the Endangered Species List, U.S. Fish and Wildlife announced today. The announcement was largely celebrated as a victory among conservationists—it means the ongoing efforts to protect the bird are working (read our full story about the decision here). An unprecedented amount of collaboration among stakeholders—including industry, ranchers, conservationists, state and local government, and landowners—has put the sage-grouse on the road to recovery.

Here’s a sampling of ways the various groups can help the sage-grouse, now and into the future:

1. Remove Invasive Plants. Sagebrush habitat may look hardy, but it’s quite delicate. The land is particularly susceptible to invasive piñon and juniper trees, which can turn the scrubby prairie into a low, thin forest. To prevent that, the Natural Resource Conservation Service, among others, partners with ranchers to remove encroaching trees from their property. This not only restores habitat for sage-grouse, but also for sagebrush songbirds. Invasive cheatgrass, imported from Asia, is also poised to take over sagebrush habitat—and since cattle can’t eat cheatgrass, ranchers and conservationists alike are eager to eliminate it.

2. Mark Fences. While in flight, sage-grouse can’t see wire fences—their eyes, situated on opposite sides of their head, are ideal for spotting predators, but not great for looking straight ahead. So the birds have a tendency to crash into the fences when they’re in the vicinity—which is a problem, because sagebrush breeding grounds (also known as leks) often overlap with fenced-off ranches. By attaching vinyl flags to fences, ranchers have already prevented between 1,500 to 1,800 sage-grouse fence strikes across the West.

3. Establish No-drill Buffer Zones. Unfortunately, some sage-grouse habitat lies right on top of major oil and gas deposits. The Bureau of Land Management will establish buffer zones around the critical leks, which will keep new wells far enough away that the birds remain undisturbed.

4. Prevent Wildfires. Fires are terrible news for sage-grouse: When sagebrush burns, it takes a long time to recover, allowing invasive species to take hold in its place. Moreover, those same invasive plants, like juniper and cheatgrass, make excellent fuel for more fires. By removing these plants, the U.S. Department of the Interior hopes to prevent catastrophic wildfires in sage-grouse habitat.

5. Establish Conservation Easements. By allocating some land as a conservation easement, private landowners can be reimbursed for permanently protecting land from development. More than 4.4 million acres of sage-grouse habitat have already been restored or conserved, saving their leks and migration paths from being overrun by agriculture or ranches.

6. Do More Research. There’s still a lot we don’t know about the sage-grouse, and how to best protect it. The USGS is encouraging research on sage-grouse genetics, breeding patterns, and ecological needs through its Greater Sage-Grouse National Research Strategy. Hopefully, their discoveries will guide conservation efforts in the future to boost the birds on their long recovery.