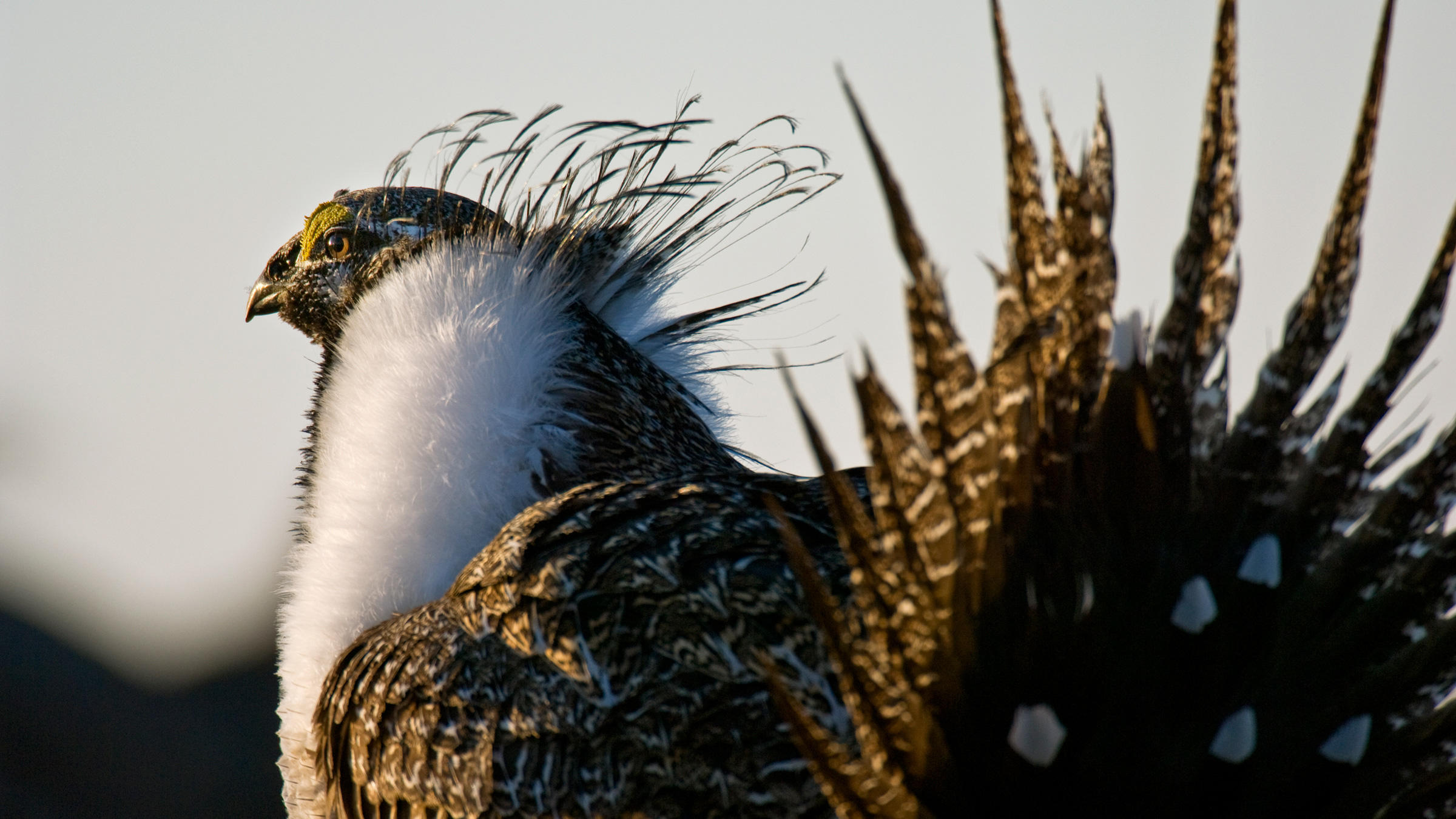 Today the U.S. Fish and Wildlife Service announced that the Greater Sage-grouse, an iconic bird of the American West, does not warrant listing under the Endangered Species Act.

Conservationists, ranchers, politicians, and industry have been on edge for months in anticipation of the decision, which was announced just days before a court-ordered September 30 deadline. The possibility of a listing had sparked fears of huge economic losses in the sage-grouse’s expansive habitat out West, as it would have restricted energy development, livestock grazing, and residential construction. States and federal agencies that control public lands have scrambled to create updated sage-grouse recovery plans in order to avert a listing. And many conservationists worried that a formal listing could undermine the serious—and pioneering—voluntary efforts taken to protect the bird’s sagebrush habitat in recent years.

Indeed, Secretary of the Interior Sally Jewell confirmed in a video released on Twitter this morning that a major factor in the determination was the cooperative efforts of federal agencies, states, private landowners, industry, and green groups to safeguard the chubby, chicken-sized bird. That includes the Bureau of Land Management’s 14 new sage-grouse recovery plans—consolidated from 98 distinct land use plans, all of which were officially formalized today—that will conserve 35 million acres of federal lands across 10 states.  In total, the collective plans to protect the bird “significantly reduced threats to the Greater Sage-grouse across 90 percent of the species’ breeding habitat,” enabling the organization to conclude that the bird did not warrant listing, FWS stated in their release announcing the decision.

“This is truly a historic effort—one that represents extraordinary collaboration across the American West,” Jewell said in FWS's statement. “It demonstrates that the Endangered Species Act is an effective and flexible tool and a critical catalyst for conservation—ensuring that future generations can enjoy the diversity of wildlife that we do today."

“This is a new lease on life for the Greater Sage-grouse and the entire sagebrush ecosystem,” said National Audubon Society President and CEO David Yarnold. “Unprecedented cooperation by private landowners, states, and the federal government has created a framework for conservation at a scale unique in the world.”

When FWS first announced that the bird would be considered for a federal listing in 2010, regional conservation efforts had already been underway. “This is exactly what Audubon has been working toward for 10 years,” says Brian Rutledge, VP and Central Flyway policy advisor for Audubon. Rutledge and his team helped create a science-based approach to sage-grouse protections that significantly reduces disturbance in core habitat—an approach that’s been adopted in state and federal plans alike. “This is the kind of cooperation the Endangered Species Act was designed to encourage,” he says. “It wasn’t intended to list everything under the sun; it was to motivate conservation before listing became necessary.”

The Enormous Effort to Stave Off a Listing

The sagebrush steppe is an old-growth forest in miniature, with some species of the fragrant shrubs living for more than a century. Development has cut the habitat to half its historical size, and today it spans 173 million acres across 11 states. The sage-grouse is inextricably linked to this sagebrush ecosystem: The plants provide cover from raptors and other predators, serve as shelter for nesting birds in the summer, and supply the grouse’s sole source of food in the winter—in fact, the birds actually gain weight eating the leaves during the harsh winter months. But as the habitat has shrunk, the birds’ numbers have plummeted, from millions a century ago to between 200,000 and 500,000 today. (Scientists count males at leks, or mating grounds, to extrapolate a rough population estimate; obtaining an exact count is impossible because the birds are essentially invisible in the vast sagebrush sea.) 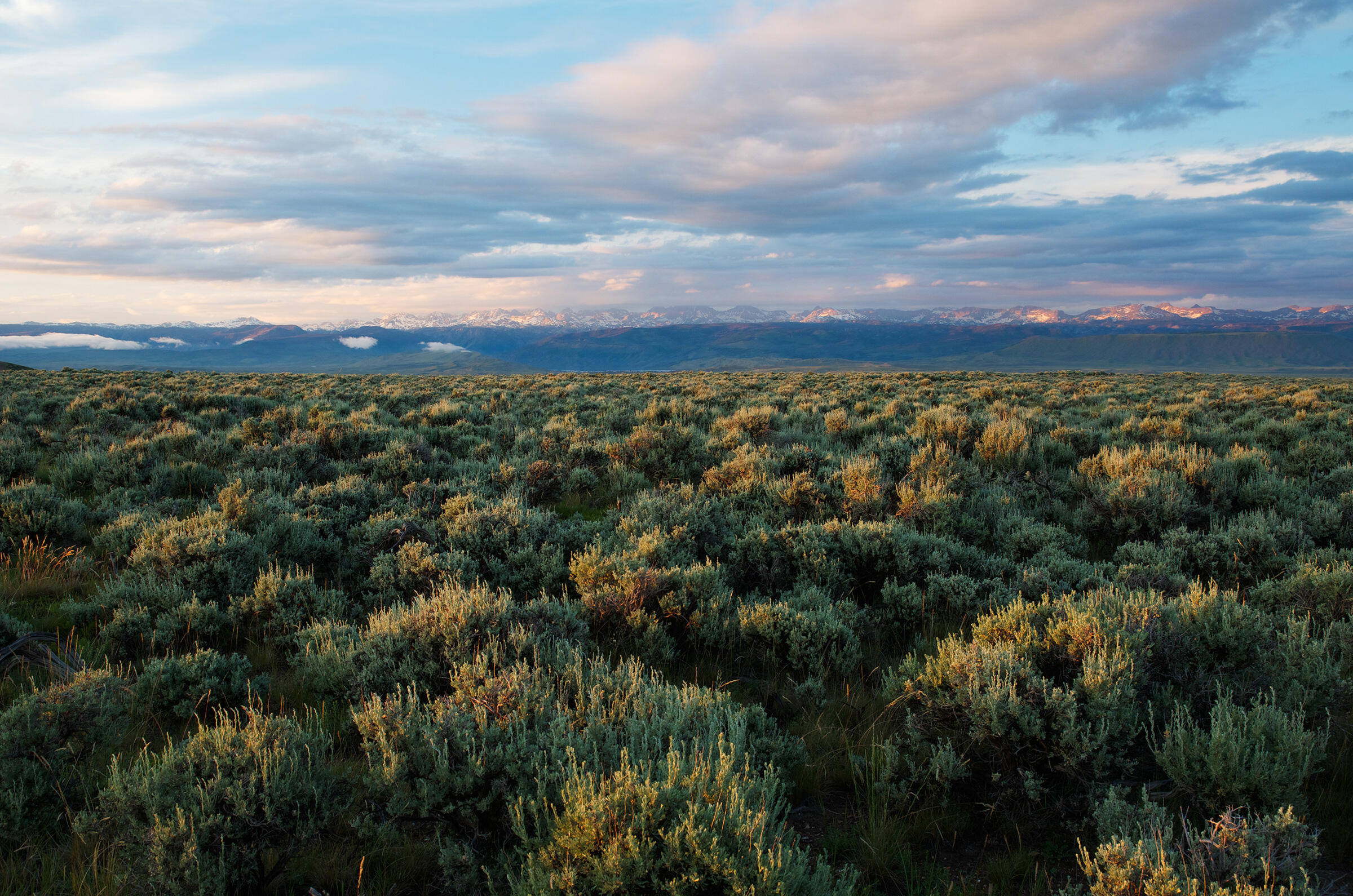 The Greater Sage-grouse is an indicator species of the health of this entire ecosystem. The desire to keep the bird off the list—and stave off the many restrictions that come with a threatened or endangered status—has generated a rare show of cooperation from those interested in using the habitat for drilling, ranching, or other economic endeavors. In consultation with conservation groups and government agencies, they have made ambitious commitments to protect enough space for the bird while still permitting some development. Today’s announcement is a ratification that the approach is working. “We’re seeing landscape-scale conservation like we’ve never seen before,” says Audubon’s Rutledge.

Related: A History of Audubon and the Greater Sage-grouse

See a timeline of Audubon's involvement in this critical conservation issue.

Rutledge helped create a Wyoming sage-grouse management plan that allows sage-grouse and industry to co-exist. The state is home to 37 percent of the sage-grouse population, and is also a major producer of coal, natural gas, and beef—all of which rely on the same sagebrush habitat. Under Wyoming’s plan, surface disturbance—from roads to wind turbines to gas wells—in areas critical to sage-grouse are limited to a maximum of 5 percent per square mile. Since Wyoming adopted the scheme in 2010, it has successfully protected 15 million acres of sagebrush habitat. Following this success, other states put similar plans in place, thus reducing threats to birds on tens of millions of acres while still allowing for development. 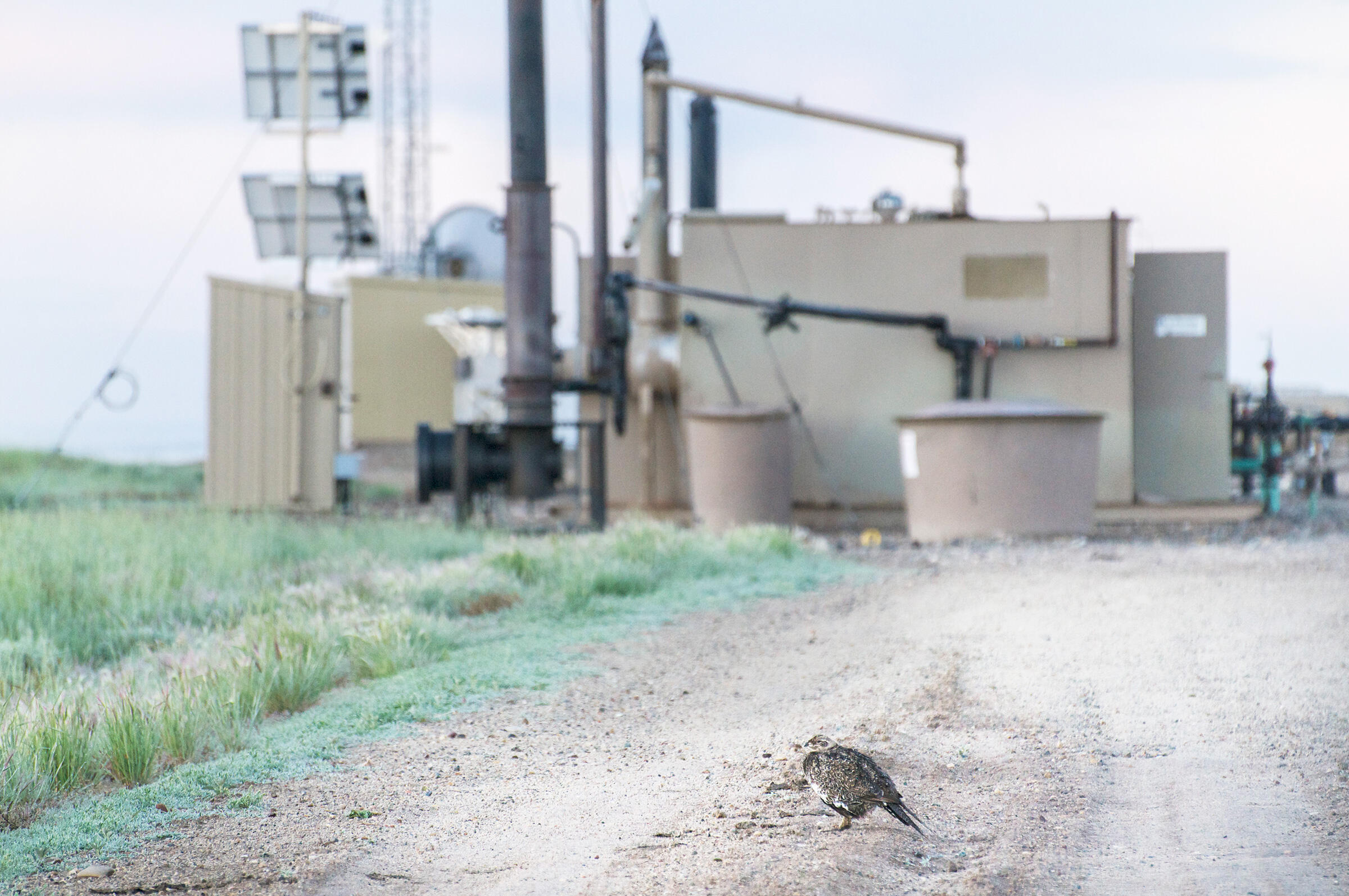 Private landowners have also stepped up to implement protections for the bird, in exchange for guarantees that they won’t be required to jump through additional hoops should the grouse ever be listed. Through the Sage Grouse Initiative (SGI), a voluntary program created by the USDA, by the end of 2014 more than 1,100 ranchers have restored or conserved 4.4 million acres on private lands in 11 states, many in the form of conservation easements, which preclude the land from being developed or converted. They’ve also altered their grazing systems, removed conifer and invasive cheatgrass that encroaches on sagebrush, reseeded former rangeland with native plants, and removed or marked lethal fencing (the bird’s sideways-pointing eyes are great for spotting predators, but make them blind to fences directly ahead).

This rancher involvement represents an enormous shift. For instance, the SGI reports that the amount of land set aside for Natural Resources Conservation Service-sponsored easements increased 1,809 percent since the partnership began. The Big Empty, as the sagebrush ecosystem has been called, is finally getting the attention, and economic support, that it deserves, says Rutledge. In August, the USDA announced that it would invest $211 million through 2018 in the program; to date, SGI and its partners have invested more than $420 million. Industry has gotten onboard in unexpected ways as well, altering their practices to better suit the bird. For example, since 2010, the state has seen a 60-percent reduction in conventional drilling, and a 1,600-percent increase in directional drilling, which allows companies to access deposits from the side, thus protecting sensitive lands directly above.

The majority of the bird’s habitat, 64 percent, is on federal lands, and the Bureau of Land Management controls most of those approximately 60 million acres. Earlier this year, the BLM and U.S. Forest Service released management plans for public lands in 10 states. The plans, developed over the past three years with the states and with input from local stakeholders, including ranchers, conservationists, and industry representatives, place restrictions on 35 million acres of priority bird habitat to prevent degradation. Even though the plans weren’t formalized until today, the drafts were taken into consideration, says Pat Deibert, national sage-grouse coordinator for the FWS, who was responsible for crafting the sprawling species report—chock full of information on the major threats facing the bird and efforts to combat them—that drove the listing decision. 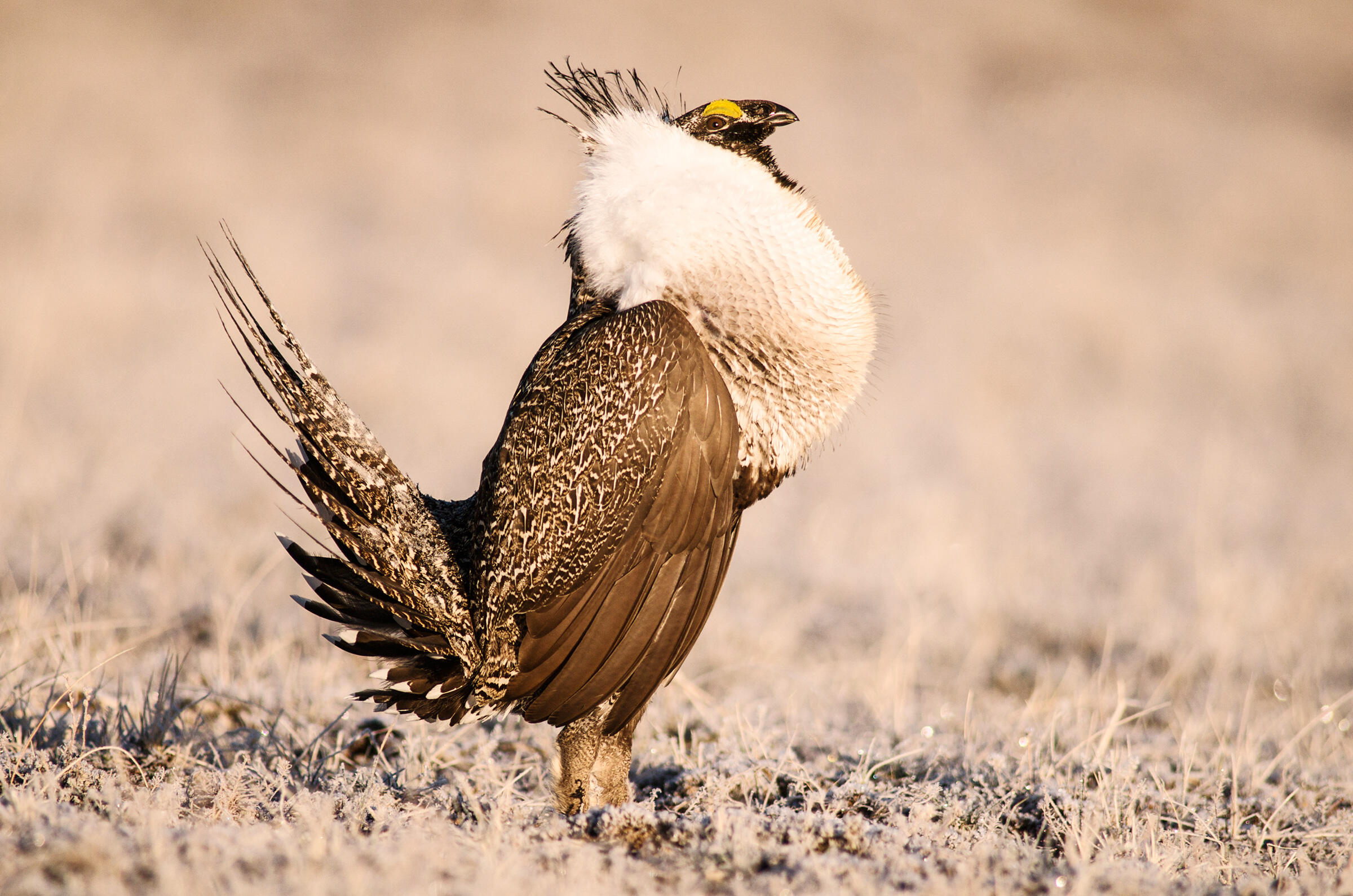 A Greater Sage-grouse male displays for the attention of females on a frosty lek. Pinedale, Wyoming. Photo: Dave Showalter

“There’s been a lot of criticism of the plans—some say they didn’t go far enough, others say they went too far,” says Deibert. Some environmental groups, including Western Watershed, have threatened to sue if the bird is not listed, because they believe the federal plans allow too much development and don’t go far enough to protect sagebrush habitat.

However, recent research suggests that coexistence between the bird and the boom is possible; for example, a report from the Western Values Project demonstrates that sage-grouse habitat overlaps with just 2 percent of prime drilling area.

Rutledge says the plans will evolve and improve as sagebrush conservation continues—and conservation must continue, because as Rutledge points out, there’s still a long way to go before the ecosystem is restored.

The Future of the Sagebrush Sea

Deibert says that her office will closely monitor the implementation of the newly approved state plans, as well as continue to track other on-the-ground activities. FWS will also continue to enroll private landowners in sage-grouse conservation agreements. She also says there’s talk of establishing one or more new offices devoted to sagebrush ecosystem management. “We have to keep this momentum going, to make sure we don’t slip back into our old ways,” Deibert says. “That wouldn’t help anybody. Not industry, not ranchers—certainly not the bird or the ecosystem.”

Rutledge says that in addition to continuing the restoration efforts underway, new research will likely be needed to solve major challenges—like how to grow sagebrush. For such a hardy, long-lived shrub, it’s proven tricky to replenish from seed. “This is the beginning of the sagebrush conservation work, not the end,” he says. “We’ve decided how to limit further disturbance, and agreed that we’re not going to keep hammering the crap out of the landscape. But it can’t recover on its own.” 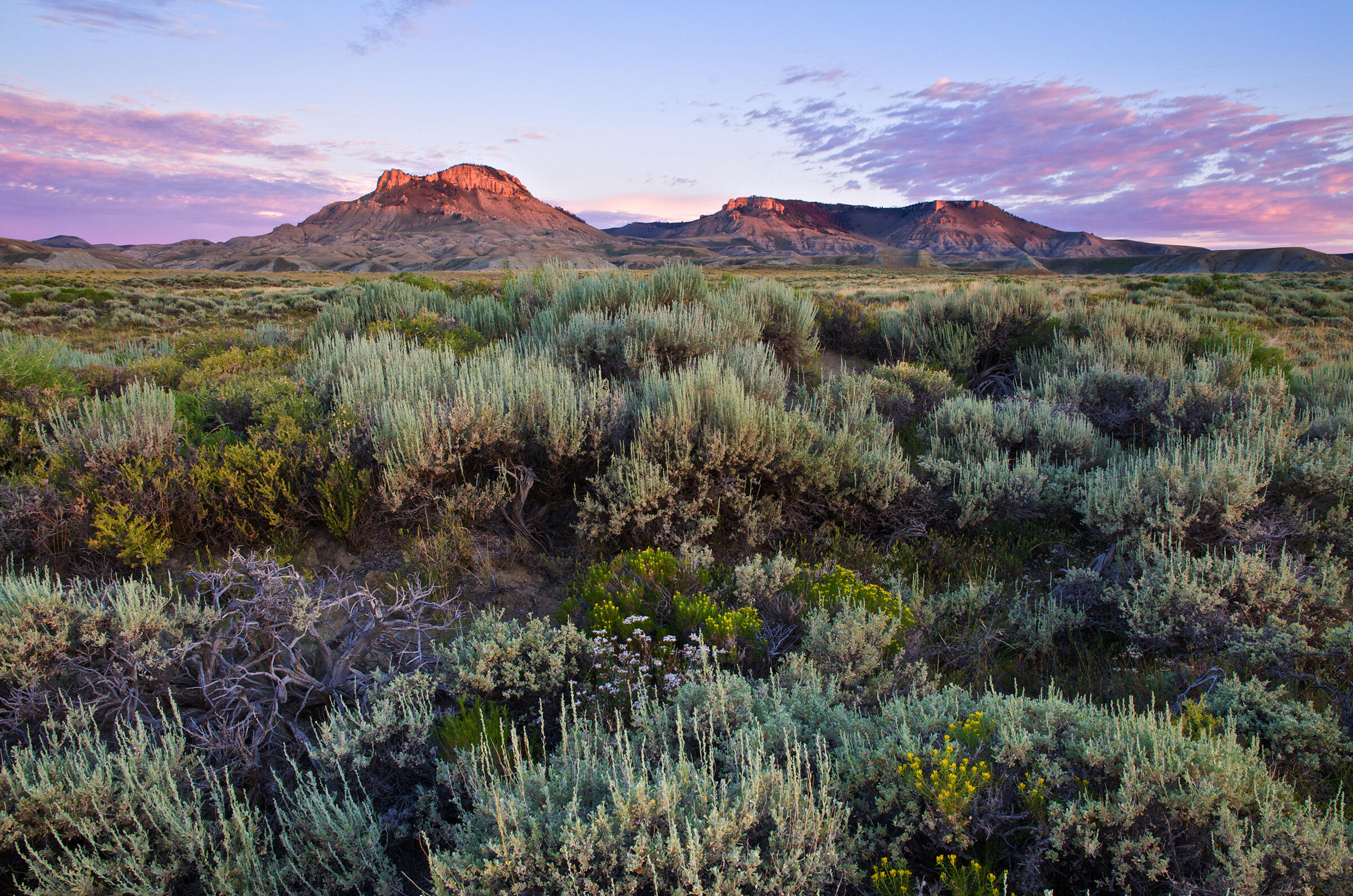 Sunrise lights the buttes of the Red Desert. This area is typical of the sagebrush ecosystem and important for many endemic species. Oregon Buttes Wilderness Study Area, Wyoming. Photo: Dave Showalter

The Greater Sage-grouse is an avatar of the sagebrush landscape, and today’s conservation victory isn’t about a single species. Core grouse habitat in Wyoming, for instance, was found to overlap with mule deer’s winter range, stopover areas, and migration corridors. And a recent study of sagebrush-dependent songbirds in Oregon discovered that removing invasive plants to help retain sage-grouse habitat had a positive impact on other birds—for example, Brewer’s Sparrow abundance grew by 55 percent and Green-tailed Towhee numbers increased by 81 percent.

Protecting the Greater Sage-grouse—this odd bird that demands attention with weird pops and whistles during mating season, and then melts into the sagebrush for the rest of the year—ultimately means protecting the some 350 species that call this vast swath of the American West home.