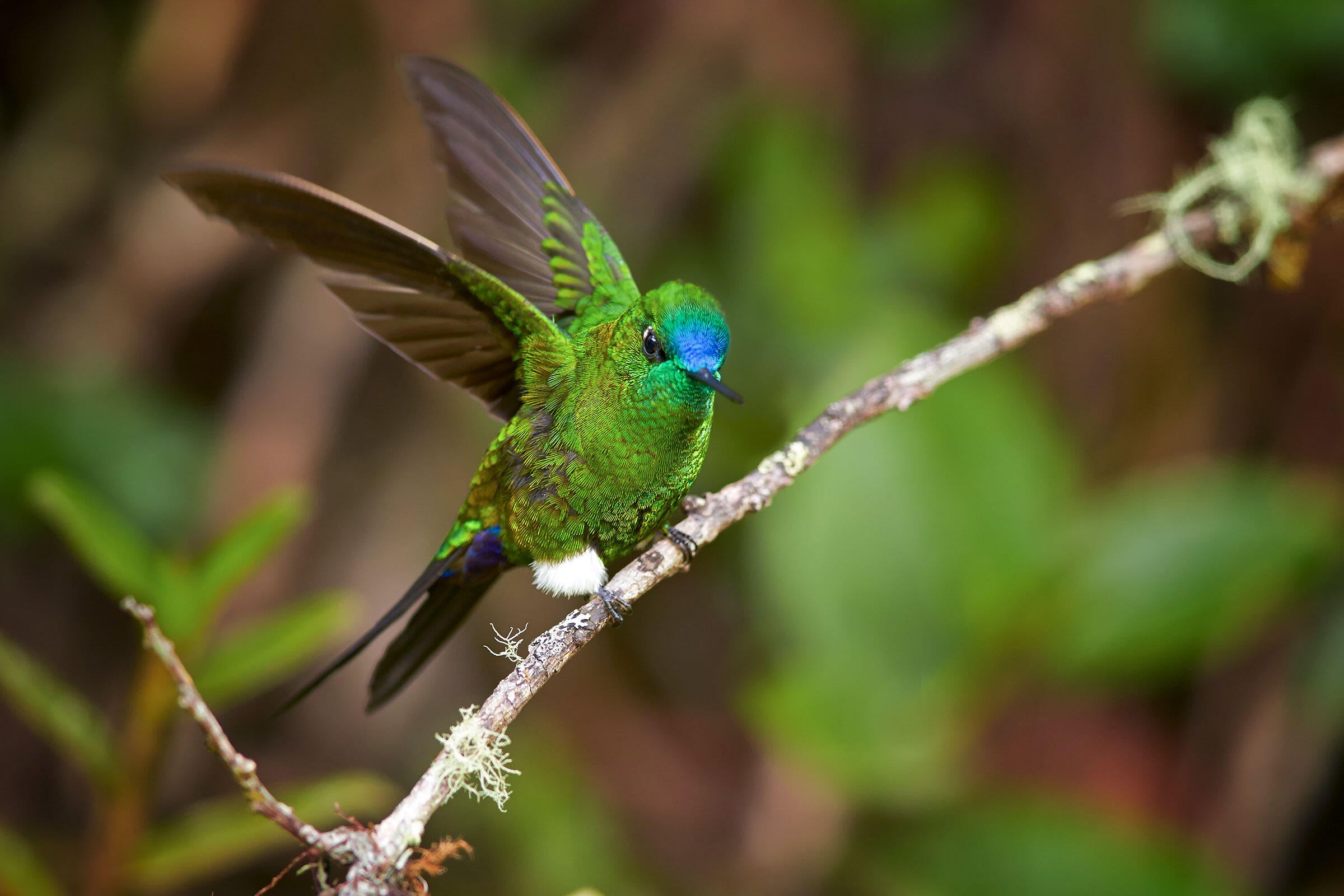 7 Hummingbirds That Wear Pants With Flair (Plus One Bonus)

Meet the "puffleg” birds of the Latin American tropics, covered in feathers all the way down.

Why do people wear pants? Warmth, decency, self preservation, and respect are all good reasons. But what use would a bird have in donning a pair?

That’s the mystery surrounding a group of tropical hummingbirds that, unlike most of their kind, are feathered from head to toe. With an extra layer of fluff around their tarsi (the bird word for legs), these 15 or so species come off as more glamorous than demure, flashing their Renaissance “pants” when they perch or ferociously attack flowers. The evolutionary purpose for their costuming is less clear, though.

While the trousered hummingbirds span two genuses (the closely related Eriocnemis and Haplophaedia, which combined are called the pufflegs), the feature seems to only pop up in species living around the Andes mountains. That would point to feathered thighs being a cold-weather adaptation—but as Audubon field editor Kenn Kaufman notes, there are species at even higher elevations that go commando. Instead, Kaufman thinks that the leg feathers may be purely decorative. “When you consider all the crests, tufts, fans, and elongated tail feathers worn by hummingbirds, not to mention all the iridescent colors, it seems reasonable to think that a conspicuous feather feature might have evolved for looks and not for any practical function,” he wrote in an email.

To further complicate the question, hummingbirds are not the only ones that have feathers as pants. The Yellow-thighed Finch (see at bottom) is a common example: Its eye-catching legs likely serve as a beacon for its kin. “In the dark, misty, subtropical forest in Costa Rica, pairs or family groups of Yellow-thighed Finches might be able to stay in contact with the visual signal of those bright feathers,” Kaufman wrote. Who said fashion is immaterial?

Let’s learn about some of these fancy-pants birds from Central and South America: 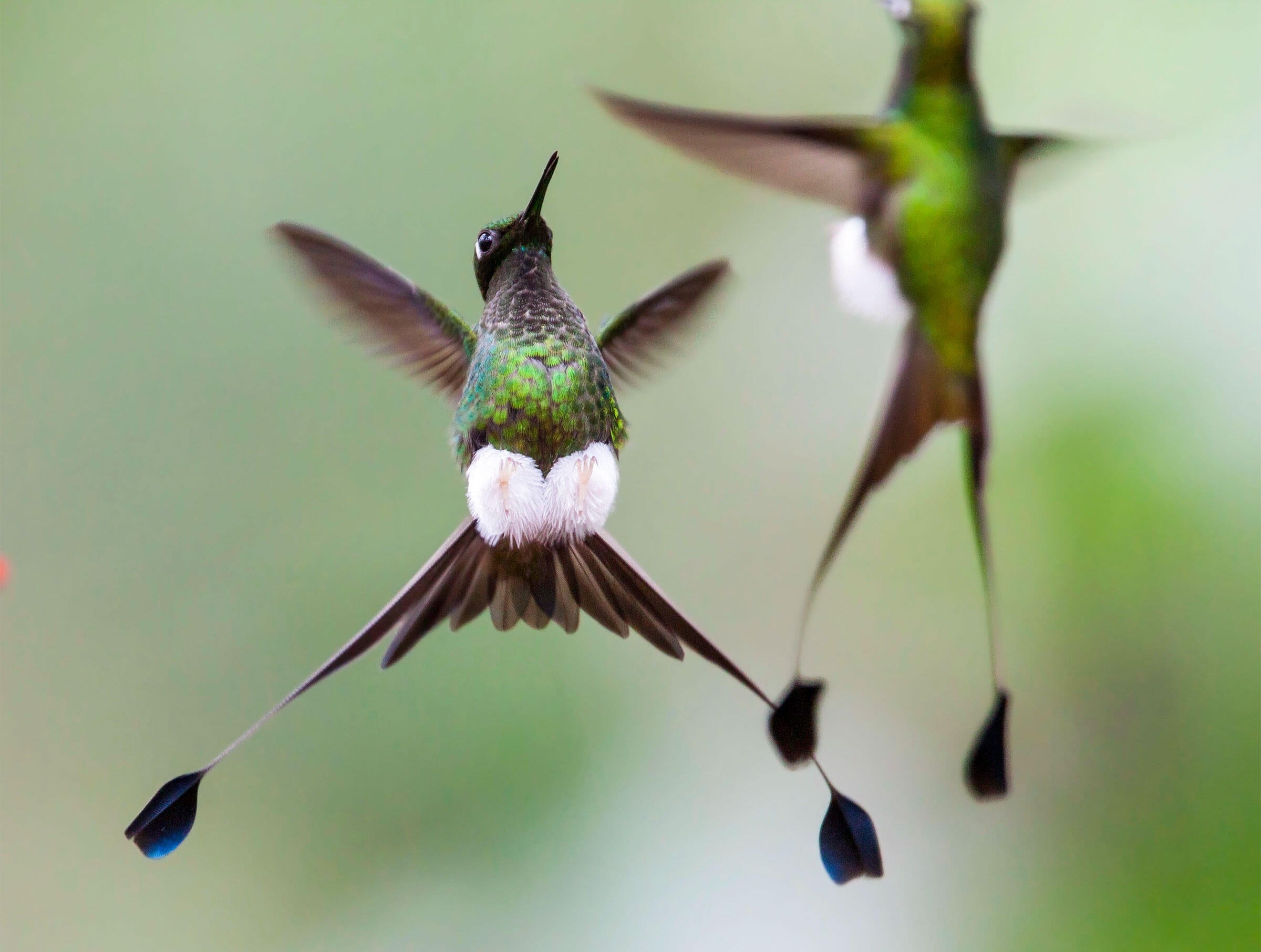 Where to see them: Venezuela to Bolivia

Chances are, you’ll be dazzled by this bird’s back end before even you spy the boots. Its extraordinary tail, tipped by two flat “rackets,” is almost twice the size of its body. Racket-tails aren’t migratory, but they do move up and down the mountain seasonally to find the best flowering plants. If food is abundant, females may raise several broods of chicks in a single year. 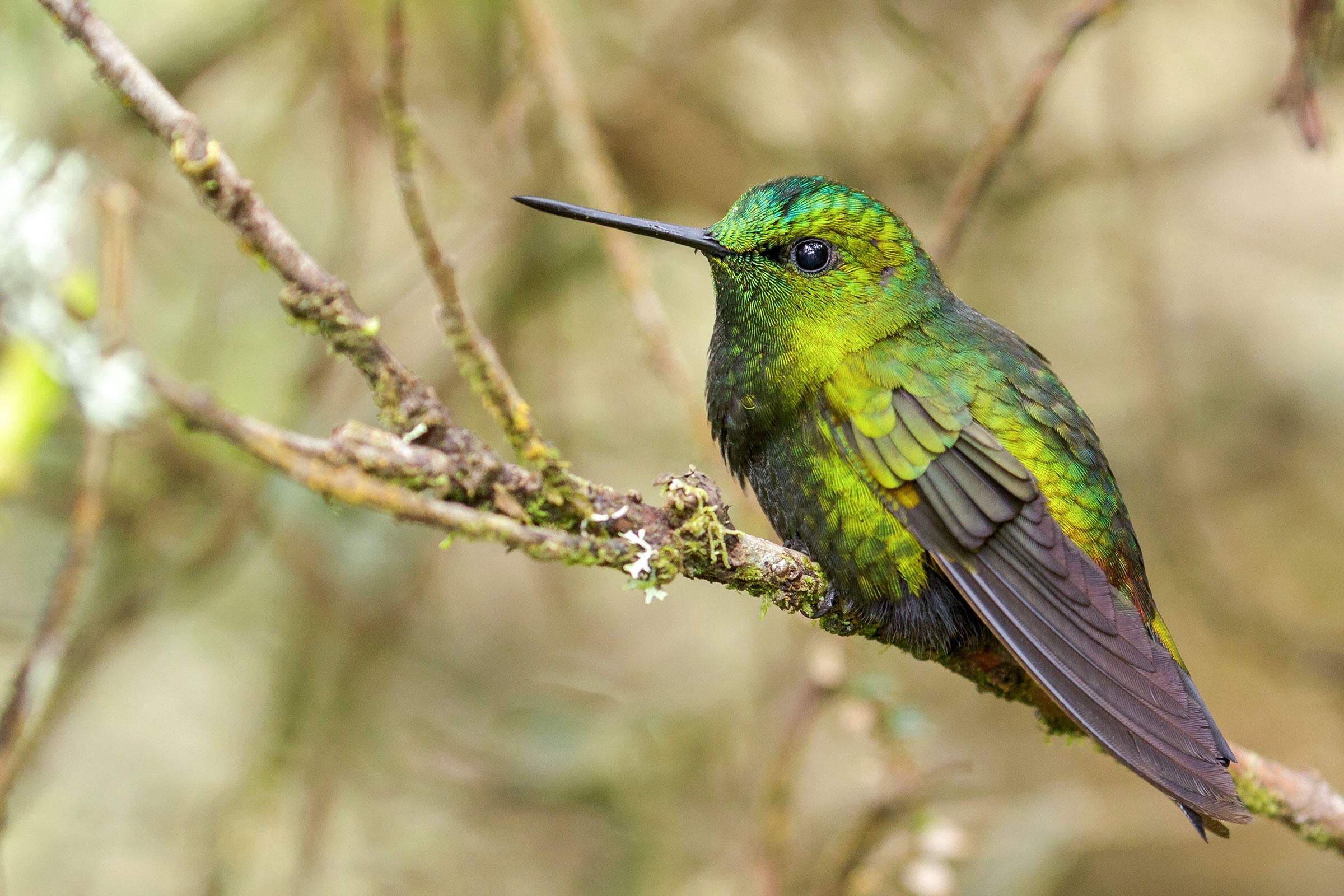 Where to see them: Colombia and Ecuador

Blink and you might just miss this bird’s calling card: Its subtle black leg feathers are sheathed by iridescent green scales and a matching midnight cape. While territorial, the species is extremely restricted in habitat, depending on pastures, ravines, and forest edges. But lucky for photographers, it also ravages nectar feeders.

Where to see them: Colombia, Ecuador, and Peru

At nine centimeters long and weighing one-tenth of an ounce, this species is the tiniest among the bite-size pufflegs. Yet, “its clean, white legs are perhaps disproportionately enormous,” states the Cornell Lab of Ornithology's description. The species covers a large range, making it less vulnerable to habitat fragmentation and other local disturbances. The bird, however, can be a challenge to find, given its love for lurking in the understory. 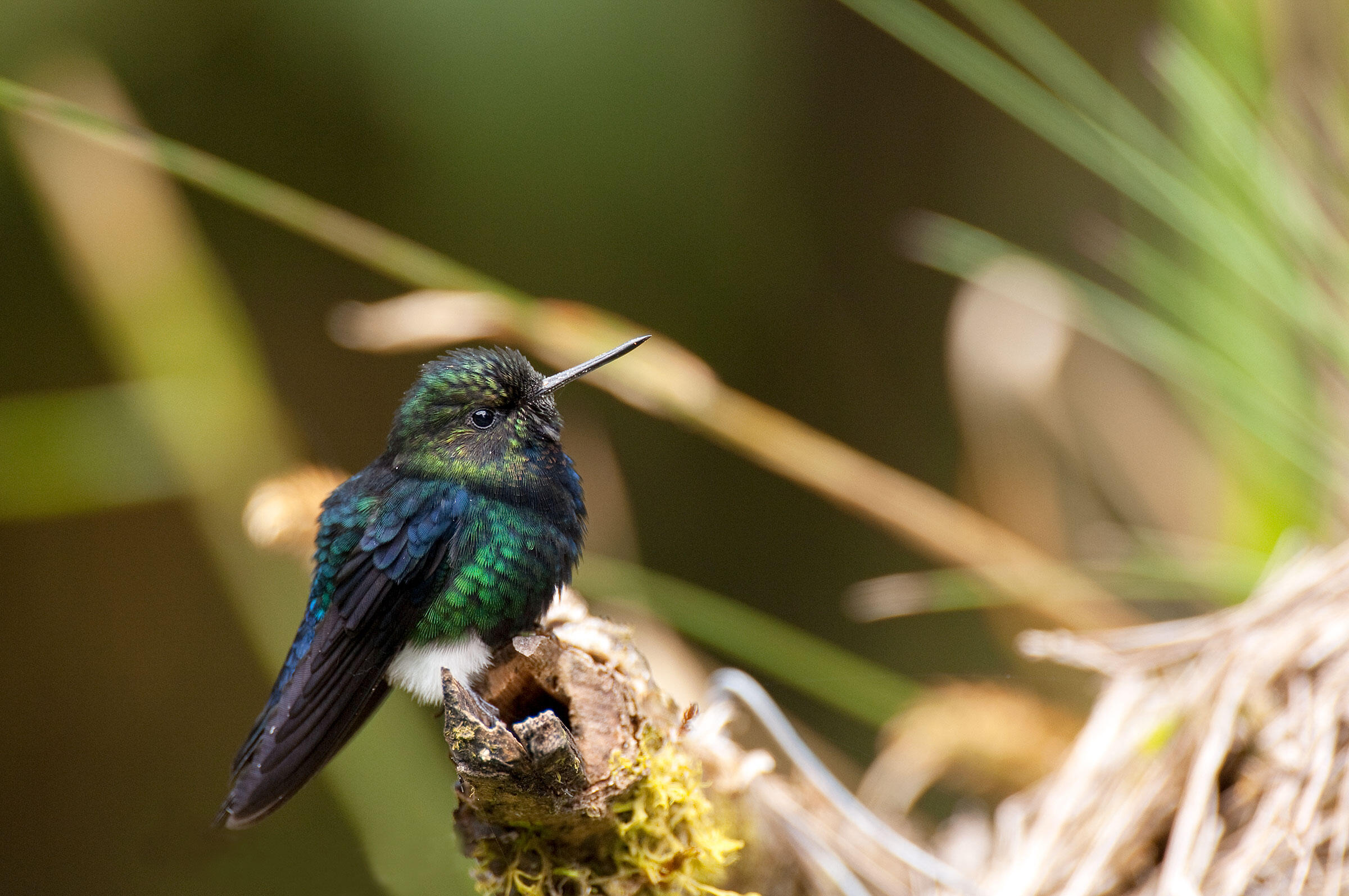 Where to see them: Ecuador

A dark horse with a murky future—this species can only be found in northwestern Ecuador, where it lives in bramble-filled elfin forests and the paramo. Both sexes flaunt pufflegs and jewel-toned gorgets, but males are much more somber overall. Deforestation and drier climates have taken a toll on the species. Now, time-lapse cameras are being used to understand how the birds forage so that any remaining habitat can be spruced up and reinforced. 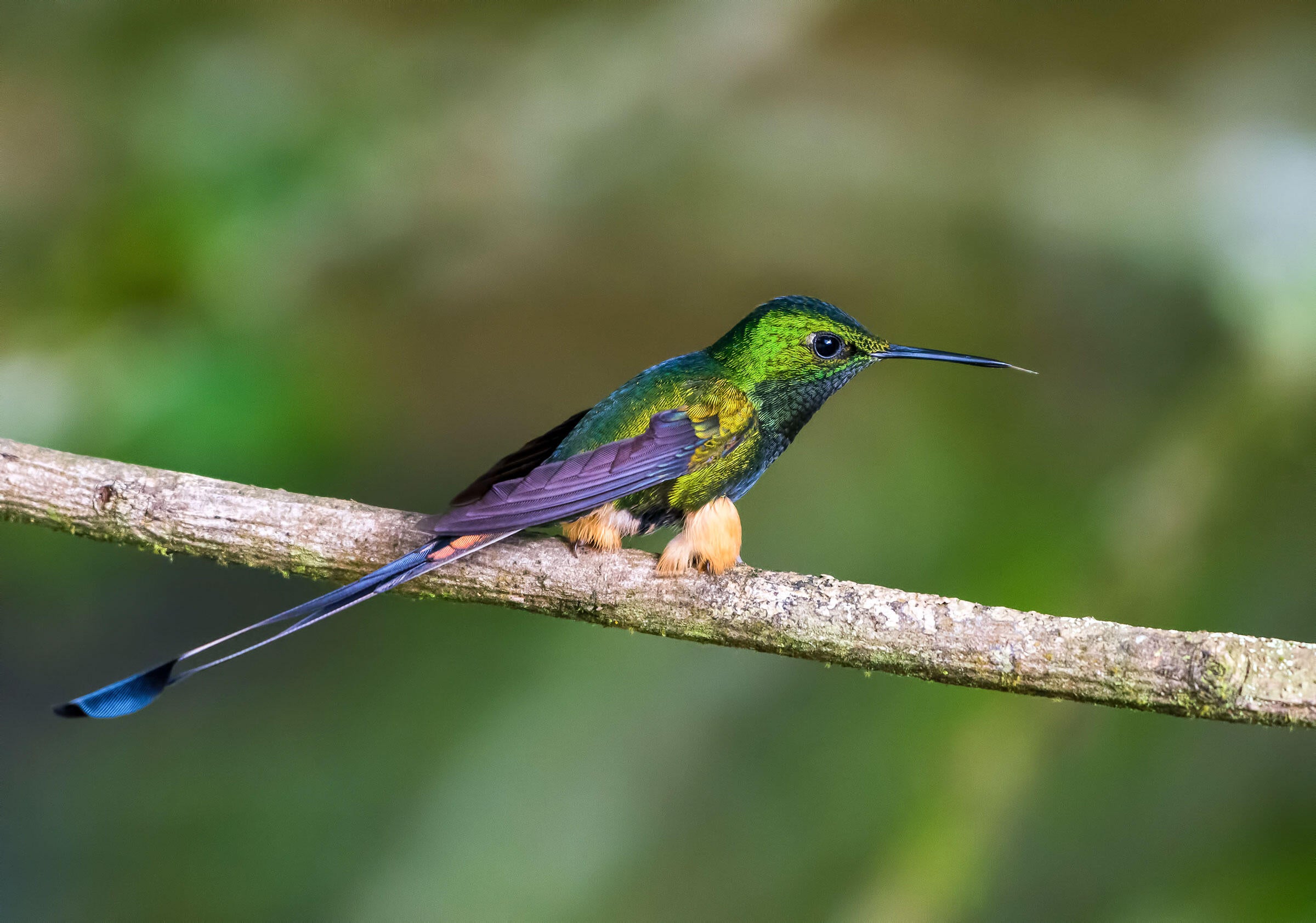 Where to see them: Peru and Bolivia

Some contest that the rufous Booted Racket-tail is a subspecies; others says it’s an entire species of its own. Either way, this cinnamon-legged sartorialist is a welcome sight in a sea of white fluff. Besides color, it can be distinguished from its white-booted counterpart by its shorter tail. But it’s equally as feisty and will chase everything from mates to tasty spiders to bumblebees.

Where to see them: Colombia, Ecuador, and Peru

Glowing or glowering? These pufflegs will go to great lengths to defend their drinking holes from nectar pilferers. A burst of purplish-blue offsets the black on their face, giving them the hue to live up to their name. The species is a tough one to spot: When it does dart into view, it never stays long. 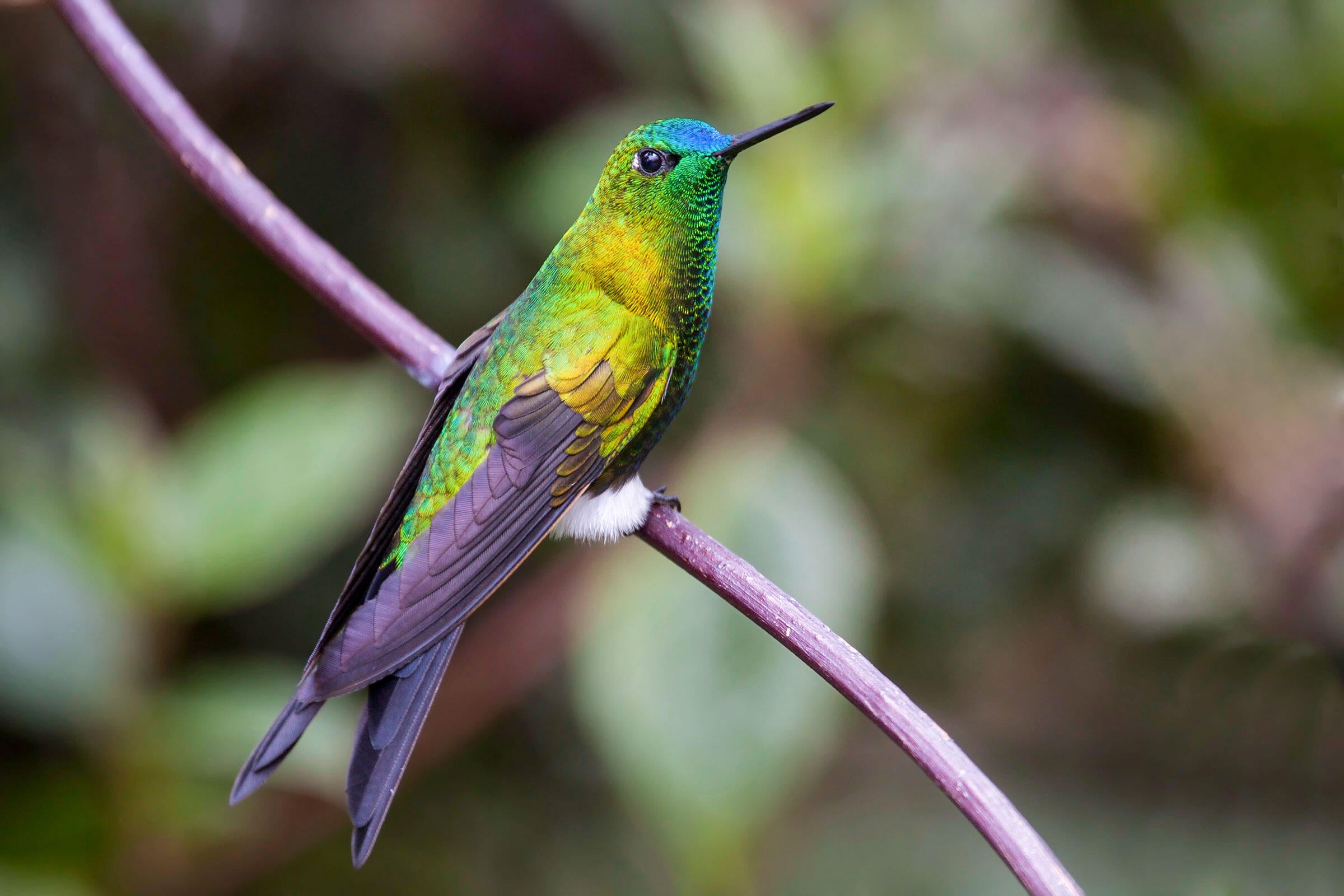 Where to see them: Peru, Ecuador, and a sliver of Colombia

Mysteries abound with these gems, which have a generous home range and a gorgeous smattering of marine-toned feathers. The species is specialized to the paramo, a misty, tundra-like landscape that studs the Andes foothills. Its persistent tune consists of a series of high-pitched chirrups–a silly contrast to its oh-so-serious pants. 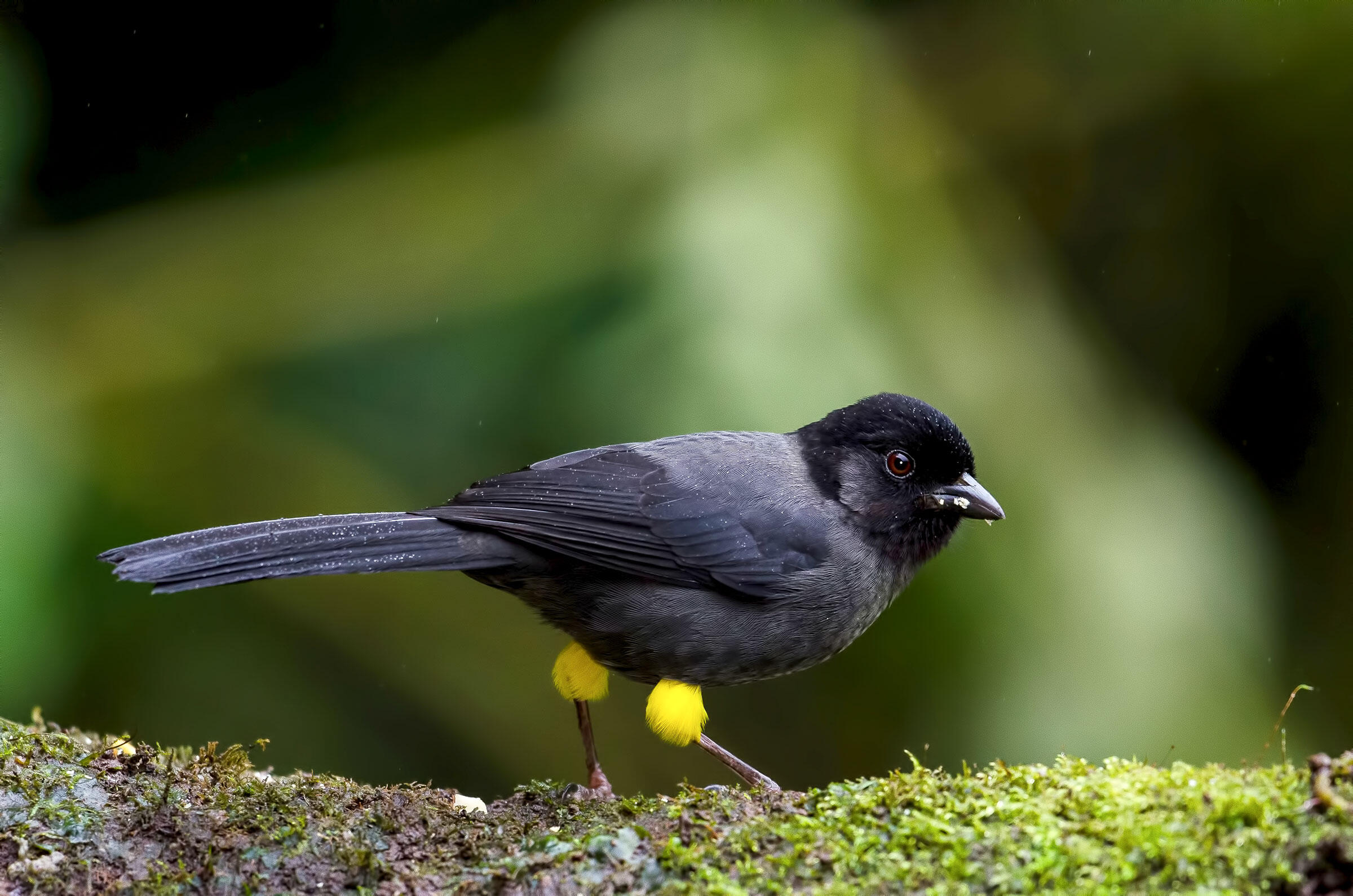 Where to see them: Costa Rica and Panama

Not to be outshone by the hummingbirds, this social passerine sings a spirited tune, often in synchronicity with its mate. One ornithologist described its pants as “lemon-colored puffballs sprouting from its belly.” The birds’ thigh tufts turn yellow as they mature, but their bold personalities and flicking tails distinguish them at every stage.