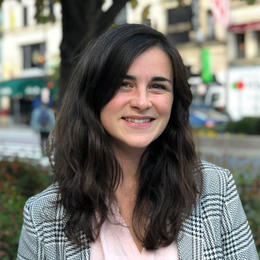 Today, while we are seeing the devastating effects of Isaias, we are also celebrating a victory for Atlantic seabirds. A small forage fish called Atlantic menhaden, which serve as a major food source for many seabirds on the East Coast, has been properly recognized as the foundation of the ocean ecosystem. The Atlantic States Marine Fisheries Commission voted unanimously today to adopt a new approach, known as ecological reference points, to ensure the menhaden population never drops below levels that would put birds and other wildlife at risk. Managing fish this way would mean more menhaden and healthier marine life from Maine to Florida, while allowing commercial fishing to continue.

Often called “the most important fish in the sea,” Atlantic menhaden are in the herring family and are critical to the health of estuary ecosystems along the Atlantic Seaboard. Menhaden play a key role in the marine food web, especially for many coastal and marine birds including Brown Pelicans, Bald Eagles, Ospreys, Northern Gannets, Common Loons, terns and gulls, as well as whales, dolphins, and larger fish.

Menhaden have made a major comeback over the years thanks to improved management. In 2010, after decades of population decline and unregulated commercial fishing, menhaden populations hit a 54-year low. In response, the Commission initiated active management of Atlantic menhaden for the first time and set protections in 2012 to reduce its catch. Because of this action, Atlantic menhaden population levels started to rebound. Whales were even spotted off of the coast of New York for the first time in decades, feeding on the newly abundant menhaden.

In 2017, to continue this progress, the Commission committed to managing this fish for the important role they play in the ecosystem, once sufficient science was completed on the relationship of menhaden with its predators. Now, three years later, after scientists have gained a better understanding of this relationship and developed these ecological reference points, the Commission has voted to adopt this new management style.

The deadly effects of the Isaias storm are a reminder of how important this work is for both people and birds that face multiple dangers on our coasts. Climate change threatens the availability of fish like menhaden, driving up the ocean’s temperature and sending forage fish deeper and further offshore to find colder water. At the same time, sea-level rise and stronger, more frequent storms threaten to wash away coastal communities and nesting birds alike. By reducing our impact on the fish that seabirds rely on, we are giving seabirds a fighting chance against climate change.

This decision blazes a new trail in fisheries management, one that other fishery councils and commissions across the country should follow. We sincerely thank the Commission for this important vote, which furthers the progress that has been made to ensure healthy ecosystems along the Atlantic Coast.