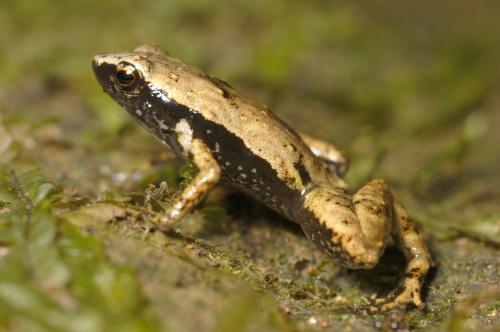 Ears come in all shapes and sizes, from elephant’s enormous floppy flaps to birds’ simple feather-covered holes. But some animals, like the Gardiner’s Seychelle frog, don’t have any visible ears at all. What’s more, the tiny, blueberry-sized amphibian is missing a middle ear—an internal structure critical for transmitting sounds. So, scientists have long assumed the wee hopper was deaf. Turns out, it isn’t—it hears, but with its mouth.

Most frogs hear with tympanums—the flat oval shapes on the side of their head—that connect to the middle ear. A few lack these structures but still are known to call back and forth. Researchers wanted to see if, like the latter, Gardiner’s Seychelle frogs communicate with sound.

They set up speakers in the rainforests of the Seychelles Islands where the tiny amphibian lives. When they played pre-recorded croaks, Gardiner’s Seychelles frogs called back.

Once they established that the frogs can hear, they set out to figure out how they do it. They used x-rays to build three-dimensional simulations, and found that sound wasn’t transmitted via the lungs or through the muscular system, the researchers report in a study published this week in the Proceedings of the National Academy of Sciences. Ultrasounds and simulations revealed that the lung was smaller than the oral cavity and lacked the same sound frequency of the species’ croak, while the muscular system was not developed enough to support hearing abilities.

Next, they turned to the mouth. Their simulation showed that it amplified sound and transmitted it to the inner ear thanks to an evolutionary adaptation: thinner tissue, and fewer layers of it, between the mouth and inner ear. "The combination of a mouth cavity and bone conduction allows Gardiner's frogs to perceive sound effectively without use of a tympanic middle ear,” said lead researcher Renaud Boistel from the University of Poitiers and the French National Centre for Scientific Research in a press release.

The frog’s long existence in isolation may account for its unique approach to hearing. "These small animals, Gardiner's frogs, have been living isolated in the rainforest of the Seychelles for 47 to 65 million years, since these islands split away from the main continent,” says Boistel in the press release. “If they can hear, their auditory system must be a survivor of life forms on the ancient supercontinent Gondwana."

While using your mouth to hear might seem strange, the Chinese soft-shell turtle takes the prize for oddest use of the structure: It urinates through its mouth.