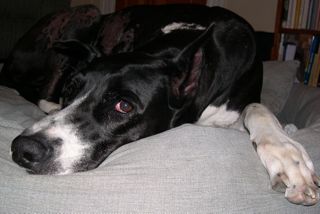 When I wrote "Dying to Be Green" for the Sept/Oct issue of Audubon Magazine, I focused on people and the impact of our current funeral and burial customs on the environment. It's considerable, and not particularly green--although that's changing, as the article shows. But what about our pets? Do they "go green" into that Great Beyond?

Not necessarily. With an estimated 77 million pet dogs in the United States and 94 million pet cats, according to statistics from the Humane Society of the United States, that's a serious issue. Although on the plus side most people don't embalm their pets with carcinogenic substances, nor are pets generally buried in resource-consumptive concrete vaults and caskets lined in soil- and ground-water-polluting lead. It's generally legal to bury your pet on your own property, given public-health considerations. (I confess that I've got two dogs buried in my yard, a Shar Pei and a Great Dane, one in a biodegradable shroud, ie, an old cotton towel, the other as what the burial industry euphemistically calls "cremains.")

Those who prefer to bury their pet in a cemetery may want to look for a green or conservation burying ground, and if an actual casket is in order, look for something more... well, natural than the plastic or imported tropical hardwoods on offer at most pet cemeteries.

Note also that pet cemeteries, unlike cemeteries for humans, aren't required to be protected "in perpetuity," meaning that your pet's final resting place could be sold for a shopping mall someday, depending on state and local laws.

As far as I can tell, there's no national green burial movement for pets yet, but here are two possible resources: The Green Pet-Burial Society and Nature's Way Home.