One species that modern birders can never add to their life lists is the imperial woodpecker, but now, a rediscovered 85-second film clip offers a unique opportunity to see this vanished species in action. 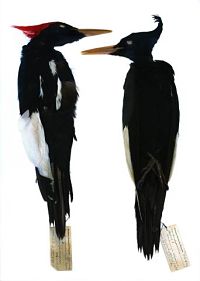 Raven-sized Campephilus imperialis was once the world’s largest woodpecker, dwarfing the closely related ivory-billed woodpecker. A resident of Mexico’s Sierra Madre Occidental, the imperial woodpecker lived in high-elevation, old-growth forests, where it found plenty of large, dead pines for excavating nest cavities and foraging for beetle larvae. Early in the 20th century, these aristocratic-looking birds often could be found in groups of five to ten. By the 1960s, not even locals saw them any more. Intensive commercial logging and, to a lesser extent, hunting, had taken an irreversible toll.

In 1956, Pennsylvania dentist and amateur ornithologist William L. Rhein caught the last officially recognized glimpse of a living imperial woodpecker. He documented the occasion on 16-mm color motion-picture film, but he kept that souvenir to himself, dismissing it as “very poor footage.” If not for the efforts of Cornell Lab of Ornithology scientist and Campephilus super-fan Martjan Lammertink, those flickering images might have remained lost forever.

Rhein’s movie may be a bit shaky – after all, he shot it with a handheld camera while riding a mule – but except for 160 mounted specimens and study skins, it’s all we have left of this magnificent bird. Lammertink and his colleagues have spent the past few years analyzing each of the film’s 2,041 frames. This month they shared their findings in the pages of The Auk. Better yet, they made the film footage publically available for the first time.

One image-stabilized excerpt captures Rhein’s subject hitching up a tree trunk. Another zooms in to show bark chips flying as she hunts for hidden prey. But, unsteady or not, the unedited version is the most mesmerizing.

I found myself holding my breath as I watched the bird, one of the last of her kind, go about her business. Her forward-curved crest bobs about as she pecks and hops. Then she launches from a treetop with deep, powerful wing strokes and flies out of sight. I can, and will, play that scene over and over, but nothing can ever bring the imperial woodpecker back to life.