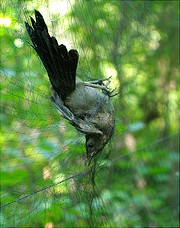 A catbird caught in a mist net / photo by byard via Flickr
It’s a beautiful day and you’re a bird flying through the forest, chirping away, when suddenly—BAM! You smack headfirst into a massive net. The more you struggle, the more entangled your bony little feet and vainly struggling wings become. Congratulations, you’ve just landed in a scientist’s mist net.

Avid birders and ornithologists are familiar with mist nets. For the rest of us, they’re volleyball-like nets made of nylon mesh designed to capture flying animals, like birds or bats. An entangled bird must be promptly removed by experienced personnel for the animal’s safety. Birds are then weighed, observed, and occasionally banded. While it looks hazardous—and quite uncomfortable—for the birds, mist netting is an important tool for studying bird behavior and populations, and the technique is assumed to be safe for wildlife.

The key word, though, is ‘assumed.’ With over one million birds banded each year, serious need existed for a comprehensive study evaluating the risks associated with mist netting. Erica Spotswood, a PhD candidate at the University of California at Berkeley, filled this gap. Spotswood and her team compiled twenty years of bird injury and mortality records sourced from 22 bird banding organizations. The data included more than 340,000 captured birds of 188 species in the U.S.

It seems that mist netting is safe after all, according to the results Spotswood published in the journal Methods in Ecology and Evolution. Methods with a mortality rate above one percent are considered excessive, according to the Handbook of Field Methods for Monitoring Landbirds. Spotswood found that the average rate of injury was 0.59 percent while mortality was only 0.23 percent. Mist netting, an invaluable tool for ornithologists, is safe enough for continued use.