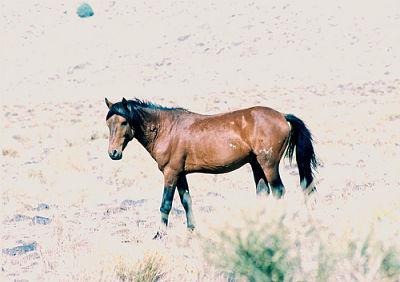 A wild horse in Nevada (By Hassell Painter/CC BY-NC-ND 2.0)

The Bureau of Land Management (BLM) has been selling wild horses to a dealer suspected of reselling them to slaughterhouses, according to a recent Propublica investigative report. It’s causing a stir among wild horse advocacy groups in the West.

The agency is tasked with rounding up horses and finding them good homes, but in the face of high hay prices and falling demand for horse adoption, at least 1,700 horses since 2009 have been sold to a single, allegedly unsavory buyer named Tom Davis.

Buyers sign a document promising that the horses will not be slaughtered. Tom Davis, a livestock hauler from Colorado, has never admitted to selling his horses to slaughterhouses, but Propublica reports suspicious actions: He’s moved horses illegally across state lines. Many of his explanations for where horses went do not check out, and a sizeable number are recorded as having been sent to towns near a border crossing point for horses being sent to Mexican slaughterhouses.

Davis is a vocal proponent of slaughtering wild horses: He told Propublica, “Hell, some of the finest meat you will ever eat is a fat yearling colt. What is wrong with taking all those BLM horses they got all fat and shiny and setting up a kill plant?”

In the wake of the article advocacy groups, such as the Cloud Foundation and Wild Horse Education, have condemned the practice of rounding up the horses at all and called for a full investigation of Davis. On October 1, the BLM began a new roundup that will continue through February.

Proponents of limiting wild horse populations, meanwhile, say that roundups are common sense: Horses destroy the range, trampling the earth with their hard hooves, gobbling up the available nutrients, and making life more difficult for other species, such as sage grouse and pronghorn antelope (see “Saddle Sores” by Audubon’s Incite columnist Ted Williams).

And Tom Davis’s position, that it makes sense to slaughter extra horses, is not such fringe view. In November 2011, Congress lifted its ban on funding to the FDA for horsemeat inspections. Proposals for slaughterhouses have been made in several states.

A controversial new effort aims to protect the Wild West.

To Americans, the image of mustangs pounding across the range is a potent symbol of the Wild West. But it’s a myth that harms wildlife and wreaks ecological havoc.