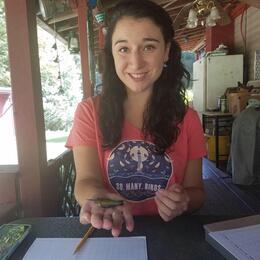 In April, we asked some of our most loyal members (who had opted to participate in our Donor Insight Panel survey) to tell us more about their "birding lifestyle". We learned about the feeders in their backyards, whether or not they travel to see birds, and how many of our members take bird photographs. Sixteen percent of survey respondents describe bird photography as a serious hobby and 63% of respondents shared that they occasionally take bird pictures.

The majority of our Donor Insight Panel members photograph birds in their backyards or on their balconies and in local parks, preserves or natural areas near their homes.

We asked these shutterbugs to share a bird photo that they are especially proud of. We also wanted to know the story behind the shot. Over 100 members shared their best photos and stories with us.

Here are 18 of our favorite stories "Behind the Shot":

"It's hard to pick just one photo. But I particularly like one of a Juniper Titmouse. We have a pair of Juniper Titmice who visit our yard from time to time. We've tried to make our yard a sanctuary for local, declining bird species — including the Juniper Titmouse and Piñon Jay, both of which depend on the Piñon — Juniper woodland, in which we live. We feel fortunate to have both species living nearby and hope our efforts are having an impact." — John D., Santa Fe, New Mexico

"It's a photo of a simple Song Sparrow. I watched this bird for an hour or more in Magee Marsh. It was collecting food for its nestlings. It kept dropping down, and each time, it came up with more and more food in its mouth. I was captivated. Obviously, I called the photo 'Fixing Lunch for the Kids.'" — Sue K., Columbus, Ohio

"A photo of a Marsh Wren. We were driving down a back road in California at 10 mph, using the car as a mobile blind. The marsh wren popped up right beside me (I was driving), I grabbed my camera, squeezed off two shots, and it was gone. But the image was forever impressed in my brain." — Michael L., Chicago, Illinois

"This was a photo of an Anna's Hummingbird that had been picking up cattail tufts (for the nest, apparently). The photo was taken in the backyard of a place my family was renting at the time, in a residential area of Oakland, CA, on Feb 25, 2010. One time I noticed that hummingbirds were very active near a small stream running through the property but nothing was flowering there. I was surprised to find out that they were picking up the tufts. However, taking the photo took a long effort and many failed attempts, as the birds are small and cautious and cattail leaves get in the way of lens' focus easily. I only got 3-4 decent shots out of many failed attempts but was very happy to capture these moments nevertheless." — Iryna D., Oakland, California

"This winter while in Yellowstone National Park I was able to photograph a Common Raven on a snow bank. Ravens are one of my favorites and this bird just posed for quite awhile for me. I felt very honored." — Gary C., Farmington, Utah

"I can't choose a specific photo! A sassy Anhinga, a put-upon Osprey, a chill gull — the best thing about a bird photo is the fun behaviors you can capture and the anthropomorphic attitudes you can project on them. If I have to choose one at random, here's a pensive heron gazing out at the beautiful waters of Cape Florida." — Domenica D., Plantation, Florida

"I have some brilliant close shots of an Eastern Bluebird. I set up my camera on a tripod inside a large picture window about three feet from a nesting pair's box and snapped a lot of frames. I have another of a red-tailed hawk as he is jumping into the air to take off from a field. It's more dramatic because it is frozen activity, not simply a perched bird." — Scott O., Sharon Springs, New York

"I was on a photography expedition in Utah with some fellow photographers. It happened that one of the days of the tour was my birthday. I mentioned that it was my birthday at breakfast and was asked what I would like to see as a present. I said I would like to see a puma. My friends said that would never happen, but, remarkably, we did see one and got some great photos. Anyway, they asked what else I would like to see, and I said I would like to see a Merlin. Again, my friends said that it was unlikely we would see one and that if we did, it would be far away. Suffice it to say that as we drove around looking specifically for raptors to photograph, we came around a bend in the road, and there was a Merlin perched on fence post along the side of the road calmly eating a bird that it had caught. What an exciting sight! Fortunately, the Merlin posed nicely for some photos. So two once in a lifetime experiences in one day and on my birthday to boot!" — Corey R., San Francisco, California

"In 2011, we came upon a Wood Thrush in the wilderness surrounding Pico Bonito Lodge in Honduras. The lives of these incredible winged wonders suddenly unfolded as reality. I knew many passerines were long-distance flyers, but somehow the dots didn't quite connect that the thrush I had seen in Pennsylvania a few months ago might well be this very individual. A love affair affirmed." — Kathleen R., Gasparilla Island, Florida

"Late last summer, I purchased a Nikon P900 (used) from a reputable dealer. The very first evening I had the camera, there was a very cooperative Carolina Wren in the backyard but what surprised me was that the bird appeared to be napping on his perch. I've never seen a Carolina Wren slow down....ever!" — Mary D., Saint Louis, Missouri

"I was watching a Heron rookery. The male birds were dropping to the ground to pick up sticks to give to the female birds on the nests. Suddenly one male flies to our side of the road into a tree. He then rips off a branch with his beak and flies back to a nest. I didn't realize they had that much strength as it is not easy to tear a branch from a live tree. Needless to say the female heron was as impressed as we were." — Lisa L., Cleveland, Ohio

"While birding through Audubon Newhall Park in Hilton Head last Christmas this Pileated Woodpecker flew right in front of us and stayed ten minutes flying from tree-to-tree drumming. The lighting and her position afforded us a great opportunity to take some amazing photos of this beautiful bird." — Scott S., Mount Pleasant, South Carolina

"A recent favorite was my lifer Northern Hawk Owl in the Sax-Zim Bog of Minnesota. Making all the more enjoyable was the temperature sank to -56 Fahrenheit that morning, and had not warmed appreciably by the time we found the owl." — Kurt S., Ellicott City, Maryland

"I started photographing birds during spring migration when there would be something I wasn't able to ID in the field . . . later it became about remembering what it felt like on a given day. The Carolina Wren photo that I attached here was at a local community garden a month or so after harvest, in mid-October. The colors behind it captured that mid-Autumn feel, and the post it was on is really typical for what you see in this spot. I can remember exactly where I was in the garden, and how I spotted the bird, and where it went after. That happens a lot actually when I look back at photos; even ones from years and years ago. It's like experiencing the sighting all over again." — Matt S., Brighton, Massachusetts

"On a gray August day at the Middlefork Savanna in Illinois, I took a photo of an Indigo Bunting, thinking the overall gloomy light would ruin the shot. On the contrary, the absence of blinding light made the spectrum of blues and indigos pop out, and the white/gray background gave the photo a contemporary, minimalist feel." — Tamima I., Evanston, Illinois

"It is so hard to choose, as I 'shoot' birds a lot, and there is always a story. The one I chose for this survey is a shot of two Northern Gannets (doing nothing spectacular) picked out from the breeding colony of over 200,000 of them, on Bass Rock, in the Firth of Forth, UK. I was overwhelmed at the sheer magnitude of their presence, their loud wild noise, the acrobatics, and the diving birds all around us. Gorgeous birds (look at those eyes), apparently doing well, and yet, from what I had read, rather vicious—it’s called survival. It was such a memorable and, luckily, beautiful day, for cruising around that rock. I could not get enough of those birds. Bass Rock was totally white with gannets!" — Debbie R., Minneapolis, Minnesota

"Although Little Blue Herons are not unusual where I live, I was delighted to find this bird struggling with (and conquering) a frog in a lovely park in our area. I doubt the frog was as delighted as I was." — Mona G., Tampa, Florida

If you are interested in participating in our Donor Insight Panel Survey, please email greategretsociety@audubon.org for more information.