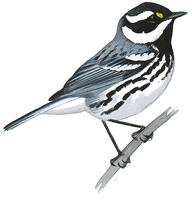 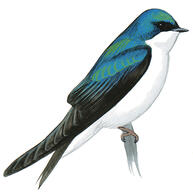 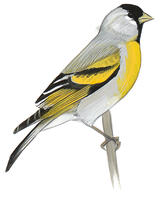 “Spring and fall migration seasons can be the most dangerous times of the year for migratory birds. We now know more than ever about bird migration, allowing us to take important steps to protect them,” said Bill DeLuca, PhD, migration ecologist with Audubon’s Migratory Bird Initiative and primary author of the study. “It’s hard to overstate the importance of protecting birds year-round, and not just in breeding and wintering habitat, if we want to secure their future.”

Using data from the Cornell Lab of Ornithology’s eBird Status and Trends team and population estimates from Partners in Flight, Audubon scientists summarized the abundance and spatial concentration of 112 species of migratory landbirds, week by week across the study regions.

1) California’s Central Valley and the Colorado River Delta along the United States-Mexico border are migration hotspots for tens of millions of migratory birds as they fly up and down western North America.

3) The Valley and Delta act as migratory bottlenecks. As birds migrate through these latitudes, they funnel into these study regions. These high concentrations of birds makes them especially vulnerable to threats. Migratory bird conservation efforts and research should therefore focus on these key regions.

Audubon California, the state office of National Audubon Society, has worked on land and water conservation efforts in the Central Valley for decades.

“We’ve long known of the Valley’s importance to migrating waterfowl, but we were astounded at the sheer number of land-based birds who also depend on the region – for instance, nearly 40 percent of all Anna's Hummingbirds migrate through the Valley in the fall. This study puts an exclamation point on what we already have come to see as the Valley’s hemisphere-wide importance,” said Meghan Hertel, director of land and water conservation for Audubon California.

The Central Valley and the Colorado River Delta are not just important for locally breeding birds, they are also important for common migratory birds that people enjoy in their backyards and parks up and down the Pacific Flyway.

“This study further demonstrates the outsized importance of the Colorado River Delta, particularly for the many birds that migrate through, including 27 percent of the global population of Tree Swallows in the spring and more than five percent of breeding Black-throated Gray Warblers in the fall, as well as many other land birds,” said Jennifer Pitt, Audubon’s Colorado River Program Director. “And while the Delta is just a remnant of what it once was—due to upstream water diversions, historic drought, and climate change—we know that targeted and strategic restoration projects with our partners in Mexico will result in positive outcomes for both people and birds.”

Many North American landbirds are declining at alarming rates, and we need to know the places that they depend on throughout the year. Audubon’s Migratory Bird Initiative is working with migration researchers and conservation practitioners to use the best available migration science to help steer conservation efforts to these critical landscapes.

Click here for an infographic from the study for third-party use (or use map embedded above).