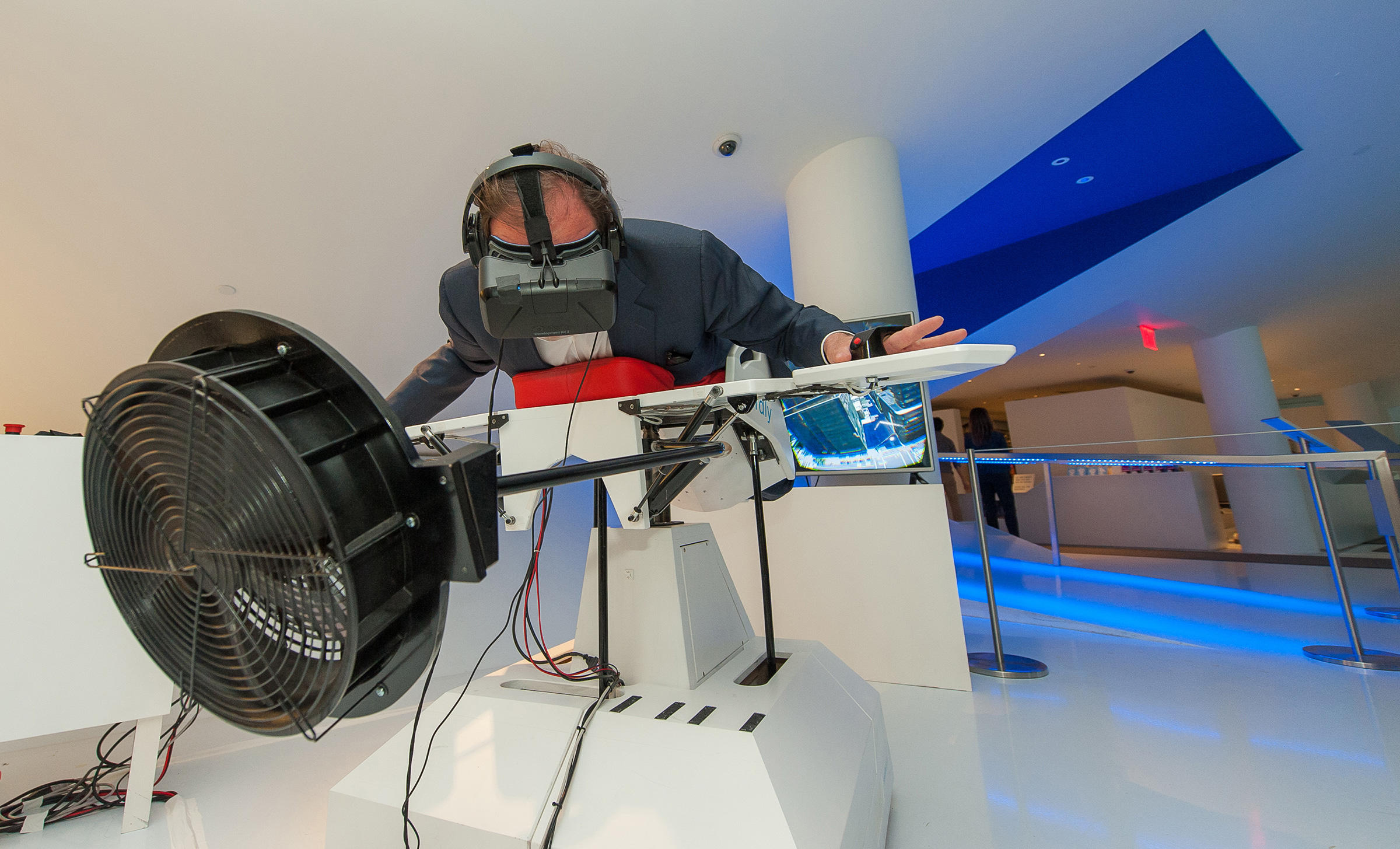 Be the Next Birdman

A Swiss flight simulator at the Museum of the Moving Image takes you to greater altitudes.

It’s my turn. I climb onto a wooden T-shaped table, padded with red cushions, and lie face down. My arms make acute angles at my sides and my palms are pressed to the wood. It’s tricky to locate two red “fly” buttons with my thumbs as a headset weighs heavy on my face, displaying an idle screen. I’m already one step displaced from reality. My thumbs soon discover, then squeeze, the red triggers that cue the visuals and the sounds. Seamlessly, the clunky accessories fade. I look to my left and see only an open sky and one downy wing, coffee tinted and flapping in wind. I can feel a breeze and hear the papery hiss of feathers. When I tilt my wings up, I ascend. When I press down, I dive alarmingly fast. At one point, I forget to flap and plunge toward the edge of the Chrysler Building and a crowded freeway. But in no time, the veers and pivots and dips all seem intuitive, almost like I’ve been flying my whole life.

This is reality—or simulated reality, at least. I’m connected to Birdly, a new flight simulator that enables its pilots to imitate an elegant bird of prey, the Red Kite. Along with the simulator’s aerial views and audio to recreate the sound of wind, touch technology reacts to the precise pressure and tilt of a user’s hands and arms—“allowing you to fully embody a bird,” says Michel Zai, a media artist and Birdly’s CEO.

But of all these Sensory Stories, Birdly is the centerpiece, currently standing in the museum’s main lobby: the first thing you see when you enter. The simulator originally hatched in Zurich, Switzerland, in 2013 when the local BirdLife conservation organization asked media artist Max Rheiner to create something for its anniversary exhibition that would tap peoples’ fascination with flight. “Flying is one of the oldest dreams of human kind,” say Zai, who works for Somniacs, the company Rheiner recently founded. Touting all of its sensory bells and whistles, Birdly comes close to making this universal fantasy come true.

But there is one glitch that might irk bird lovers. “They modeled a European bird over an American city?” UK ornithologist Ian Carter asks me as I recap my experience to him over the phone. Carter has studied European birds of prey for more than 20 years. Indeed, Birdly mimics the Red Kite, the graceful raptor that commands the skies between Spain, Ukraine, and the United Kingdom. “You would never see one flying in Manhattan,” Carter says. (To be fair, Birdly was originally modeled over Zurich’s rolling hills, farmlands, and forest. It was only later reimagined across metropolises like San Francisco and Manhattan for the American audience.)

Otherwise, Birdly serves as an engrossing and believable multi-sensory storyteller. Soon, a tiny attachable device will even spew puffs of fragrant alcohols to enhance the urban narrative—smoke and asphalt, as well as a more pleasant sea mist.

Though the Birdly experience strives for the clouds, it may also be mobilizing tangible, on-the-ground conservation: One of the simulator’s three prototypes is nestled in a small bird reserve near Zurich, and is drawing more and more visitors every day, Zai says. “Birdly makes the reserve a little more attractive to everyone,” and is hopefully amplifying the reserve’s message on conservation philosophy.

If people experience what it’s really like to be a bird, Carter says, “they may actually feel more empathy.” In this case, he says, Birdly’s vivid, audible, tactile, and soon odorous story can only help bring awareness to the magnificence and importance of birds.

Birdly is available for your flying pleasure at New York City’s Museum of the Moving Image on Fridays (4-8 p.m.) and Saturdays and Sundays (museum hours) through June 7th, 2015. The Sensory Stories exhibit will remain open until July 26th.

Correction: The simulator is Swiss and not German as previously stated in the article.