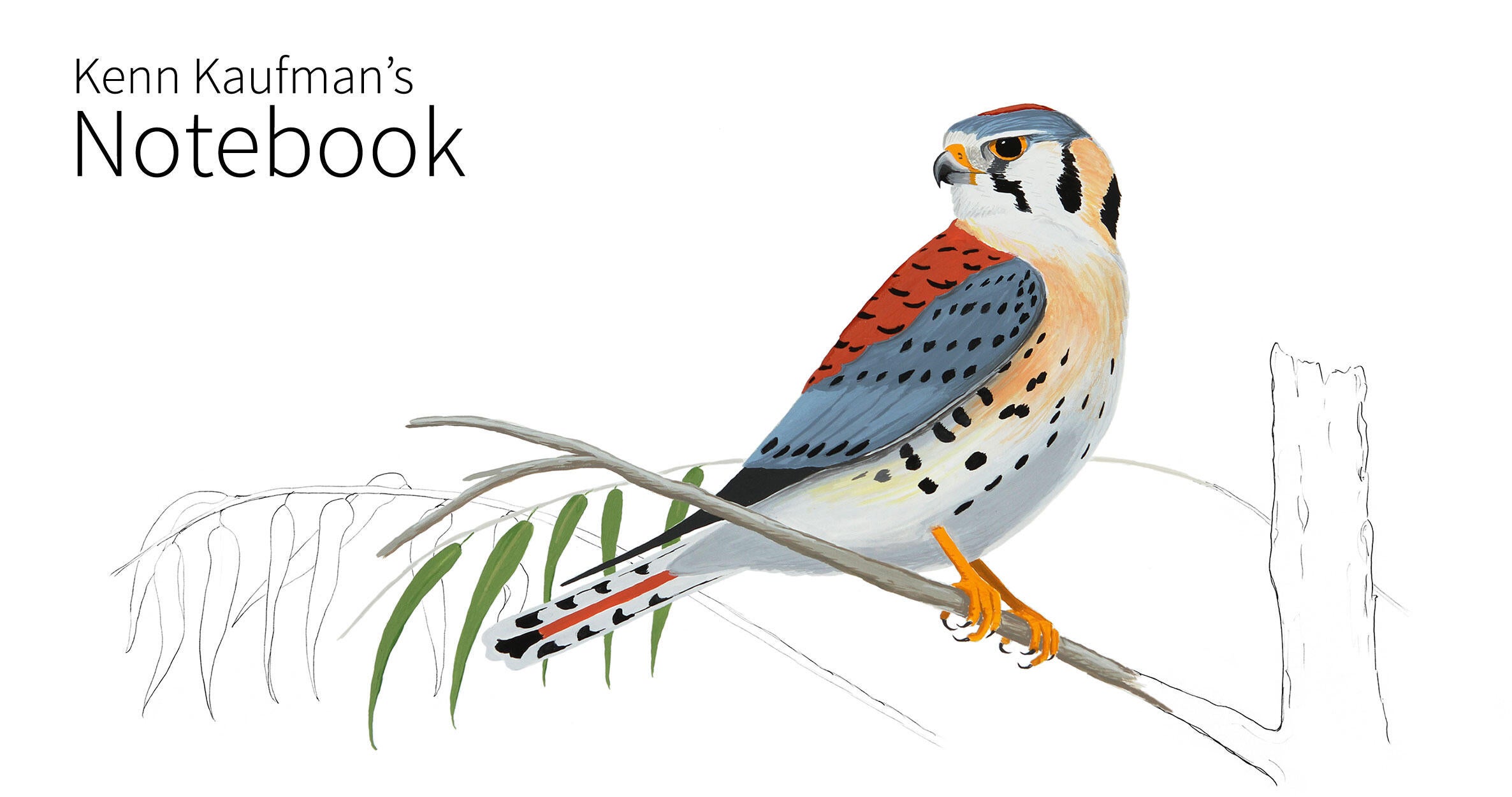 Being a Good American Kestrel Dad Comes at a Cost

Why do male kestrels lose out to females for the best wintering sites? It goes back to their roles as breadwinners during the breeding season.

Our smallest falcon, not much bigger than a robin, the American Kestrel ranges from Alaska to Argentina. Here in North America, its population has declined, and the American Kestrel Partnership—a coalition with strong Audubon support—is working to ensure its future survival. But for the moment the species is still widespread, a fairly familiar sight on roadside wires from coast to coast.

Birders soon learn to tell the sexes of kestrels apart, even at highway speeds. Females are slightly larger than males (as with most birds of prey), but more obvious are color differences: females have reddish brown wings and tail with many black bars, while on males the tail is mostly unmarked reddish brown and the wings are blue-gray. This is true even on the youngest birds, as soon as their feathers start developing in the nest.

Years ago when I lived in Tucson, a friend of mine often talked about kestrels. Scott Mills was then a grad student at University of Arizona, and he had noticed that male and female kestrels were not randomly distributed in winter. After careful observations in Arizona and southern Texas, he published his results. Sure enough, Scott was able to document habitat differences. During the winter, female kestrels vastly outnumbered males in open grassland and in irrigated farmland. Males strongly outnumbered females in wooded areas, heavy brush, and cities. Other researchers found similar patterns in California, Georgia, northern Mexico, and elsewhere. Fascinated, I started keeping tallies whenever I traveled in the southern states in winter, and it was true: Female kestrels, in general, were found in more open habitats than males.

But why? No one had a solid explanation. Because the kestrels defended individual hunting territories in winter, one suggestion was that the larger females were dominant, snagging the best turf for themselves and forcing the males into less optimal sites. But were the females’ territories actually better? We didn’t know.

Another researcher, John Smallwood, pursued these questions in central Florida. He was able to show that, yes, the more open habitats really were better for wintering kestrels. When migrating kestrels were arriving in fall, those open areas were occupied first, with territories in the more wooded sites filling in later. Kestrels on winter territories in wooded areas had to spend more of their time hunting in order to get by. Life was better in the more open sites.

So were the bigger females taking the best wintering areas and forcing males out? Not exactly. Smallwood found that once a kestrel had established a winter territory, it wouldn’t be forced out by others, regardless of the sex or age of the bird. Possession was nine points of the law. So females weren’t driving males off their turf. Instead, according to Smallwood’s research, females got the best sites because they got there first—arriving on the wintering grounds about six days earlier on average.

The great thing about bird study is that one answer usually leads to more questions. Why were females mostly arriving earlier than males? Was it just a random thing? Smallwood looked into the situation and found that molt was involved. Kestrels go through the complete annual replacement, or molt, of their feathers during summer and early fall. Growing all those new feathers takes up a lot of energy, so as a very general rule, birds don’t migrate at the same time that they’re actively molting. Adult female American Kestrels tend to finish the process of molting earlier than males, and that frees them up to migrate earlier.

Again, though, we can ask: Why? Why would the females be molting earlier?

The answer is tied up in the roles of parent kestrels in raising young. The female performs more than 80 percent of the incubation, which lasts about a month; after the eggs hatch, she stays with the young most of the time, brooding them and feeding them. Throughout this time, the male does almost all the hunting. He starts bringing food to the female about a month before she lays eggs. He continues while she incubates and then for a couple of weeks after the eggs hatch, providing the prey that the female will feed to the young nestlings. He’s on the go, feverishly hunting to feed the family, for weeks at a stretch.

The female kestrel isn’t moving around nearly as much during this time. So it’s not surprising that she begins molting and growing new feathers while she’s incubating (hey, there’s nothing else to do while sitting in that nest). The male, on the other hand, may delay molting until after the pressure eases up on his role as sole breadwinner for the family. So by early fall, when his mate is sporting a fresh coat of newly molted plumage, the male still might be growing new flight feathers.

With no reason to stick around, the female takes off—arriving on the wintering grounds before most of the males, in time to snag a fine winter territory.

Who would have guessed that a habitat difference on the wintering grounds could be traced back to behavior in the summer breeding range, months earlier and perhaps a thousand miles away? Even the most common birds have their own surprising secrets, and the more closely we look, the more fascinating they become.