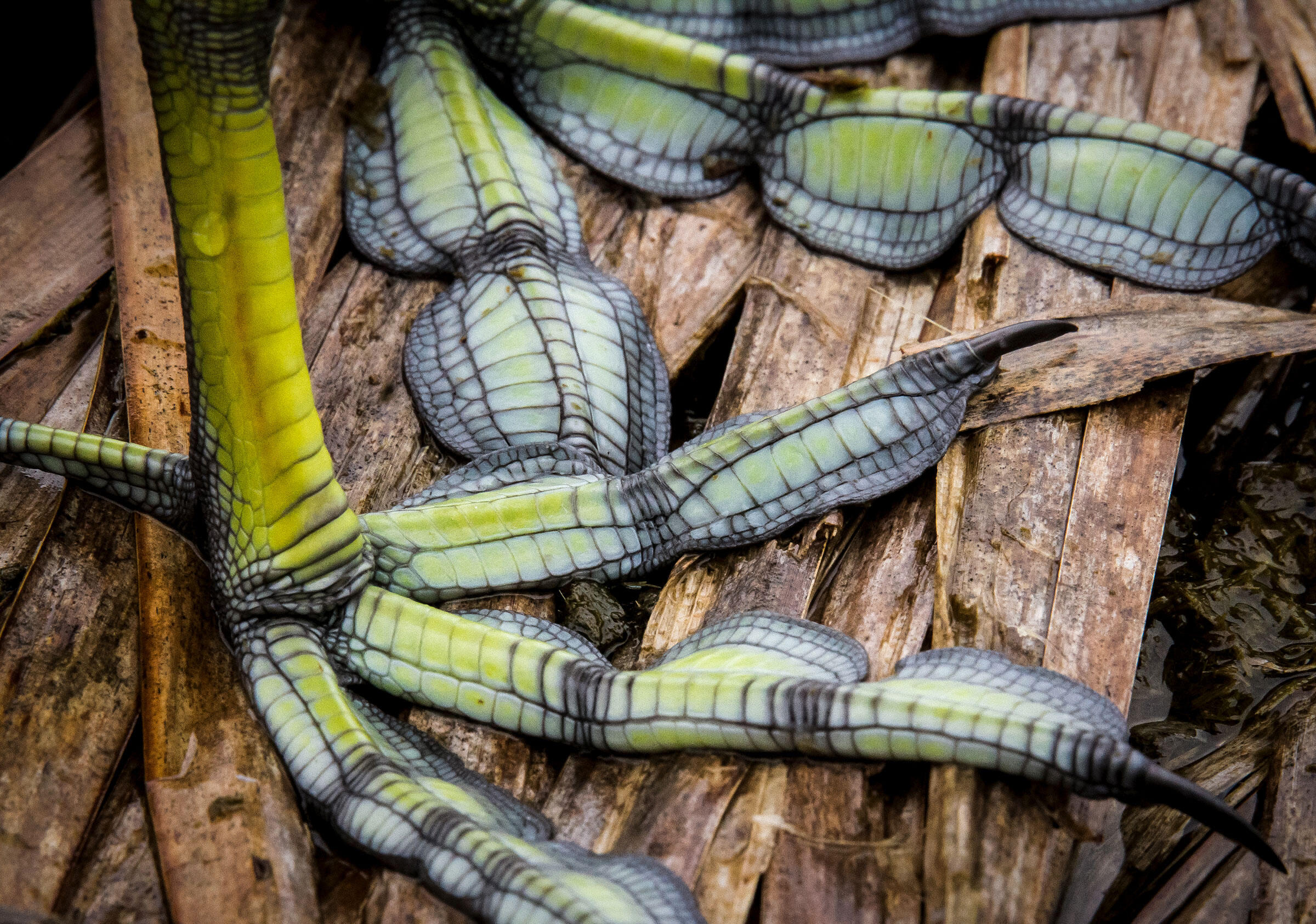 With a duck-ish head, a body shaped like a chicken, and a pointy beak to match, the American Coot looks like the most impractical mash-up of birds—and that’s just in the water. On land, you can see another part of its wacky appearance: those feet.

The bird’s long, yellow-green toes have two to three fleshy lobes that are attached to its tall, sturdy legs. The oversize, bizarre-looking feet are so striking that a vivid shot of them (above) featured in this year’s Audubon Photography Awards Top 100 gallery made a splash when it was recently posted on Instagram. Amid the flurry of “likes” and comments, some followers likened the coot’s feet to those of a dinosaur or even an alien.

While its shape might look strange to the human eye, the curious configuration of the coot's foot makes the bird adept at getting around both on water and on land, unlike most other waterfowl. Comparable to webbing on a duck's foot, the palmate toes help a coot push through the water. On land, the lobes fold back when the bird lifts its foot, which facilitates walking on a variety of surfaces like mud, grass, and even ice.

Coots aren’t the only birds with lobed feet; some grebes and phalaropes also have similarly structured toes, though not quite as long or broad. “It’s a good sort of all-purpose foot for a water bird that also spends a lot of its time walking,” says Kenn Kaufman, naturalist and field editor for Audubon.

This medium-size wader is the most aquatic member of the rail family and can be found on ponds and lakes all over the United States and parts of Canada, dabbling and diving for food. Although it spends more time in the water than other rails, the coot also spends a fair amount of time on land, where it can be found hanging out on golf courses, in parks, and even around lawns, says Kaufman.

In the water, the coot doesn’t just use those big feet for propelling itself; they are also important for getting airborne. To take flight, the birds run across the surface of the water and furiously flap their wings before they lift off.

The fleshy lobes are good for tussling, too. “If you spend any time watching a big flock of coots, you'll see fights erupt between them and they will sort of rear up and lean back and claw at each other with their feet,” Kaufman says. “Often, it’s just like teenage boys messing around on the schoolyard, but they will get really serious and birds will be injured in these fights.” 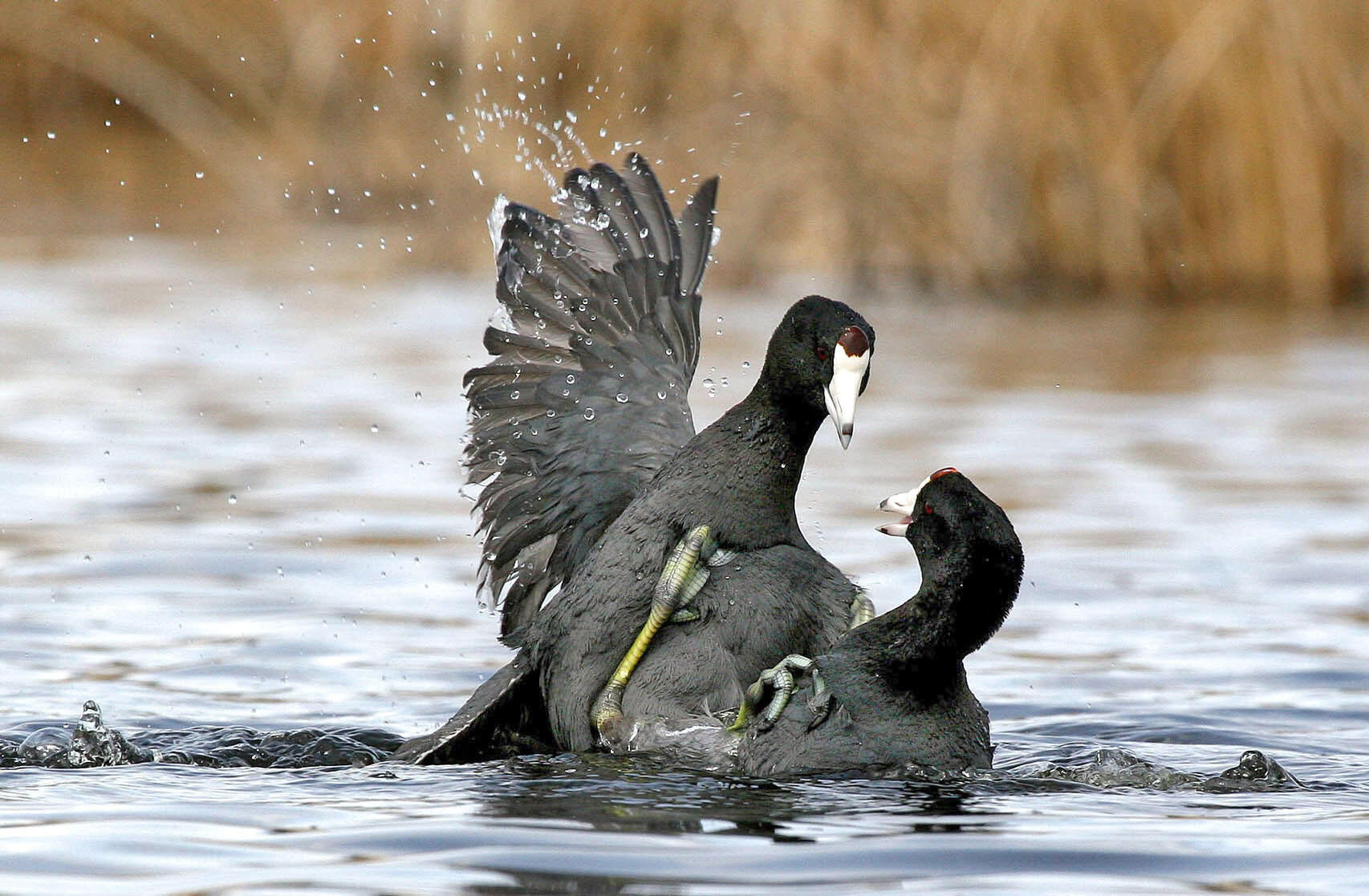 Male coots will use their feet in battles that can sometimes leave opponents injured. Photo: Bruce Lyon

Aside from their feet, the coots also have interesting family dynamics. Bruce Lyon, professor in the Ecology and Evolutionary Biology department at the University of California, Santa Cruz, started studying coots in the mid 1980s. After 30 years, he knows that these birds are much more hostile than their goofy appearance suggests.

Coot parents employ an infamously harsh parenting style, aggressively shaking or "tousling" some of their chicks by the neck. According to Lyon’s observations, parents will tousle larger chicks more than their smaller siblings, which is thought to discourage them from hanging close by while ensuring more food for the smaller, weaker chicks. Sometimes, however, the larger chicks will get a little overzealous, like in this video where Lyon caught a coot chick stealing food—and then paying the consequences.

“We’re watching the family drama . . .  it’s just like a giant soap opera,” Lyon says. “It’s hard not to be anthropomorphic and see parallels to our own families.” Say what you will about coots' parenting style, but they take care of their own. Lyon and his team have discovered that adults can tell when another coot tries to sneak an egg into its nest, a practice called "brood parasitism." When a foreign egg shows up—likely noticeable because color and speckle pattern don't match the rest of the eggs in the clutch—the parent will often reject it outright or move it to a less desirable incubation spot, giving its own offspring the best chance to survive. If all else goes right, the chicks will eventually emerge from their eggs somehow looking odder than their parents, with a bright red beak, a blaze of orange feathers, and, of course, their very own pair of big feet.