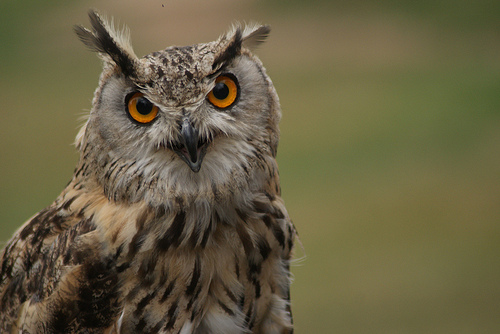 Mr. Owl, the all-star of the 1970 Tootsie Pop commercial, proved himself to be one brainy bird when he confidently revealed it took three licks to the center of a lollipop. But, little did anyone know that Mr. Owl’s large brain led to his intellect. A new study published in the Proceedings of the Royal Society B: Biological Sciences links bird brain size with intellect and stress management, and reveals that big-brained species keep their stress levels to a minimum by perceiving and handling trouble more effectively than their small-brained counterparts.

Both humans and birds secrete a stress hormone called glucocorticoid (CORT) when faced with anxiety or a challenge. Though the hormone is sometimes needed to trigger a rush of adrenaline that might help a bird escape a predator, prolonged production of glucocorticoid can seriously affect health and reproduction. For example, it can suppress immune function, reduce metabolism, or even shorten life expectancy.

A team of international researchers studying stress physiology in wild animals zeroed in on the varied ways in which birds respond to stress. To determine just how stress affects animals on the wing, they examined nearly 200 preexisting studies on anxiety levels in 119 avian species, ranging from Arctic to equatorial inhabitants. Glucocorticoid levels in bird blood samples tipped researchers off to stress levels in certain species.

“As expected from our hypothesis, glucocorticoid levels were consistently lower in species with larger residual brain mass,” write the authors. In other words, this study revealed that birds with a high brain-to-body-size ratio, like a parrot or long-eared owl, stressed less than birds with smaller brains and bodies.

So, how exactly does bird intelligence affect stress? “Big-brained birds may have the cognitive capacities to anticipate and/or avoid stressful situations” says Adam Lendvai, lead author of the study. “We think, therefore, that by [coping] with stress behaviorally, big-brained birds may avoid the costs of elevated stress hormones.” In other words, putting their noggins to the test, big-brainers like crows are able to perceive, understand, and act in light of the unknown. On the other hand, their tinier counterparts like semipalmated sandpipers enter panic mode and expel high levels of glucocorticoid before acting. The take home message? Unlike birds with small brains, large-brained birds avoid obstacles by taking action immediately and therefore avoiding the physiological associated with the stress hormone.

The scientists say they plan to further analyze the evolution of how various bird species cope with stress. In the meantime, they’re pretty confident that the famed Mr. Owl and “A Wise Old Owl” are now biologically deserving of their intellectual reputation.