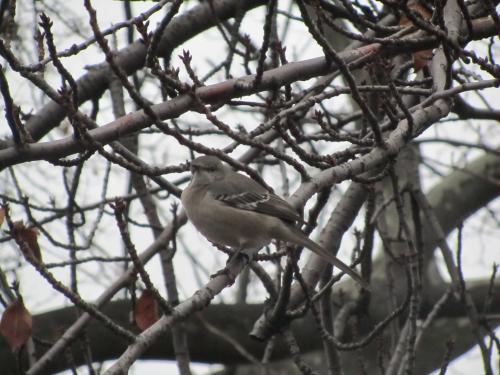 A Northern mockingbird at the Christmas Bird Count in Central Park. (Photo by Debra Kriensky)

On Sunday I went to Central Park for my first Christmas Bird Count (this year marks the 113th year of Audubon’s nationwide survey). It was a dark morning with pinpricks of rain, and birders spread out around the park into seven sectors, ready to look among bare branches for signs of life and to listen for characteristic calls.

Our group set out for the reservoir, with Davis Krauss as our guide. For Krauss, who teaches biology and geology at CUNY, this is an annual tradition. He first took part in the Central Park CBC as a 14-year-old in 1980, and every year since 1981 he’s counted at the reservoir, tallying ducks, geese, gulls, and other waterfowl. He started out under the tutelage of Lambert Pohner, a Central Park character who counted birds and butterflies there most days, sometimes sold soft drinks on Staten Island on weekends, and led the reservoir count each year until his death in 1986.  “When he died, I took over,” Krauss said. “I’ve been doing it ever since.”

For others, it was a spur of the moment decision. Maria Ramos’ and Yusef Hayes’ 8-year-old daughter convinced them the day before to hop a bus from Boston to New York to participate. She had read about the bird count in a library book, “Citizen Scientists” by Loree Griffin Burns. She counted ducks intrepidly, even though she had stayed up until 11 p.m. the night before. “Two more ducks with green heads, and it’s starting to rain,” she announced, as we made our way around the lake.

The family said they went to the Central Park count because it was featured in the book. Even though they can see birds in their own backyard, Ramos said it was special to count birds in New York City: “It’s actually kind of heartening. There’s so much nature in the city.”

There are CBCs all over the world, but the Central Park count is also special because it was one of the locations for the event’s trial run, spearheaded by ornithologist Frank Chapman in 1899, the year before it became a national activity. The first person to do the Central Park bird count was Charles Rogers, who was only 12 years old. In 1900 for the first national bird count, 27 participants counted avian species in 25 locations across the United States and Canada. Today, more than 60,000 people take part around the world each year.

The data from the Christmas Bird Count helps scientists and policymakers monitor bird populations over time. They use the data to respond to declines in species’ populations and track the effects of climate change.

Our group saw eight hooded mergansers, their “hoods” open like tiny sails behind their heads. We also saw eight American coots—just one more was spotted in the park that day—with their jet black heads bobbing distinctively as they swam. Eleven Northern shovelers swam by with their heads down to the water, out of a total of 28 in all of the park’s regions. 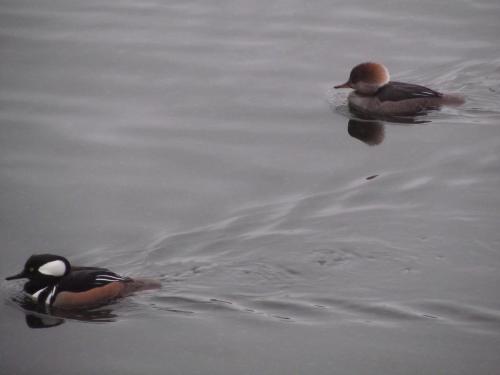 A male and a female hooded merganser at the Central Park count. (Photo by Debra Kriensky) 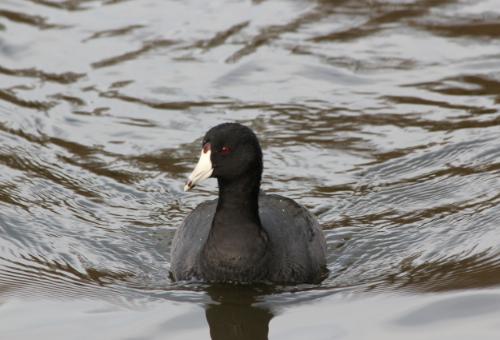 An American coot earlier this year at Central Park. (Photo by Debra Kriensky)

Our group’s 8-year-old drew the birds in her notebook with a pen, making tally marks beside their pictures and questioning the more knowledgeable birders intently on the differences between the various types of ducks. Krauss used his spotting scope to count 251 ring-billed gulls and 1,168 herring gulls and entered his tallies on his phone.

In the bushes and trees around the reservoir, we spotted cedar waxwings, mockingbirds, and numerous sparrows. A downy-headed woodpecker pecked on a tree, and robins hopped around on the rocks. We stopped by an evergreen overlooking a road where many years ago Krauss’s group saw a saw-whet owl. This year the tree was empty, as was a promising-looking stand of holly.

My favorite part of the count was seeing all the people who were devoted to the tradition. They return each year to their accustomed areas—whether the Ramble, the Great Lawn, or the reservoir—and see if their favorite birds have also come back, sharing their knowledge of the park and its birds with anyone else who shows up.

A barred owl in Central Park this fall. (Photo by David Krauss)

After four hours, all of the groups met up in the Central Park Arsenal to eat soup, drink apple cider, and combine our totals. Someone had seen a barred owl on the great lawn, the only owl counted this year. “No red-headed woodpecker?” someone else asked, a bit sadly. No, none had been spotted.

Counters had seen two common redpolls in the northwest sector and four white-winged crossbills on the Ramble—both rare sights in the park. When two teams reported a great blue heron, after some discussion it was decided that it had probably been the same bird, so it was counted only once in the official tally.

In the end, the Central Park counters saw a total of 5,721 birds from 56 species. After the compilation, I met Sarah McCarn Elliot, a birder with bright red hair who was in charge of the Central Park CBC for 20 years and has participated in the count since the 1970s. I asked her about her favorite bird she’d seen that day. “They’re all a pleasure to see,” she said, adding that she was particularly happy that three brown creepers had been tallied. They’re rarely seen elsewhere around the region, she said, but they have been recorded in Central Park since early days of the count. “I’m glad they like our park.”

If I make it to the CBC next year, I’ll be sure to try to spot Sarah McCarn Elliot, David Krauss, and the other loyal CBC birders in their accustomed park regions, listening for brown creepers, counting seagulls, and keeping their eyes out for the year’s rare find.

A white-winged crossbill in Central Park this earlier this fall. (Photo by David Krauss)