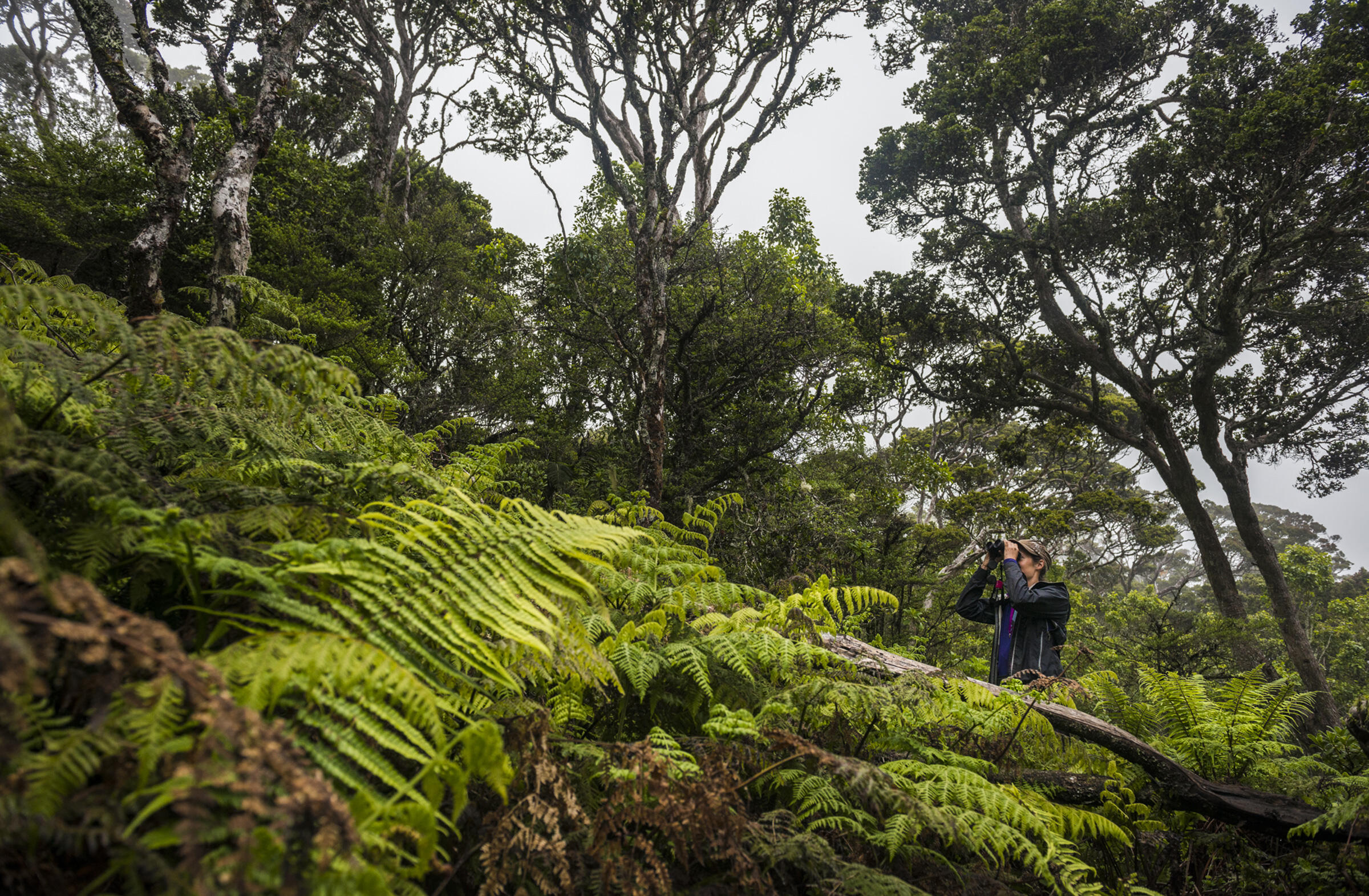 With landscapes shaped by a volcanic past, Hawaii offers birders the chance to see some of the rarest species on Earth in stunningly beautiful surroundings. Among those species are endemics such as Hawaiian Goose (Nene), Hawaiian Hawk, Hawaiian Coot, and the group known as the Hawaiian honeycreepers.

While many of the honeycreeper species are extremely endangered and difficult to find, several such as Apapane, Hawaii Amakihi, Anianiau, and Iiwi, can be located in various parks and preserves. In addition, the state offers several seacoast sites from which to scope for albatrosses, tropicbirds, and boobies.

A comprehensive birding trip to Hawaii would include travel to four main islands: Kauai, Oahu, Maui, and the “big island” of Hawaii. Your itinerary should include Hawaii Volcanoes National Park, Haleakala National Park, and Waimea Canyon. Most travelers first arrive in the capital city of Honolulu, on Oahu, where the tourism infrastructure makes island hopping relatively easy.

On the Big Island of Hawaii, this 500-square-mile national park offers a chance to see several native birds. In recent years eruptions from two sites within the park have disrupted some activities while at the same time providing a chance for visitors to see a fascinating part of earth’s geologic activity.

Hawaiian Goose is a likely sight on roadsides around the park. Hawaiian Hawk, Hawaii Elepaio, Omao, Apapane, Iiwi, and Hawaii Amakihi might be seen around the visitor center, locations on the Rim Drive, or the 1.2-mile loop hike at Kipukapuaulu.

Driving down the Chain of Craters Road could bring sightings of Hawaiian Goose, Pacific Golden-Plover, White-tailed Tropicbird, or Black Noddy.

Elsewhere on the Big Island, Hakalau National Wildlife Refuge is home to many native species, including Hawaii Elepaio, Apapane, Iiwi, Akiapolaau, Hawaii Creeper, and Hawaii Akepa. Access is restricted, however, to protect highly endangered species. To try to arrange a visit, call 808-443-2300 well in advance. A four-wheel-drive vehicle may be required.

On the island of Kauai, Koke`e State Park ranks with the best and most beautiful birding sites in Hawaii. Reaching it involves a drive up spectacular Waimea Canyon, with its reddish lava cliffs. Overlooks along the road offer stunning views.

Drive up to the Kalalau Valley Overlook for a magnificent valley and ocean view and the chance to see White-tailed Tropicbird.

Located on the cliffs of Kauai’s northern coast, this refuge is a splendid place to see a variety of seabirds, as well as a historic 1913 lighthouse. It’s a quarter-mile walk from the entrance to the actual point, where Mokuaeae Island lies just offshore.

You might even see Hawaiian monk seals on the shore below Kilauea Point.

The refuge has installed a predator-proof fence around part of its property. Keeping out cats, dogs, and rats will protect nesting Hawaiian Goose and Laysan Albatross and allow possible translocation of a colony of Hawaiian Petrel.

The road to the top of Haleakala National Park is quite an adventure, winding and ascending from near sea level to 10,000 feet in 38 miles. The reward is the otherworldly volcanic landscape at the summit.

Soon after entering the park you reach Hosmer Grove, which was established in the early 20th century as an experimental tree farm. Today it’s a place to find native birds such as Hawaiian Goose, Maui Alauahio, Apapane, Iiwi, and Hawaii Amakihi.

Even better birding is found nearby Waikamoi Preserve, where those species and rarities such as Akohekohe and Maui Parrotbill reside. However, this is a restricted area that can be explored only on guided hikes scheduled by the Nature Conservancy. The national park office can provide information about these outings.

The Kipahulu area of the park on the Maui coast is known for rainforest, waterfalls, and freshwater pools popular for swimming. Birds occasionally seen from this point include White-tailed Tropicbird, Great Frigatebird, and Black Noddy.

This small refuge on Maui was once an aquaculture site where catfish were raised commercially, but was acquired by the U.S. Fish and Wildlife Service as habitat for endangered birds. Note that it is closed on weekends. Viewing is best in the morning before the wind gets brisk. Visitors walk along a boardwalk and unpaved levees between ponds.

The major birds here are the Hawaiian Coot and the Hawaiian subspecies of the Black-necked Stilt, both endangered. They are easily seen at most times, although parts of the refuge may be closed to visitation during nesting season to avoid disturbance.

Just seven miles north near Kahului, Kanaha Pond State Wildlife Sanctuary has a fishpond that’s said to have been used by native Hawaiian royalty. The 143-acre area hosts many of the same species as at Kealia, including hybrids between the native Hawaiian Duck and Mallard (unfortunately, hybridization means that few pure Hawaiian Ducks still exist).

James Campbell Nation Wildlife Refuge, on the northern tip of Oahu, was established to assist several endangered species, including the Hawaiian monk seal, Hawaiian Coot, and the Hawaiian subspecies of Black-necked Stilt. The two birds can be seen here, although visitation is quite limited. The refuge offers tours on Saturday mornings from mid-October through January.