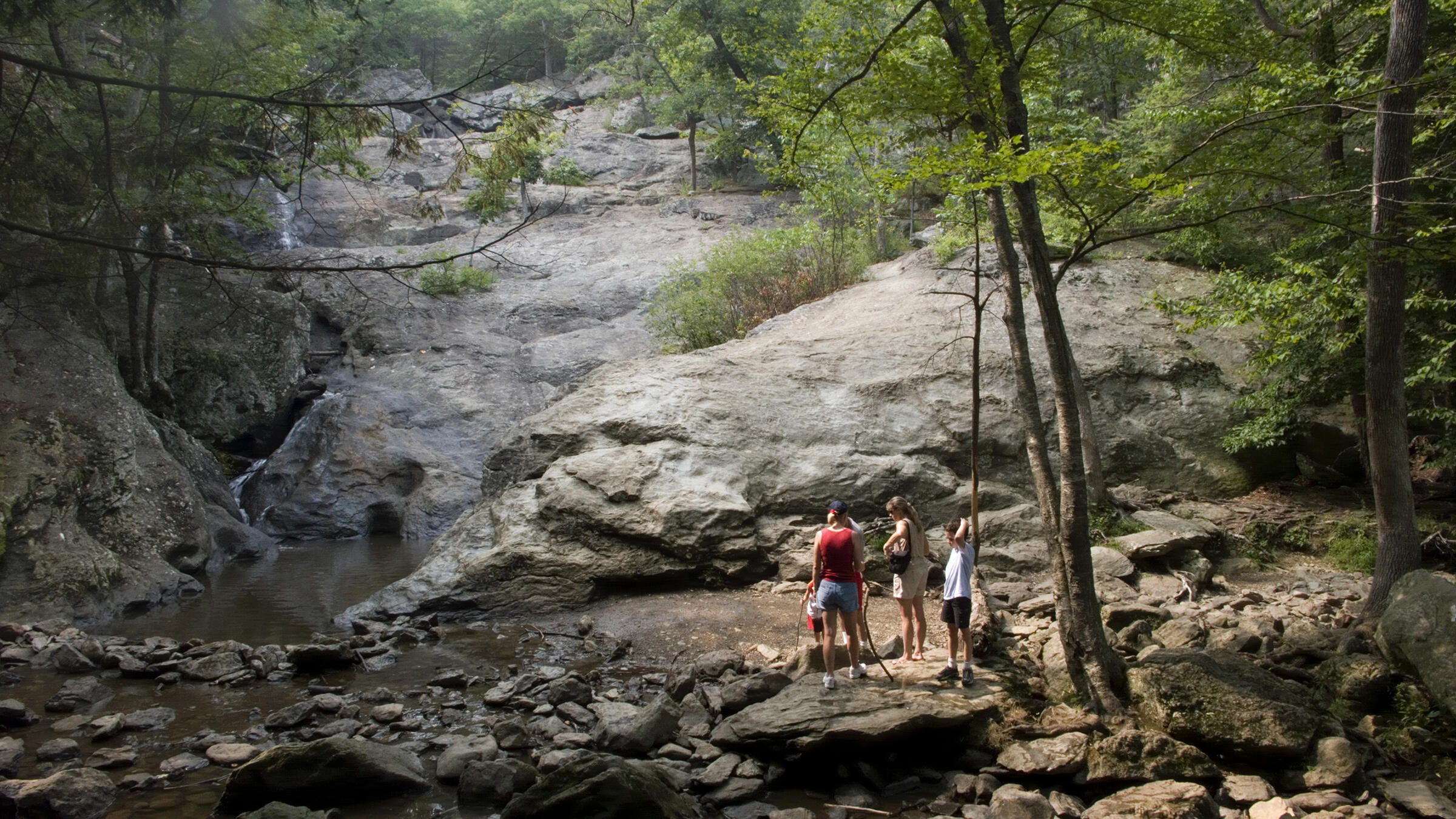 This densely populated state has some rewarding birding spots, especially on the Delmarva peninsula.

It takes only two minutes (and two miles) to drive from the southern border of Maryland to its northern border at the narrowest point, but the state stretches 250 miles from corner to corner. Within that span lies coastal saltmarshes, the Chesapeake Bay, forests of northern hardwoods, hemlock, and white pine, and highlands of the Appalachian Mountains. Maryland’s state bird list of 442 species reflects these varied habitats.

Some of the state’s best birding sites are national wildlife refuges on the Delmarva Peninsula, home to vast flocks of waterfowl, wading birds, and shorebirds, along with many nesting Bald Eagles. Points of land on the Chesapeake Bay provide lookouts for passing seabirds, and attract concentrations of migrant songbirds.

Notwithstanding its small size and dense human population, Maryland encompasses enough diversity to make it one of the most rewarding birding destinations on the Atlantic Coast.

A species list of around 290 is plenty to get a birder’s attention, and that’s what this park boasts. It sits in a very favorable location: at the tip of a peninsula, where the Potomac River enters Chesapeake Bay.

In fall, southbound migrant birds travel down this peninsula and find themselves surrounded by water, and so stop to rest. Something similar happens in spring, when birds that have crossed miles of water congregate here to recover and feed.

In addition, Point Lookout is a great place to scan the open water for ducks and all kinds of seabirds, such as loons, grebes, gulls, and terns. From fall to spring, look for scoters, mergansers, Northern Gannets, Great Cormorants, and Purple Sandpipers (on rocks).

Ospreys are common except in winter, and Bald Eagles are seen year-round. Jaegers are spotted occasionally in fall. The Brown-headed Nuthatch nests here, near the northern edge of its range. Although this is not a true hot spot for shorebirds, varied species are always present on the shore and sandbars, especially in late summer.

With one of the highest species counts of any Maryland site, this 786-acre park on Chesapeake Bay is known for waterfowl, loons, grebes, shorebirds, gulls, and terns. Unusual seabirds and other rarities also make Sandy Point a birding hot spot.

The park is located just north of the Bay Bridge linking Annapolis and the Eastern Shore, on the west side of Chesapeake Bay. It’s extremely popular in summer, so most birding takes place from fall through spring. Apart from beaches and viewpoints over Chesapeake Bay, it also has more than 200 acres of forest to explore.

Look for wintering ducks, loons, and grebes, and the occasional Northern Gannet, Great Cormorant, or rare gull such as Black-legged Kittiwake or Iceland Gull. Purple Sandpiper is sometimes seen on rock jetties. Osprey is common from spring through fall, and Bald Eagle is seen through most of the year. Peregrine Falcon is scarce year-round. Late summer can bring a half-dozen or more species of terns.

Located on an Atlantic Ocean barrier island, this National Park Service site is an excellent birding destination for all sorts of waterbirds, wading birds, and seabirds. To avoid the summer crowds, it’s best to bird there from spring through fall. During the fall, in particular, it’s known for great birding for all sorts of species.

You might start by heading to the Bayside Peninsula, reached by turning west less than a half-mile after entering the national seashore. Here you can walk the Life of the Marsh boardwalk nature trail, and there’s a point at the end of the road that allows you to scan Sinepuxent Bay. Back on the main road, the turn to Ferry Landing Road is a short distance south, and that’s worth following to the end. Just beyond that you’ll run into the Life of the Forest Trail.

Assateague can certainly be birded in all seasons, though. Highlights in winter include flocks of Brant, plus scoters and Northern Gannet; in the summer, Brown Pelican, wading birds, Osprey, and Clapper Rail; and nesting Piping Plover, plus an abundance of other shorebirds, in the spring through summer. At the height of fall migration, starting in late September, the trees and shrubs can be alive with warblers and other songbirds, and Peregrine Falcon peak in early October.

Of course, a trail that long can yield great birding opportunities. The area around Violettes Lock and Pennyfield Lock, downstream from Seneca, Maryland, provides a good three-mile walk. The canal is “watered” here (kept at a level appropriate for boating), which adds to the diversity of birds. Along this stretch of trail you can also access the 40-acre Dierssen Waterfowl Sanctuary and Blockhouse Point Park, an area that attracts some 260 species.

In addition, a number of shorebirds, gulls, and terns make their way to this part of the river seasonally. Bald Eagle may be seen year-round.

Consisting of about 90 acres at the tip of a peninsula, Fort Smallwood Park is located 11 miles southeast of Baltimore Harbor, where the Patapsco River meets Chesapeake Bay. It’s gained a reputation as a very productive spring hawk-watching site.

Mid-March to mid-May is the best time to see raptors here, with 10,000 or more recorded some years. Common eastern species such as Osprey, Sharp-shinned Hawk, Cooper’s Hawk, Red-shouldered Hawk, and Red-tailed Hawk are well represented, with smaller numbers of birds such as Mississippi Kite, Merlin, and Peregrine Falcon.

Fort Smallwood has accrued a bird list of more than 250 over the years, so you can see much more than raptors. The park can also have significant numbers of migrant songbirds in spring. Ducks, including scoters, can be seen here, along with an occasional Red-throated Loon or Red-necked Grebe. And in summer, visitors may see Snowy Egret, Black-crowned Night-Heron, Least Tern, Common Tern, Eastern Kingbird, Cedar Waxwing, Pine, Warbler, Orchard Oriole, and Baltimore Oriole.

This 28,000-acre refuge on Maryland’s Eastern Shore is most famous among birders for having the highest density of nesting Bald Eagles on the Atlantic Coast north of Florida. These raptors can be seen throughout the year from the visitor center (worth a stop, as it has exhibits and an observation area) or along the four-mile paved wildlife drive.

But Blackwater is also renowned for huge flocks of wintering geese, swans, and ducks. The refuge comprises one-third of Maryland’s tidal wetlands, and also has 24 freshwater impoundments that benefit waterbirds. Snow Goose, Canada Goose, Tundra Swan, American Black Duck, Mallard, and Northern Pintail are among the most common species. The wetlands and marsh also host many shorebirds in spring and fall.

Eastern Neck is a 2,285-acre refuge on an island along Maryland’s Eastern Shore. Visitors can sample its bird list of more than 250 species by driving four miles of paved roads or by traveling its seven trails (one of them via canoe).

Tundra Swan is the most notable refuge bird, present in large numbers from November through March. The refuge even has a special viewing platform to see swans; it’s near the bridge that provides entry to the island.

Many other species of waterfowl make Eastern Neck their home from fall through spring, including both dabbling and diving ducks. Bald Eagles are seen year-round, and Ospreys are common in nesting season. Other breeding birds include Wild Turkey, Virginia Rail, Least Tern, Brown-headed Nuthatch, Marsh Wren, and Pine Warbler.

The refuge has a visitor contact station staffed by volunteers. Various trails lead to photo blinds, viewing platforms, and a butterfly garden. Some trails may be closed seasonally to protect nesting Bald Eagles.

This 400-acre tract on the Eastern Shore, donated by a local family in 1984, operates as a working farm and conservation center. It comprises hardwood forest, freshwater marsh, brackish marsh, and wetlands. Around 240 species of birds have been recorded here.

More than four miles of trails allow access to the area, culminating in bird blinds and observation platforms overlooking wetlands. From fall through spring the wetlands host Tundra Swan and many species of ducks, while Northern Harrier flies over grasslands. Osprey can be seen from spring to fall; Bald Eagle, all year; and Golden Eagle, occasionally in winter. Spring and fall also bring a dozen or more species of shorebirds.