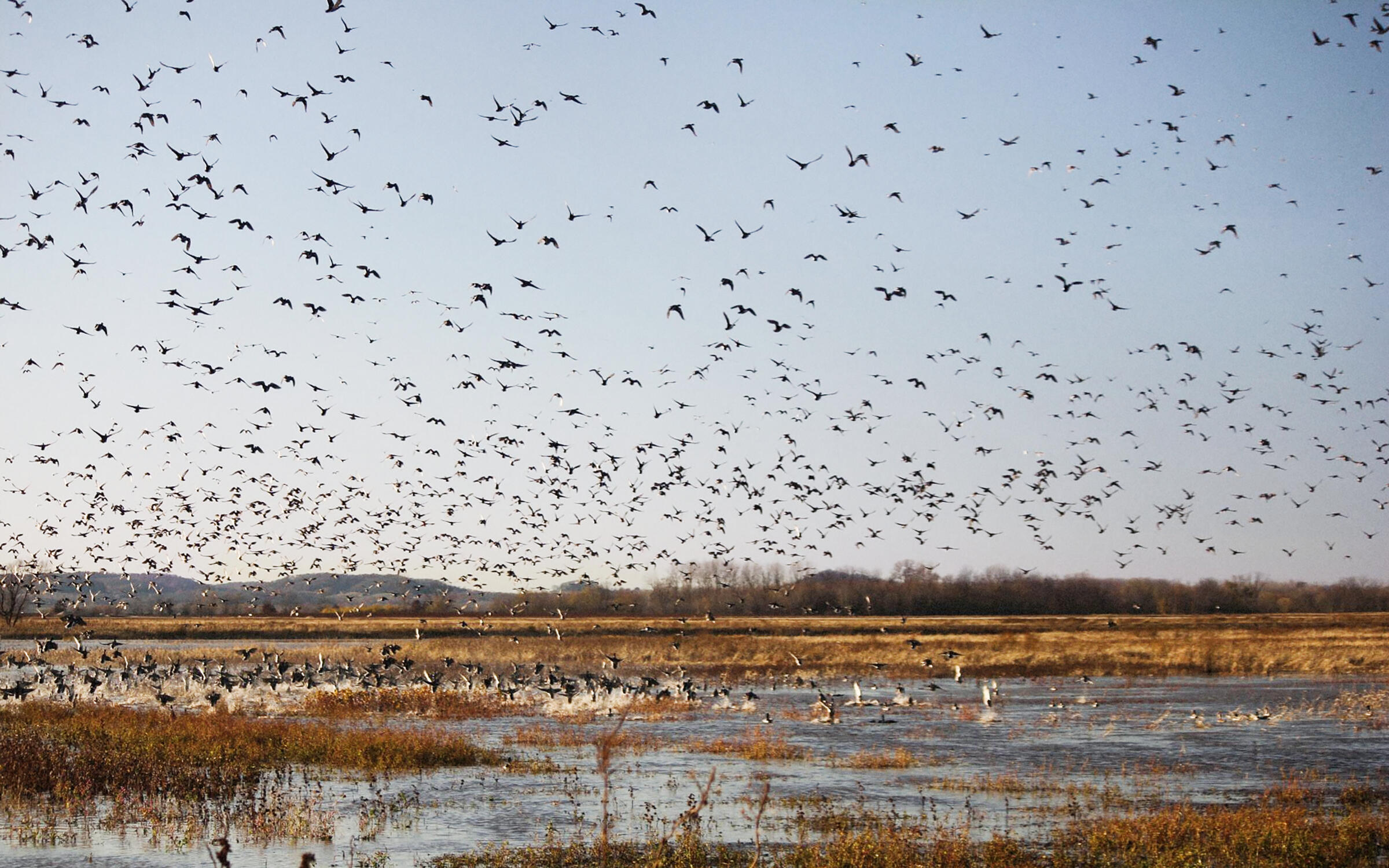 Smack-dab in the middle of the U.S., Missouri is a confluence of regions, creating a high variety of very different bird habitats—close in proximity for a great birding trip.

Missouri represents an ornithological crossroads. It transitions from southern and eastern environments to those of the Midwest, with a corresponding range of breeding birds. Swainson’s Hawk, Greater Roadrunner, Scissor-tailed Flycatcher, and Painted Bunting nest here, as do Northern Harrier, Rose-breasted Grosbeak, and Bobolink.

Protected areas include vast tracts of diverse habitat: bald-cypress bottomland swamp in the southeast, high-quality tallgrass prairie in the west, pine-oak-hickory forests on the Ozark Plateau, and waterfowl-rich wetlands throughout the state.

In the winter, birders head for spots along the Mississippi River to watch for rare gulls, and to Squaw Creek National Wildlife Refuge to observe thousands of migrant Snow Geese and hundreds of Bald Eagles. The rich woods of the Ozark Plateau, crisscrossed by lovely hiking trails and canoe streams, harbor forest species such as the Broad-winged Hawk, Chuck-will’s-widow, Acadian Flycatcher, and Worm-eating Warbler.

The Great Missouri Birding Trail will eventually act as a guide to sites throughout the state. Two of its six legs have been completed—including the St. Louis trail, which leads to many, if not all, of the state’s 412 bird species—with more to come.

Squaw Creek describes its main wetland as “a sea of white” during peak waterfowl migration. Hundreds of thousands of snow geese settle on the water in fall and early spring. The refuge is also known for its winter congregation of Bald Eagles, once logging a record 476 individuals.

Many other species of waterfowl winter at the refuge, including Greater White-fronted Goose, Ross’s Goose, Canada Goose, Trumpeter Swan, and more than 15 species of dabbling and diving ducks. In winter, too, birders may find Golden Eagle (rare but somewhat regular), Northern Harrier, Rough-legged Hawk, Short-eared Owl, Lapland Longspur, and many species of sparrow including Harris’s.

In the agricultural landscape of north-central Missouri, Swan Lake National Wildlife Refuge provides the wetlands that waterfowl and shorebirds must have to rest and feed as they migrate long distances. Its bird list of around 260 includes 29 species of geese, swans, and ducks and 32 shorebirds. True to the refuge name, Trumpeter Swan might be seen in March.

Bald Eagle nests on the refuge, and American White Pelican can be seen nearly year-round. In winter, Northern Harriers cruise over the grasslands, where Northern Bobwhite, Grasshopper Sparrow, and Dickcissel nest in spring.

Most birding at Swan Lake is done from auto roads, although visitors can walk closed roads as well. Ask at the visitor center for the key to the observation tower in an old grain silo; it has a good view of Swan Lake.

The refuge is a popular hunting area, and the auto tour road is closed from the end of October to the first Saturday in March. The observation tower, however, is open whenever the visitor center is open.

Ten miles southwest of Columbia, this 4,431-acre conservation area is known for restored wetlands: 17 shallow pools that are managed for wildlife. To birders, this translates to waterfowl, wading birds, and especially shorebirds.

Set on the Missouri River, Eagle Bluffs also has riparian woodland and grassy tracts, adding to its bird diversity. Its list of 284 species is one of the highest in the state.

May and August are the peak times for shorebirds, when 20 or more species might be counted. Caspian Tern, Black Tern, and Forster’s Tern might be zooming over the ponds, where a half-dozen species of herons and egrets could be feeding. American White Pelican, Osprey, Bald Eagle, and Sandhill Crane are seen regularly. The wetlands also attract grebes, both bitterns, Virginia Rail, and Sora.

Just 18 miles north of St. Louis’s Gateway Arch lies the site with Missouri’s highest number of recorded bird species. Riverlands Migratory Bird Sanctuary, on the west bank of the Mississippi River, has a list of 310 species, a testament to its habitats and its location in the heart of the Mississippi Flyway.

This 3,700-acre tract, located near the confluence of the Mississippi and Missouri rivers, is an Audubon Important Bird Area. It’s also home to the Audubon Center at Riverlands, an educational site that serves as a visitor center for the sanctuary. More than eight miles of trails wind through wetlands here. Trails are closed from October 15 to April 15 to protect migratory birds, though birding is still possible from roads and observation areas.

Highlights of Riverlands include nesting and migrating Bald Eagles, with dozens present in winter. Hundreds of Trumpeter Swans, and lesser numbers of Tundra Swans, are here from November into April, along with abundant additional species of waterfowl. The adjacent Melvin Price Dam on the Mississippi is famed for wintering gulls, including many rare species.

There’s something for everyone at this 6,987-acre conservation area west of St. Louis: picnicking, fishing, boating, hiking, archery, and hunting. Birders may enjoy it most of all, because its mixture of forest, grassland, scrubby fields, and wetlands means it boasts a bird list of more than 260—in the top 10 of all Missouri sites.

The office is located off Highway D, two miles west of Highway 94. Here you can get advice and a map (also available on the website), which you’ll need to find your way around the extensive area. Roads and trails crisscross the tract, and there are several designated wildlife viewing sites, including some near marshy wetlands along Dardenne Creek in the northern section.

Dabbling ducks, diving ducks, and grebes are present on area lakes from fall through spring, and Osprey can appear in migration, along with shorebirds, gulls, and terns. American Woodcock performs its display flight in March.

The diversity of habitats means a corresponding variety of avian residents, including Pileated Woodpecker of mature forest; Blue-winged Warbler of brushy areas; Belted Kingfisher and Prothonotary Warbler of wetlands; and Field Sparrow and Dickcissel of grassland. Spring migration can be excellent in this varied terrain of fields and forest, for vireos, thrushes, warblers, tanagers, orioles, and much more.

Hunting is popular here, so visitors need to be aware of seasons.

Dabbling ducks and other marsh birds, wading birds, raptors, shorebirds, gulls, terns, and songbirds are all well represented here, adding up to a bird list of more than 270. Schell-Osage is a very popular hunting area, so in fall and winter it’s wise to call and check on what seasons are in effect and which parts of the tract may be closed. Roads cover much of the area and offer access to all habitats, including seasonally flooded wetlands good for waders and shorebirds.

A few sites in southwestern Missouri allow visitors to experience a bit of the tallgrass prairie that once covered a vast swath of North America: the grasses, wildflowers, butterflies, birds, and other wildlife. Alas, the prairie was too fertile and too easy to plow, so little is left.

Taberville Prairie, 12 miles north of El Dorado Springs, is a 1,300-acre National Natural Landmark and one of the largest prairie tracts in the state. While its bird list may not be as lengthy as some other sites, it’s of very special interest, and a visit here is worthwhile for any nature lover.

From a parking area on Highway H, an old road heads east across the prairie where in May the air can be filled with the songs of Northern Bobwhite, Bell’s Vireo, Sedge Wren, Grasshopper Sparrow, Henslow’s Sparrow, Field Sparrow, Blue Grosbeak, Dickcissel, and Eastern Meadowlark. (Bobolink might be singing, too, though it’s a migrant.)

The star of Taberville is Greater Prairie-Chicken, barely holding on as a breeding bird in Missouri. Efforts are being made to increase its population, and the booming sound of the males can still be heard here in spring. Other nesting birds on the prairie are Wild Turkey, Upland Sandpiper, Scissor-tailed Flycatcher, Yellow-breasted Chat, Blue Grosbeak, and Indigo Bunting.

Mingo National Wildlife Refuge lies within an ancient channel of the Mississippi River, where the mighty stream flowed before it changed its course perhaps 18,000 years ago. One of Missouri’s greatest natural areas, the refuge protects 15,000 acres of bottomland hardwood forest within its nearly 22,000-acre footprint.

Most visitors are reminded of a Deep South environment when they see the expanse of oak-hickory lowland forest and swamps dominated by bald-cypress and tupelo. A good place to experience it is the Swampwalk Nature Trail, a 0.8-mile universally accessible boardwalk through the bottomland hardwoods. Here and on other refuge trails a visitor might see Wood Duck, Anhinga, Mississippi Kite, Barred Owl, Red-headed Woodpecker, Acadian Flycatcher, White-eyed Vireo, Fish Crow, Worm-eating Warbler, Louisiana Waterthrush, Prothonotary Warbler, Yellow-throated Warbler, and Summer Tanager.

The Ozark Highlands Auto Tour Route passes through varied habitats on the refuge, including former agricultural fields now managed for waterfowl and shorebirds. Thousands of waterfowl may be present from fall through spring, mostly dabbling ducks such as Gadwall, Mallard, and Blue-winged Teal. Migrant Bald Eagles stop here to prey on waterfowl, but also nest at Mingo.

Several observation platforms are in place along refuge roads to provide elevated views of wetlands and fields. Although the Ozark Highlands route is open only March to November, other roads remain open year-round for wildlife watching.

This beautiful state park in the Missouri Ozarks region is known for its natural spring, its fish hatchery, and fine trout fishing, but birders know it as a home for a notable variety of woodland species. Seven miles south of Cassville, it adjoins a unit of the Mark Twain National Forest.

Despite lacking much habitat for waterfowl or shorebirds, Roaring River has a bird list of more than 200. That translates to songbirds—a lot of songbirds. The park hosts several sought-after warblers, and in fact one site near the Camp Smokey area has become known as “Warbler Woods.”

This part of Missouri has a few nesting birds that are uncommon in the rest of the state, and by exploring the park or driving rural roads in the area you could find Greater Roadrunner, Scissor-tailed Flycatcher, or Painted Bunting.

Located on the Mississippi River about 50 miles north of St. Louis, Clarence Cannon National Wildlife Refuge is managed primarily for waterfowl, and at the peak of migration in October and November may have well over 200,000 geese and ducks—the great majority of them Mallards. This spectacle is easily enjoyed on a drive along the refuge roads.

The same “moist soil” techniques that benefit waterfowl also attract many other species, especially shorebirds. More than 30 species of shorebirds have been recorded at the refuge, and on a good day in August visitors can see numbers of Black-necked Stilt, Semipalmated Plover, Solitary Sandpiper, Greater Yellowlegs, Lesser Yellowlegs, Stilt Sandpiper, “peeps,” and Short-billed Dowitcher, to name just a few.

Stop first at the visitor center, which has exhibits on the Mississippi Flyway and the river environment. There are two nature trails at Clarence Cannon, and bottomland hardwood habitat adds to bird diversity in an area that was once primarily agricultural.