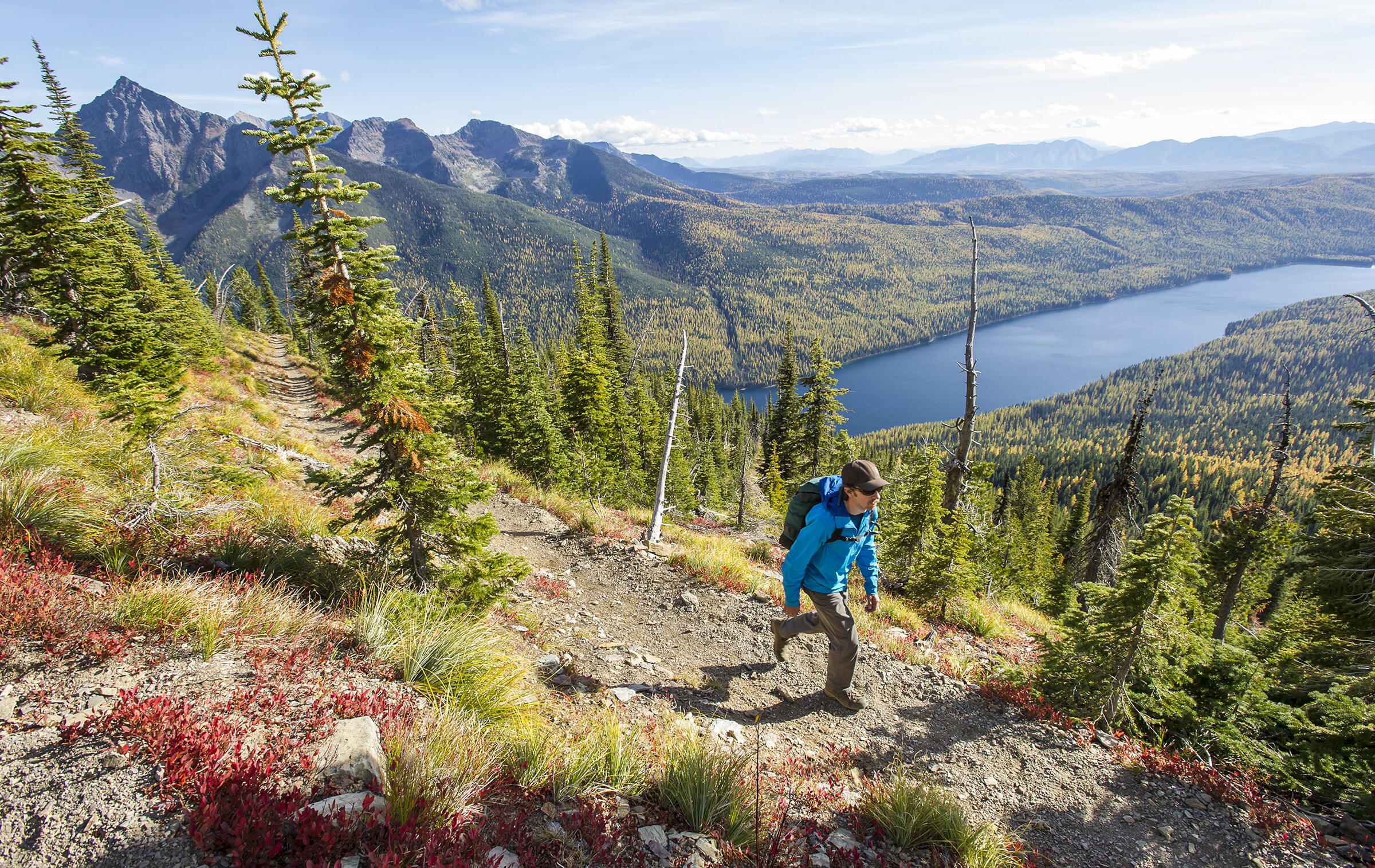 Montana spans a vast area of the Northwest, encompassing both arid grasslands and Rocky Mountain peaks. Most of the eastern two-thirds of the state is rolling prairie, while the western third features mountains and rivers much loved for terrific hiking, angling, and birding.

Glacier National Park, Montana’s most famous destination, may be the best place to see Harlequin Ducks in the lower 48. It’s also home to more than 260 other species, including White-tailed Ptarmigan, Gray Jay, Chestnut-backed Chickadee, and Gray-crowned Rosy-Finch.

Most of Montana’s top birding sites are national wildlife refuges, which provide habitat for waterfowl, most especially, but also shorebirds, grassland songbirds, and year-round raptors. Bowdoin, for example, is an Important Bird Area in the northeastern plains where you can see both Eared Grebes and skylarking longspurs.

A growing system of nature trails will help lead you to prime sites across the state. It started with the Bitterroot and Missoula valleys, but new additions are expanding its reach.

Set in the broad valley of the Bitterroot River about 22 miles south of Missoula, with the Bitterroot Mountains to the west and the Sapphire Mountains to the east, Lee Metcalf National Wildlife Refuge ranks first among Montana birding sites in number of species seen. It comprises varied wetlands, riparian forest, ponderosa pines, and grassland.

The Bitterroot Valley has been designated an Important Bird Area in recognition of its diversity. More than 240 species have been counted in the refuge, with another 20 or so present elsewhere in the valley.

The refuge is known for Trumpeter and Tundra swans and numbers of other waterfowl, including nesting Wood Duck, Cinnamon Teal, and Hooded Merganser. Twenty or more waterfowl species may be present in migration. Other wetland-nesting birds include Pied-billed Grebe, American Bittern, Sora, American Avocet, Wilson’s Phalarope, and Marsh Wren.

Set among the seemingly endless rolling grassland of northeastern Montana, Bowdoin National Wildlife Refuge is a birder’s dream destination. Its nesting wetland and prairie birds include many sought-after species, either because they’re uncommon or simply because of their beauty.

The 15-mile auto route circling Lake Bowdoin (actually an old channel of the Missouri River) makes birding easy at the refuge, but it’s also wonderful to venture out and experience the Big Sky feeling of this striking landscape.

This wetland area 35 miles northwest of Great Falls is known for enormous flocks of Snow and Ross’s geese in March and April. It’s an amazing spectacle, but there’s more to see here than this blizzard of white plumage.

Freezout is a great place to spot other waterfowl, as well as migrant and nesting shorebirds, gulls, and terns. It’s possible to drive around several ponds, scanning the bounty of birds from various viewpoints. Note this is a hunting area, and many roads are closed seasonally.

Medicine Lake National Wildlife Refuge comprises 31,700 acres in the corner of northeastern Montana, 35 miles from Canada. It’s set in a glacially shaped landscape of rolling plains and abundant shallow ponds and wetlands, and it centers on 8,200-acre Medicine Lake. The birdlife here amply rewards a trip to this relatively remote area.

At one refuge overlook, visitors can observe a nesting colony of as many as 10,000 American White Pelicans. By making a free reservation at a viewing blind from mid-April through May, birders can watch the amazing “dance” of courting male Sharp-tailed Grouse, as they attempt to impress females with their skills.

Here also the threatened Sprague’s Pipit, one of many grassland birds in decline, performs its song flight high in the air, and Northern Harriers fly low and slow over the prairie, searching for a rodent meal. Gulls and terns zoom around their colonies in constant motion, and Western Grebes swim in synchrony as a courtship ritual. Around a dozen duck species nest here.

Look for American Dipper on rocky streams and check upper McDonald Creek for the Harlequin Duck. Barrow’s Goldeneye is a scarce visitor to Lake McDonald and St. Mary Lake. Osprey and Bald Eagle are seen on any of the park lakes. Near the Avalanche Creek campground, the elusive Black Swift nests, as does Vaux’s Swift.

Famed Going-to-the-Sun Road is open from about late June to mid-October. Driving it to reach upper-elevation trails such as around Logan Pass can bring sightings of White-tailed Ptarmigan, Dusky Grouse, and Gray-crowned Rosy-Finch.

Benton Lake National Wildlife Refuge rewards visitors with the chance to see an excellent diversity of both wetland and grassland birds. Though viewing is affected by water levels, in wet years the experience is nearly unsurpassed in Montana.

Male Sharp-tailed Grouse gather here to “dance” at display grounds in spring, hoping to impress females. This performance can be observed on Fridays, Saturdays, and Sundays in April and May from a blind, which visitors enter before dawn. The refuge holds an annual lottery to determine who gets to use the blind.

It’s a bit of an adventure to reach this refuge, located about 30 miles west of Yellowstone National Park. Approach roads are unpaved and may be impassable to regular passenger vehicles until late spring. Refuge roads are also gravel or dirt and facilities are minimal, creating what the refuge calls “a rare, uncrowded, do-it-yourself experience.” The nearest gas station, for instance, is 50 miles away.

But the reward is a journey through the beautiful Centennial Valley, which holds the largest wetland complex in the Greater Yellowstone ecosystem. Mountains rise over meadows splashed with wildflowers, and Trumpeter Swans—the refuge’s signature species—cruise pristine lakes ringed by aspens and conifers. The refuge was established in 1935, when it was thought that fewer than a hundred Trumpeter Swans still existed; decades later, thousands more were found in a population in Alaska and Canada.

A northeastern Montana town with a population of fewer than 200, Westby has gained a birding reputation that far surpasses its size. A small area of wooded parkland just south of Highway 5 serves as the very definition of a songbird migrant trap.

Birds flying in spring from as far away as the tropics to nesting areas in Canada or Alaska (or returning in fall), see these Westby trees in a vast sea of grassland and drop from the sky to rest, feed, and drink before continuing their journey. Although the phenomenon is highly dependent on migration timing and weather, on a good day in May or during the period from mid-August to mid-September the site can be teeming with flycatchers, vireos, thrushes, warblers, and other birds.

Westby attracts more than its share of vagrants, too. One of the pleasures of migration birding here is the chance to find a rarity such as Black-throated Blue Warbler.

Birders visiting the college town of Missoula won’t lack for chance to get out and explore nature. Several are trails offer good birding in riparian and coniferous forest, in the area near the confluence of the Bitterroot and Clark Fork rivers.

In Big Sky Country provides birding trails throughout six major regions of the state. In the northwest, where the Bitterroot and Missoula loops are finished, magnificent forests and meadows along clear streams are inhabited by everything from massive pileated woodpeckers to tiny Calliope hummingbirds. Brilliantly colored western tanagers flash through the pines, and violet-green swallows circle overhead. In open forest stands you might spot both Lewis’s woodpeckers and Clark’s nutcrackers, named for the intrepid explorers who passed this way two centuries ago. In northeastern Montana’s high plains, the surroundings and the birds are completely different. Swainson’s hawks in summer and rough-legged hawks in winter soar and hunt in the prairies. The wide-open sagebrush flats here are among the last strongholds of the greater sage-grouse, and if you visit in spring, you may get to watch the bizarre courtship dances of the males on their traditional lekking grounds.
—Kenn Kaufman