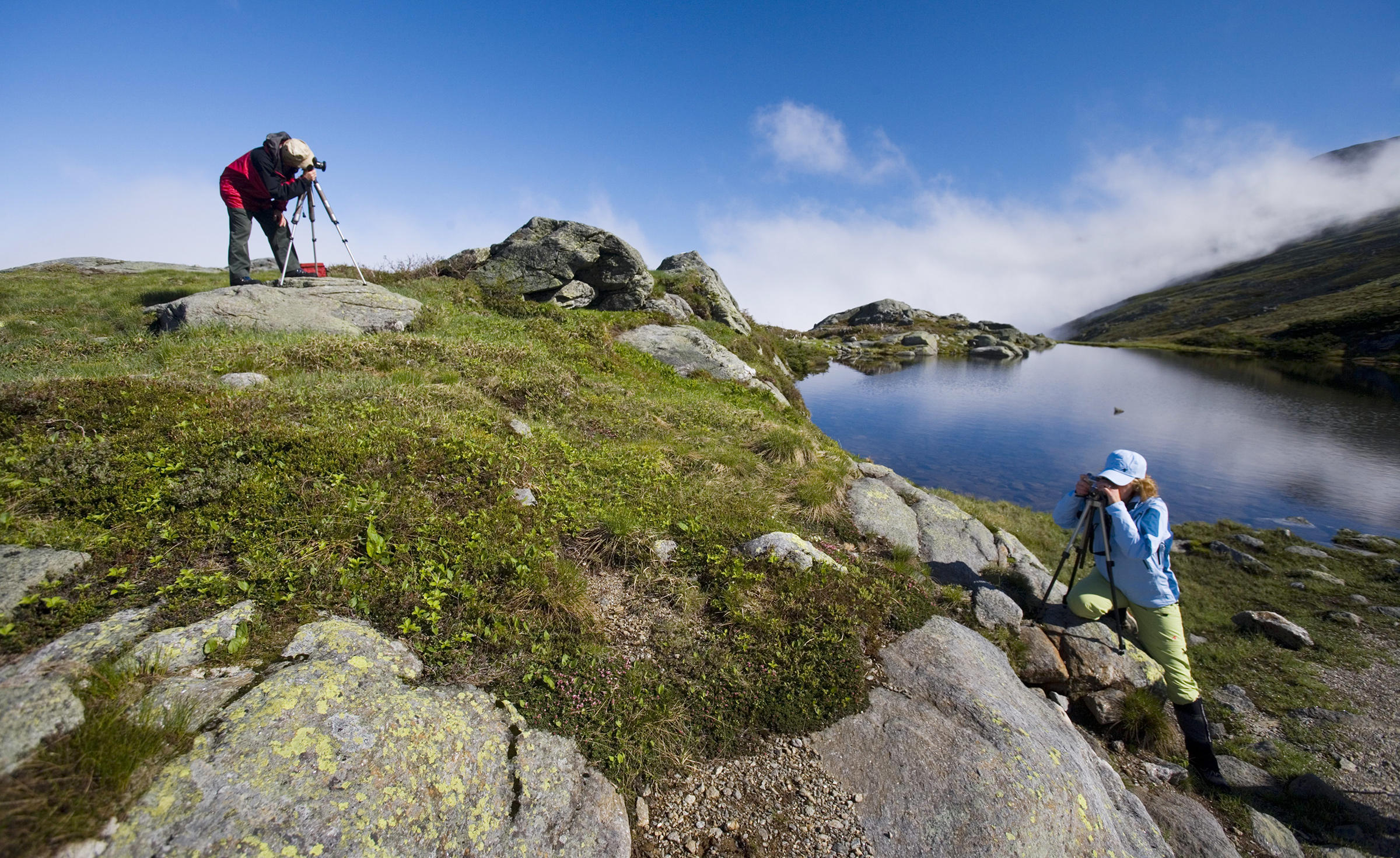 Visit New Hampshire to see birds in a great variety of habitats, from the alpine tundra to the sea.

New Hampshire may be small, but its elevation rises from sea level, where Surf Scoters dive for food, to 6,288-foot Mount Washington, a reliable place to spot Bicknell’s Thrush. Likewise the state’s habitats range from salt marsh, home to Saltmarsh Sparrows, to alpine tundra, where Horned Larks nest.

Though New Hampshire claims only a small strip of Atlantic Ocean coast—just 15 miles from north to south—that’s the area to pursue the state’s highest species count. Odiorne Point State Park in Rye, for example, combines seven distinct habitats in an hour’s walk, including the seashore, salt ponds, and uplands.

But many of the state’s most sought-after birds (Spruce Grouse, Northern Saw-whet Owl, Black-backed Woodpecker, Gray Jay, Boreal Chickadee, Mourning Warbler) are found at sites far from the sea, such as the Connecticut Lakes region near the Canadian border and the White Mountains that abut Maine.

For those wanting to spot both seabirds and boreal birds in a single trip, New Hampshire makes a splendid destination. It’s also four-season, so you can head to the coast from fall through spring and spend time inland in the summer.

At 330 acres, Odiorne Point State Park is the largest undeveloped stretch of shoreline on New Hampshire’s Atlantic Coast. It also boasts the highest species total of any birding site in the state.

The park encompasses rocky shore, beach, fresh- and saltwater marsh, and woodland. The area is excellent in migration, as birds follow the coastline and pause to rest and feed before continuing.

It’s nearly impossible to list all the birding possibilities at Odiorne Point, from waterbirds to shorebirds to migrant warblers. Winter brings scoters, Long-tailed Duck, Red-throated Loon, and Red-necked Grebe to the coast, along with Great Cormorant, Purple Sandpiper (rocky places), Razorbill, Black Guillemot, and Bonaparte’s Gull. Virginia Rail, Sora, and Marsh Wren might be seen in marshes in migration.

This refuge has no staff on site and no visitor center, just a kiosk. It does have two trails open all the time that are good for general birding year-round. The Peverly Pond Trail is an easy half-mile walk; the Ferry Way Trail is two miles and leads through old fields to a marsh on Great Bay. Some birds seen here are Wild Turkey, Osprey, Bald Eagle, Pileated Woodpecker, Eastern Bluebird, and several nesting warblers including Ovenbird, Black-and-white Warbler, and Pine Warbler.

Several locations around Great Bay also offer good birding opportunities. On the south side of Great Bay, the Great Bay Discovery Center at Sandy Point has a 1,700-foot universally accessible boardwalk leading through woodland to a salt marsh. Migrant waterfowl and a wide variety of migrant and nesting songbirds can be found here.

On the west side of Great Bay, Adams Point Wildlife Management Area occupies a peninsula on the bay, and has hiking trails and an observation platform. Adams Point is known for wintering Bald Eagles and also offers good viewing of various waterbirds.

With its access to miles of beach and its reputation among recreational-vehicle owners, Hampton Beach State Park is too full of fun-seekers for much birding in summer. But from fall through spring it’s a great place to explore—another of the New Hampshire coastal sites from which to scan the Atlantic.

The open camping areas and beaches that are full of people in summer can attract birds in winter, such as Snowy Owl, Horned Lark, Lapland Longspur, Snow Bunting, and Common Redpoll. In April and May, raptors are often seen heading north.

From the park, drive south on Highway 1A and cross the bridge at the Hampton Harbor Inlet. Park on the west side of the road south of the bridge to scan Hampton Harbor. Birds here are dependent on tides, but the area can have lots of waders and shorebirds at times. It’s also possible to park and walk out to the small pier here to scan the harbor.

The 7.5-mile toll road to the top of Mount Washington offers a straightforward, if somewhat pricey, way to get to the habitat of many sought-after high-elevation species. Open from about early May to late October, it ascends through conifer forest to the 6,288-foot treeless summit—a place legendary, or infamous, for its severe winter weather.

The bird star of the Mount Washington show is Bicknell’s Thrush, which has a very restricted range in northeastern North America. In this country it nests only on the highest peaks in the Northeast. Stopping to listen for its song at about the four-mile mark and beyond on the auto road provides to chance to find one. Knowing the song is vital.

The company that operates the toll road has begun offering special tours to find Bicknell’s Thrush in June, going up early in the morning before the road opens to normal traffic.

A mix of ponds, boreal spruce-fir forest, riparian woodland, and wetlands, it’s reached from a trailhead on Airport Road southeast of Whitfield. A flat trail, an old railroad route, leads to viewing platforms on Cherry Pond and Little Cherry Pond, and connects with other walking routes. Hunting is allowed here, so check in advance about seasons.

The remote Connecticut Lakes region in far northern New Hampshire is known among birders for north woods species, some of which are uncommon to rare elsewhere in the state.

The major birding route entails driving north on Highway 3 from Pittsburg toward the Canadian border, 22 miles away. Hiking trails are few in this boggy area, so birders usually just stop along the road at places that look promising. It’s also possible to venture down unpaved side roads (being mindful of traffic from logging trucks).

Eighteen miles from Pittsburg, the Deer Mountain campground and nearby Moose Falls offer a chance to get off the highway. About 0.6 mile south, take East Inlet Road off Highway 3, turn left at a T intersection in less than half a mile, and follow signs to Scotts Bog, another site to explore. But any of the roads in this area can be good for birding.

The Connecticut River’s upper stretch marks the meandering border between these two New England states, and it also links a series of more than 120 fine birding sites on this trail. Many featured locations are in beautiful forests, and a visit in spring or summer will give you a chance to glimpse such colorful songbirds as rose-breasted grosbeaks, tiger-striped Cape May warblers, and fiery orange Blackburnian warblers. Away from the river, some upland forests are home to birds more typical of the far north. The bold, cheeky gray jays, sometimes called “camp robbers,” are fearless birds that may fly up to greet you, but you’ll probably have to search to find the quiet and elusive blackbacked woodpecker. The region also features many pristine wetlands. In addition to the Connecticut River itself, a favored migratory route for various waterfowl, there are marshes where chunky American bitterns stalk among the reeds and ponds that also host great flocks of ducks during their migrations in spring and fall. Worth seeking out on a special trip are those larger lakes where common loons come to spend the nesting season, filling the summer nights with their wild mournful yodeling. —Kenn Kaufman