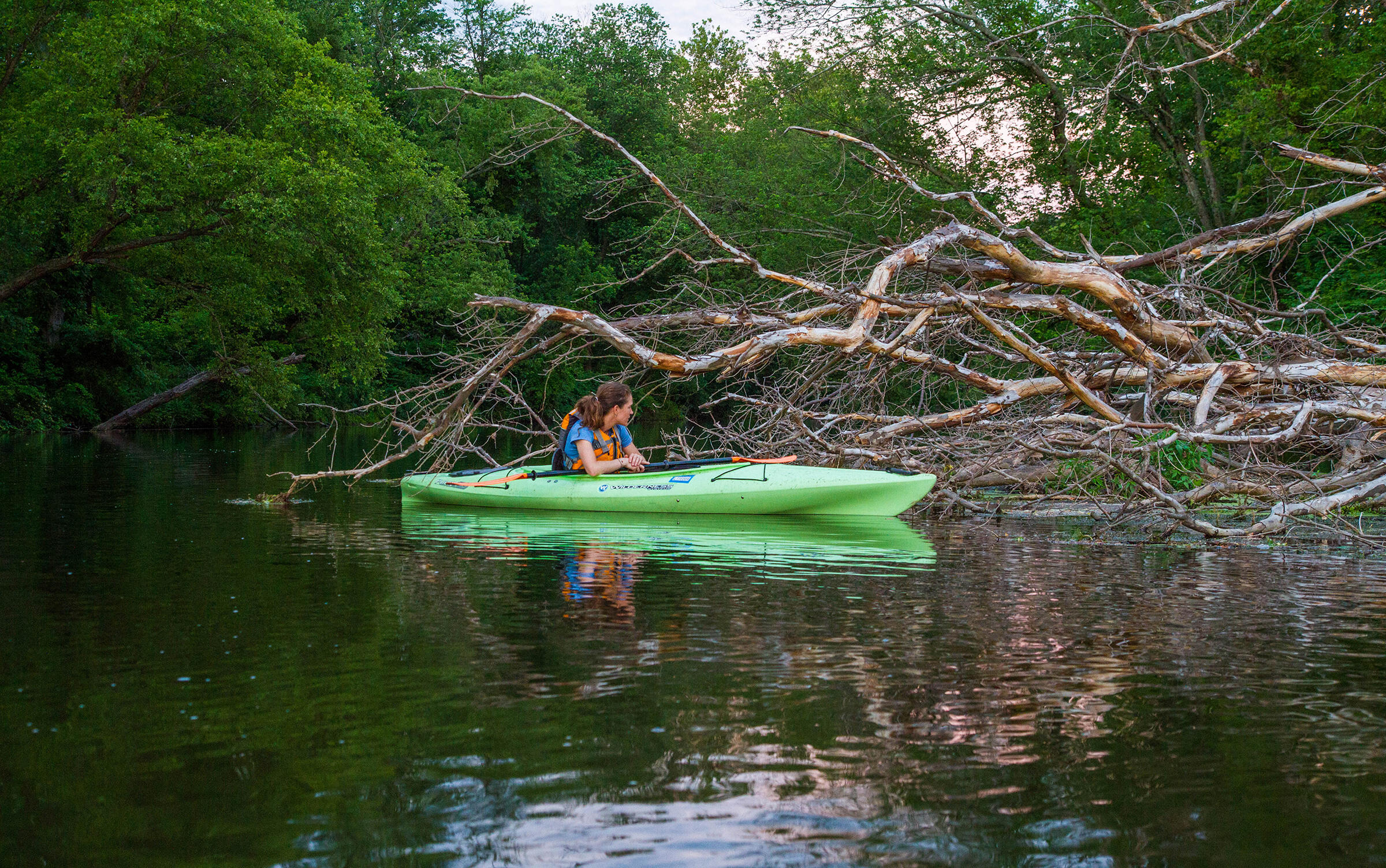 Move past the suburbs: This small state packs a punch with habitat variety.

When it comes to birding, there’s probably no state with a greater disconnect between image and reality than New Jersey. Many people think of New Jersey as suburbs, factories, turnpikes, and seaside tourist towns like Atlantic City. It is true that it’s the most densely populated state, but it’s just as true that New Jersey encompasses a wide and rewarding array of habitats and natural areas.

Each May, the New Jersey Audubon Society holds a one-day competition called the World Series of Birding. In some years, the winning team has recorded more than 230 species. That’s over the course of just 24 hours.

The reason the World Series yields such big numbers is the great diversity of habitats in such a relatively small state. New Jersey contains barrier islands on the Atlantic coast; extensive marshes on Delaware Bay; mixed pine-hardwood forest in the central part of the state; grasslands in the north; protected areas such as Great Swamp National Wildlife Refuge, just 20 miles from Manhattan; and highlands in the northwest corner that host breeding species associated with higher latitudes.

And of course, there’s Cape May, which has become legendary for its fall migration. Cape May contains a diverse array of habitats on a single peninsula, attracting surges of neotropical migrants, shorebirds, waterbirds, hawks, and owls. You can have your own World Series there on pretty much any autumn day.

Cape May’s avid birders (and there are many) would argue that this peninsula where Delaware Bay meets the Atlantic Ocean is the birding capital of the nation. They have a point.

Migrants naturally congregate here both northbound and, especially, southbound, creating days in spring and fall where it seems every tree and shrub is full of birds in places like the Cape May Migratory Bird Refuge or Higbee Beach Wildlife Management Area. The hawk watch here is legendary, with thousands of raptors passing Cape May State Park on some days in September and October.

Newcomers would do well to stop at New Jersey Audubon’s Cape May Bird Observatory at the corner of Lighthouse Drive and East Lake Drive for information on the many birding opportunities in the area. A wide variety of programs and field trips are offered here, and the staff is always friendly and ready to offer advice.

Birding is at its best at Cape May in spring and fall, and the Bird Observatory’s website has information on the very popular festivals held at those seasons, with expert speakers and field trips.

Many factors contribute to the park’s lengthy bird list. Shorebirds feed on its beaches and marshes, and some nest. Seabirds such as scoters, loons, Northern Gannet, and Great Cormorant can be spotted in and over the Atlantic from fall through spring. Migrants including raptors and songbirds follow the coastline and are concentrated by the island’s narrow width. Waterfowl and wading birds frequent the wetlands and coastal marsh.

This narrow peninsula extends for six miles off the New Jersey coast toward Lower New York Bay. Much of it is administered by Gateway National Recreation Area, and it’s very popular with summer beachgoers. Birders visit mostly from fall through spring, when the human population declines.

Sandy Hook’s birding reputation is based on several things. It’s an excellent place in migration, when traveling birds are concentrated on this thin spit of land. In both spring and fall, wind generally from the west pushes migrants to the coast. Many vagrants have appeared here, from Townsend’s Solitaire to Townsend’s Warbler.

In winter, Sandy Hook offers sites from which to scan the ocean for Brant, scoters and other diving ducks, as well as seabirds such as loons, grebes, Northern Gannet, Great Cormorant, Razorbill, and gulls both common and rare.

One of the best-known birding locations on the Atlantic Coast, this refuge is located less than ten miles north of Atlantic City. More than three-fourths of the area’s 47,000 acres is salt marsh, creating a perfect habitat for waterfowl, wading birds, shorebirds, gulls, and terns.

The most popular birding activity here is a drive around the eight-mile wildlife drive, which passes alongside diked impoundments where water level is managed to benefit birds. Well over 300 species have been seen on this route alone, testifying to the richness of these wetland habitats and the refuge’s location along the shore on a major migratory path.

More than 30 species of geese, swans, and ducks have been recorded here, along with 16 species of herons, egrets, ibises, and even Roseate Spoonbill. Rails are found in the marsh grasses, and it’s not unusual to see seven species of terns in summer along with Black Skimmer. But it’s shorebirds that may be the refuge’s main attraction, with more than 40 species on its list, including rarities such as Spotted Redshank, Ruff, and Curlew Sandpiper.

A few of the nesting birds of the refuge or nearby areas are Least Bittern, Osprey, Bald Eagle, Chuck-will’s-widow, Peregrine Falcon, Saltmarsh Sparrow, and Seaside Sparrow.

Located less than 25 miles from Manhattan, Great Swamp National Wildlife Refuge is a 7,768-acre swath of forest and wetlands surrounded by suburban neighborhoods and shopping centers. Once destined to be a major airport, it was saved by conservationists in the 1960s. It’s a fine destination for birding anytime of year.

A local volunteer group operates a visitor center on Pleasant Plains Road just northwest of the refuge, with information on the area and a nature trail. The main site for natural interaction is a boardwalk on Long Hill Road, with adjoining trails. The longest trails are found east of Long Hill Road, in a mostly undeveloped part of the refuge. Nearly all birding here is done on foot, as the refuge’s location means it lacks the long auto tour routes of many national wildlife refuges.

These areas in the northwestern corner of New Jersey are noted for beautiful forests, scenic views, a section of the Appalachian Trail, and, of course, for the highest point in the state at 1,803 feet. Birders know them for hosting several nesting species, some of northern affinity, that are rare or uncommon elsewhere in the state.

Miles of trails crisscross High Point and Stokes, providing access to many different habitats. A good trail for some of High Point’s notable birds is the Cedar Swamp Trail, looping around a high-elevation bog where Atlantic white cedar grows profusely.

In fall, birders gather at Sunrise Mountain on the eastern side of Stokes to watch for migrating hawks. September and October are best for the more-common species, with an occasional Golden Eagle or Northern Goshawk most likely in late October or November.

These two adjacent areas in central New Jersey provide fine birding year-round for a wide range of species. Spruce Run Reservoir, north of the town of Clinton, is accessed off Van Syckles Road. The wildlife management area lies to the west, and can be entered from parking areas on Van Syckles Road or Charlestown Road (Road 635). The Black Brook trail is a favored birding site.

Ducks, loons, and grebes are present on the reservoir from fall through spring. Osprey is here except in winter, and Bald Eagle is present year-round. In suitable shoreline spots shorebirds may feed, especially in August and September.

New Jersey’s coast on Delaware Bay is rich in marshes and other wetlands, many protected as hunting sites or other natural areas. One favorite birding destination here is Heislerville Wildlife Management Area, located off Highway 47 near the community of the same name. Its bird list leans heavily toward waterfowl, wading birds, shorebirds, gulls, and terns attracted to its impoundments and marsh and mudflats.

Matt’s Landing Road leads to the prime birding spots, and roads loop through the area for several miles. In May, look for common shorebirds such as Semipalmated Plover, Greater Yellowlegs, Willet, Lesser Yellowlegs, Least Sandpiper, Semipalmated Sandpiper, and Short-billed Dowitcher, to name just a few. With birders keeping regular watch here, rarities such as Ruff and Curlew Sandpiper have been spotted.

Seven miles west (much longer by car), Glades Wildlife Refuge is another of the great birding sites in southern New Jersey. A kiosk at the corner of Turkey Point Road and Maple Avenue has information on trails, both walking and paddling. The focus is on waterbirds, but “southern” birds such as Kentucky Warbler, Yellow-throated Warbler, and Summer Tanager can sometimes be found in this area. Turkey Point road is known as a place to hear Black Rail in spring.

Named for the “gap,” or valley, where the Delaware River cuts through a part of the Appalachian Mountains, this National Park Service site takes in areas on both sides of the river, in New Jersey and Pennsylvania. It combines splendid scenery, recreation, and history.

The favorite birding activity in the park is a drive along Old Mine Road, which parallels the river from Interstate 80 heading north. For most of the way, the road is narrow, tree-lined, and lacking almost all development. Old Mine Road runs about 25 miles to Dingmans Ferry, but some of the best birding is in the first 12 miles from I-80.

To maximize chances of seeing as many of these birds as possible, stop at a variety of habitats: hardwood forest, conifers, scrubby areas, and fields

This tract of high ground is known among birders basically for one thing: the amazing number and variety of migrant species that can be present on a good day in May. Garret Mountain birding entails searching the woodland in spring, and to a lesser extent fall, for birds that stop to rest and feed in this patch of greenery amid an urban landscape. It can also be good for migrant raptors.

Located south of Paterson, the 568-acre park is easily accessible, as roads wind up through woodland to bluff overlooks with far-reaching views. Eight miles of trails are available for exploring the area. Garret Mountain has been designated an Audubon Important Bird Area and a National Natural Landmark.

When weather is right (the day after a south-moving front is best) the woods here can be alive with flycatchers, vireos, thrushes, warblers, sparrows, orioles, and miscellaneous other species such as Scarlet Tanager and Rose-breasted Grosbeak. One of the famed “20-warbler days” is not just possible but likely. Sometimes seen rarities such as Bicknell’s Thrush and Swainson’s Warbler add to the excitement of a spring day at Garret Mountain.

Developed by the New Jersey Audubon Society, these trails reveal the Garden State’s remarkably rich birdlife. One completed route winds through Cape May and the southern Delaware Bay shore, comprising one of the continent’s most famous regions for observing migratory birds. The massive flocks of red knots and other shorebirds that gather here in spring have drawn both international acclaim and focused conservation concern. The autumn flights of raptors at Cape May are world-class, offering glimpses of everything from speedy little sharp-shinned hawks to powerful peregrine falcons and huge golden eagles. Farther north, another completed trail shines a spotlight on a very different region, the Meadowlands in northeastern New Jersey. Just a few miles from the heart of New York City, the Meadowlands play host to more than 200 bird species, from great blue herons and bald eagles to colorful little warblers and goldfinches. In the Skylands Trails in New Jersey’s northwestern highlands you'll find cool evergreen forests cradle nesting birds of northern affinities, like blue-headed vireo singing their short whistled phrases and northern waterthrushes teetering back and forth alongside creeks. —Kenn Kaufmann