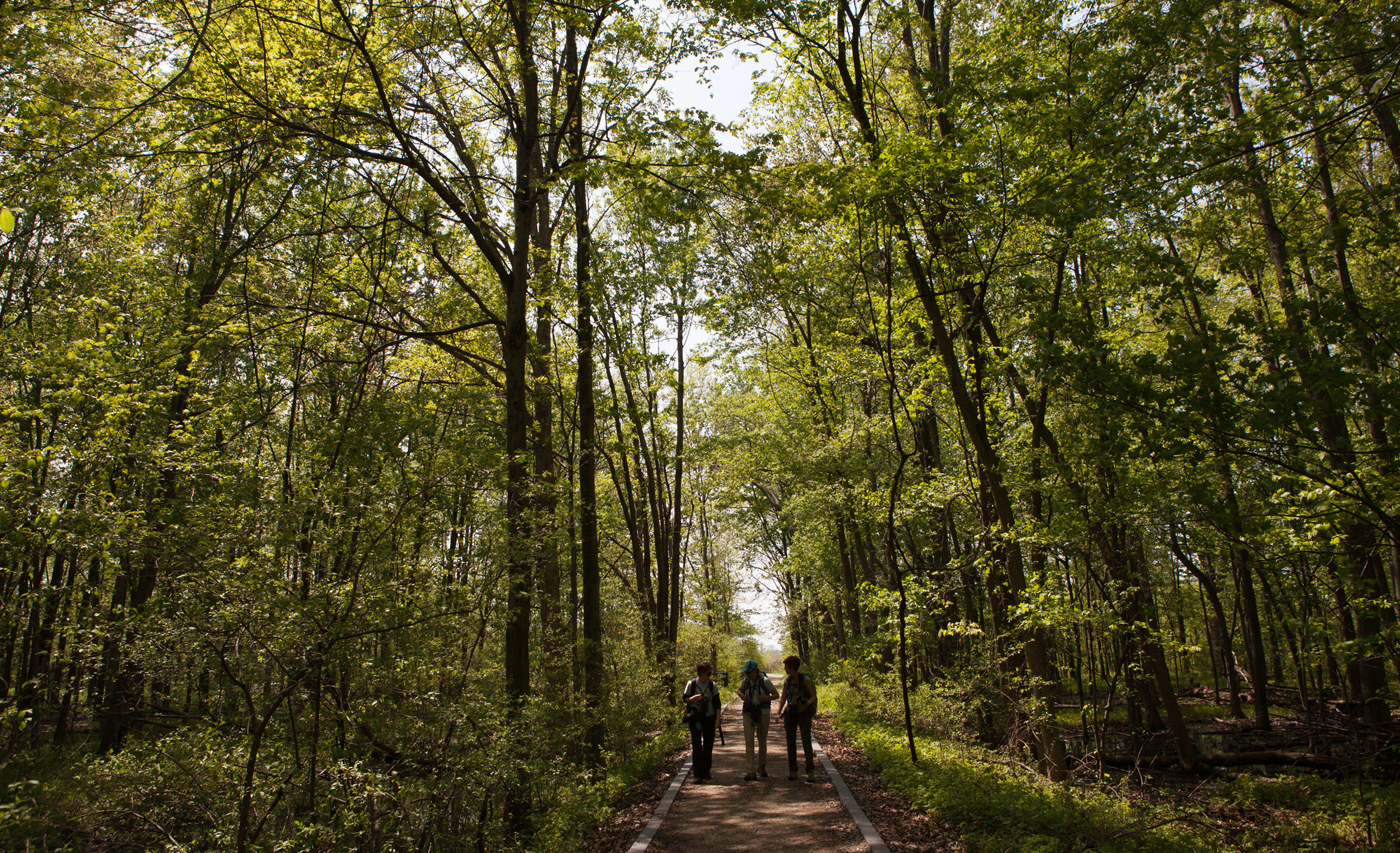 Take a birding trip to Ohio, where you can experience the self-proclaimed "Biggest Week in American Birding."

Northwestern Ohio calls itself “the warbler capital of the world” and hosts a spring festival named “The Biggest Week in American Birding.” That may sound hyperbolic, but there’s some basis for the boast. At Magee Marsh Wildlife Area, great numbers of migrating songbirds (especially warblers) stop to rest and feed before they continue north in spring, many flying over Lake Erie. It’s one of the most exciting gatherings of birds and birders in the world, and it ought to be on every birder’s bucket list.

Fine birding can be found all along Ohio’s Lake Erie shore, where migrants (including raptors) often follow the shoreline, and winter brings gatherings of waterfowl, loons, grebes, and gulls. To immerse yourself in this environment, stop by Headlands Beach State Park, a mile-long natural sand beach with adjacent swampland.

For a different suite of birds, head southwest to Killdeer Plains Wildlife Area. Its mix of cropland, grassland, woods, and water has attracted a record 275 species. Much farther south, near the Ohio River, you can find “southern” nesting species uncommon or not present elsewhere in the state. All told, sightings in Ohio can add up to a fine weekend, and, yes, even a very big week.

Killdeer Plains, about 50 miles north of Columbus, is a popular destination for winter birding. Much of the 9,320-acre tract is grassland, with some scattered remnants of tallgrass prairie (and more in the process of being restored).

Check the open areas adjacent to Roads 115 and 75 for Rough-legged Hawk and Short-eared Owl in winter, along with Northern Harrier and other hawks. Areas of dense pine attract wintering Long-eared Owl and Northern Saw-whet Owl. Some other winter residents can be Northern Shrike, Lapland Longspur, and Snow Bunting.

Bald Eagle nests in the area, along with Trumpeter Swan, Hooded Merganser, Wild Turkey, Sandhill Crane, and Red-headed Woodpecker. Impoundments and woodlands make Killdeer Plains a good overall birding site for waterfowl from fall through spring and for shorebirds and songbirds in migration.

One of the best birding sites along Lake Erie, Metzger Marsh Wildlife Area is easily accessible from Highway 2 about 15 miles east of Toledo. A road runs through wetlands for 1.2 miles to dead-end at the lake; the shrubs alongside it can be full of warblers and other songbirds during spring migration.

Waterfowl, including swans, can be common here from fall through spring, and Bald Eagle can be seen throughout the year. Wading birds in summer include Great Egret, Snowy Egret, and Black-crowned Night-Heron. Shorebirds can be common in shallow spots during spring and fall.

This site on Lake Erie has gained legendary status for the birding excitement of spring migration. The boardwalk here attracts birders enjoying warblers and other migrants in great variety. An annual festival in May celebrates the seasonal abundance.

A trail at the Sportsmen’s Migratory Bird Center, on the way to the Marsh Boardwalk, can also be an excellent migrant walk. But anywhere in the area with a tree or shrub can be a good spot in May, as northbound birds stop to rest and feed before continuing their journey.

A road leads across the marsh for more than a mile to the Lake Erie shore. Swans and other waterfowl can be seen here from fall through spring, and summer residents include Wood Duck, Black-crowned Night-Heron and other wading birds, Bald Eagle, rails, Marsh Wren, and Prothonotary Warbler. Shorebirds can be common in spring and fall, and Yellow-headed Blackbird is seen occasionally.

The wetlands host many species of waterfowl in spring, and Wood Duck nests here. Osprey fly through in spring and fall, and Bald Eagle can be spotted year round. The marsh birds seen during migration or nesting season include Pied-billed Grebe, Black-crowned Night-Heron, Virginia Rail, Sora, Marsh Wren, and Common Yellowthroat. Terns hunt over the open water in spring and fall migration, and shorebirds can be found in the marsh and on the beach.

Like many other sites along the Lake Erie shore, Sheldon Marsh can be alive with migrant songbirds in late April and May, as birds reach the open water and stop to rest and feed before continuing their northward flight.

On the Lake Erie shore about 30 miles northeast of Cleveland, Headlands Beach State Park has a mile-long sand beach, dunes, and woodlands of cottonwoods and oaks. The location and habitats make this one of Ohio’s best birding sites from fall through spring. Birders also check adjacent Headland Dunes State Nature Preserve, a 25-acre protected area.

Waterfowl, including an occasional scoter or Long-tailed Duck, can reward lake scanning, as can loons, grebes, gulls, and terns. In migration, hawks and other birds follow the shoreline, and warbler watching can be excellent in woodland and scrub in spring. Shorebirds can be present in spring and fall where the beach is relatively undisturbed. Lapland Longspur and Snow Bunting might be found in winter.

Osprey is present from spring through fall and Bald Eagle is seen year round. Red-headed Woodpecker nests in the old cottonwoods.

The Oak Openings Preserve in the Toledo area spans more than 4,000 acres and protects an ecosystem of oak savannah with intermingled wetlands and sand dunes. More than 50 miles of trails crisscross it.

The habitats here have seen well over 200 species recorded. It’s a fine place for spring and fall songbird migration, but it’s also known for several nesting species that are unusual in this region.

Birders find Buck Creek State Park, just outside of Springfield, a great place to frequent, in large part because of adjacent C.J. Brown Reservoir. Together, the land habitats and lake have attracted a long list of nesting species, migrants, and rarities.

More than 20 species of waterfowl may be present on the reservoir in spring and fall migration, along with loons, grebes, and Osprey. The area can also have migrant shorebirds in the shallower northern parts of the lake and at the state park beach when it’s not thronged with visitors. Rare birds such as Red-necked Phalarope and Little Gull have been spotted.

This 360-acre green space in Columbus is very popular with birders during spring migration, when its woods can teem with songbirds. Founders in the 19th century saw the cemetery not just as a burial place but a “great Temple of Nature.”

Local birders maintain a kiosk with a list of recent sightings. Migration peaks in May, when flycatchers, vireos, thrushes, warblers, orioles, and other birds can create exciting “fallout” days under the right conditions.

But Green Lawn isn’t just a spring birding site. In fall migration or winter it can host uncommon to rare birds such as Northern Saw-whet Owl, Merlin, and even crossbills and Common Redpoll. Nesting birds include Cooper’s Hawk, Red-tailed Hawk, Great Horned Owl, and Eastern Bluebird.

Southern Ohio has several sites with good birding, including for nesting species that are uncommon elsewhere in the state. One place to seek them is the Nature Conservancy’s Edge of Appalachia Preserve. With almost 18,000 acres, it’s the state’s largest privately owned protected natural area.

If you continue east on Highway 125 you’ll arrive at Shawnee State Forest, another excellent area for spotting these species as well as general spring migrants. This is a large area with many secondary roads, so it’s good to visit the headquarters in West Portsmouth or go online to get a map before exploring.

Once a facility that processed nuclear-weapons materials, Fernald Preserve is now one of the area’s most popular sites for birding and other nature study. Located about 20 miles northwest of Cincinnati, it features trails throughout much of its 1,050 acres.

Ohio’s north coast offers great birding in the summer and year-round. This relatively new trail, organized into seven loops, will lead you to more than 80 prime sites in the counties bordering Lake Erie. Visit Cuyahoga Valley National Park in spring and summer to find Yellow-throated and Cerulean Warblers. Search marshy habitats in state wildlife areas and federal refuges for Bald Eagles and Common Gallinules. In the Oak Openings region, look for Red-headed Woodpeckers, Blue Grosbeaks, and Lark Sparrows. During spring migration you’re likely to see large concentrations of warblers in woodlots along the lake and flocks of shorebirds in the managed wetlands. —Kenn Kaufman