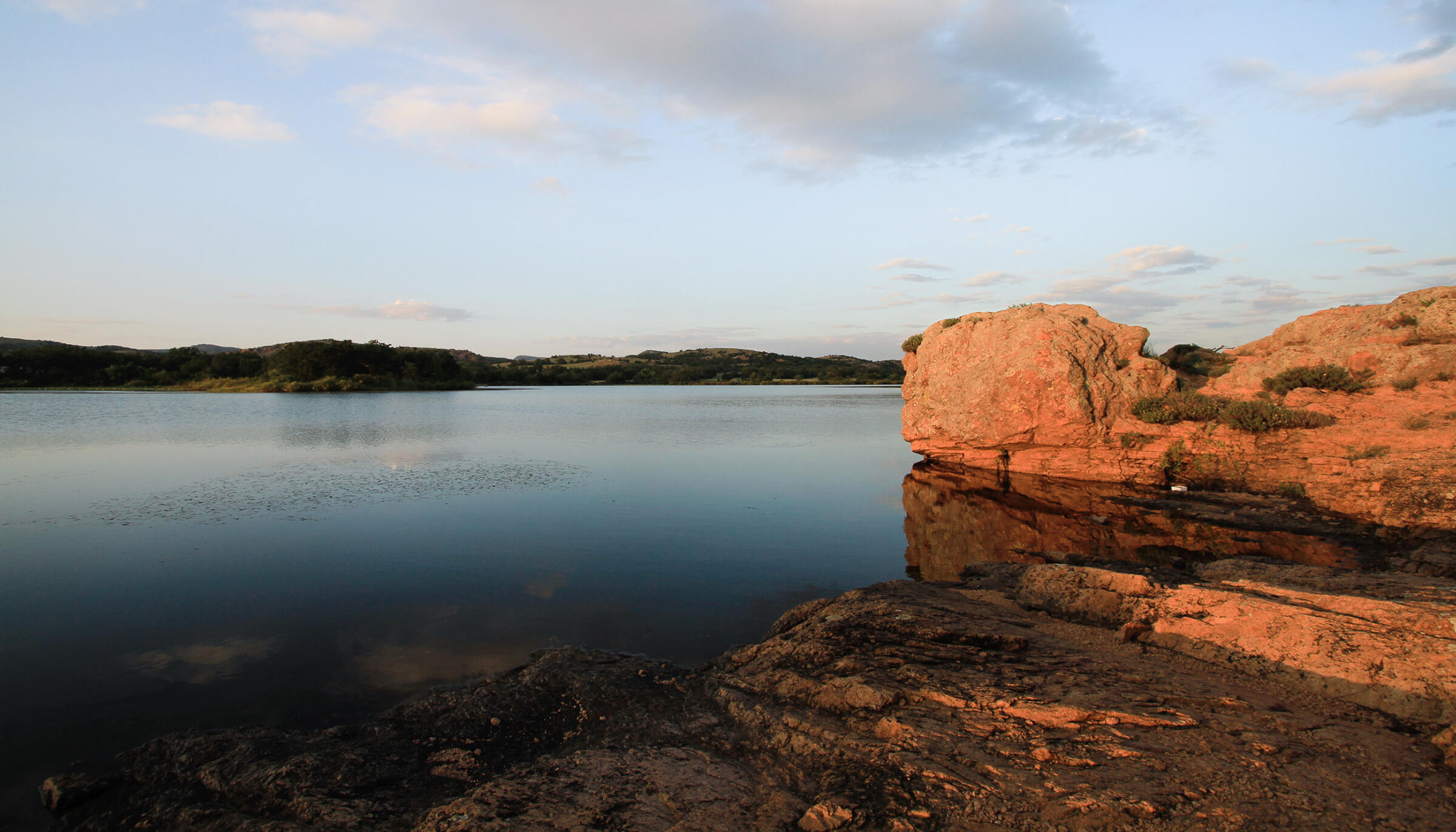 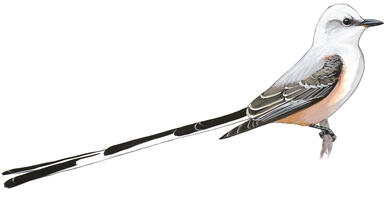 The southeastern and northwestern corners of Oklahoma are more than 530 miles apart. A quick look at birds occurring regularly at two corresponding sites shows the Sooner State truly spans the east and the west.

In between those extremes, Oklahoma encompasses habitat that includes varied wetlands, bottomland hardwoods, the granite uplands of the Wichita Mountains, and one of the finest expanses of tallgrass prairie remaining in North America. Add it all up, and Oklahoma offers some of the best birding in the central United States.

This relatively new site (dating from the 1990s) has become one of the premier birding destinations in the region, with a bird list of well over 300 species. Red Slough’s 5,814 acres have been extensively managed to restore wetlands and re-establish bottomland hardwood forest, and the result is a rich environment with varied birdlife.

The main entry is via Red Slough Road (called Mudline Road on some maps) north from Highway 87, about 3.2 miles east of Highway 259. Once in the area, walk the graveled levee roads off Red Slough Road into the reservoir areas. Because of hunting season, visits are discouraged from November through January.

Wood Stork and Roseate Spoonbill appear in late summer, and Bald Eagle is present from fall through spring. Northern Harrier and Short-eared Owl hunt the grasslands in winter, and Peregrine Falcon appears in spring and fall.

Tishomingo centers on 4,000-acre Cumberland Pool, an arm of Lake Texoma less than 20 miles from the Texas state line. Various waterbirds make up a birding highlight here, but there’s much more to the refuge, as well.Waterfowl can be abundant in Cumberland Pool from fall through spring, especially dabbling ducks such as Gadwall, Mallard, and Northern Shoveler. Snow Goose and Canada Goose feed in fields around the refuge, and Bald Eagle perches on lakeside trees from fall through spring. In areas of the pool with low water or mudflats, wading birds can be seen from spring through fall and shorebirds can be common in migration. Roseate Spoonbill appears occasionally in August and September.

There’s an observation platform on the north side of Cumberland Pool near the refuge headquarters and a lookout at Nida Point on the southeast side, reached off Highway 22. The refuge also has other observation points accessed by perimeter roads.

A huge salt flat and shallow lake are the heart of this 32,197-acre refuge in north-central Oklahoma. The landscape appears otherworldly and barren, but a wide variety of birds are right at home here.

Vast flocks of American White Pelican pass through in spring and fall. Sandhill Crane winters in large numbers, and the rare Whooping Crane sometimes stops during migration. On the west side of the lake is a unique area where crystals grow in the soil, and it’s here that American Avocet, Snowy Plover, and Least Tern nest—they’re sometimes visible from an observation tower. Ralstin Island, in the middle of the lake, has thousands of nesting birds such as Double-crested Cormorant, Snowy Egret, Tricolored Heron, and White-faced Ibis.

A wildlife drive and several walking trails allow birders to view flocks of waterfowl that winter on the refuge, as well as shorebirds that pause here in spring and fall migration. Bald Eagle is present mostly from fall through spring. Birds that nest in the refuge include Wild Turkey, Mississippi Kite, Black-necked Stilt, Greater Roadrunner, Western Kingbird, Scissor-tailed Flycatcher, Painted Bunting, and Dickcissel.

Because of the size of the refuge and the various entry points, it’s a good idea to stop at the visitor center for maps and up-to-date birding information.

Tulsa’s Mohawk Park is so large that it encompasses a golf course and zoo, but parts of it offer fine birding opportunities. Newcomers should head first for the Mary K. Oxley Nature Center for a park map and advice. Several trails at the center provide access to wetlands, grassland, and woodland, making it a good birding destination on its own. A boardwalk at Blackbird Marsh leads to Lake Sherry and an observation tower.

On the west side of the park, Lake Yahola attracts wintering waterfowl and, often, rarities such as scoters, Long-tailed Duck, and rare gulls. Bonaparte’s Gull and Franklin’s Gull regularly migrate through. Common Loon, grebes, and American White Pelican are likely visitors from fall through spring. When water levels are low, Lake Yahola can also be good for shorebirds.

Even without the prime birding, the Tallgrass Prairie Preserve would be worth visiting as a virtual trip back in time. This 39,000-acre tract north of Pawhuska lets visitors imagine the era when 140 million acres of tallgrass prairie stretched across the middle of North America, providing a home to bison, elk, wolves, bears, and countless other species.

Bison have been reintroduced here and now number more than 2,500. The booming of Greater Prairie-Chicken sounds across the grassland in spring, as does the chittering of Scissor-tailed Flycatcher and the Dickcissel singing its own name. Other nesting birds here include Northern Bobwhite, Wild Turkey, Upland Sandpiper, Loggerhead Shrike, Bell’s Vireo, Grasshopper Sparrow, Henslow’s Sparrow, and Painted Bunting. In winter, the prairie can host Northern Harrier, Rough-legged Hawk, Short-eared Owl, and Smith’s Longspur. Sprague’s Pipit sometimes visits during spring migration.

The preserve is a big place with miles of roads. Stop by the visitor center to learn about prairie ecology, pick up a map, and get birding advice. You can also download a general map and trail map from the website.

On the extreme western end of Oklahoma’s Panhandle, a mesa of volcanic origin rises as the state’s high point, elevation 4,973 feet. Black Mesa is named for the lava that has protected it from erosion for million of years. It is home to many plants and animals that are rare in the rest of the state.

It’s a four-mile, fairly strenuous hike to the top of Black Mesa; be prepared with water and sun protection. Birds found here include many of those mentioned as well as Pinyon Jay (scarce), Western Scrub-Jay, Black-billed Magpie, Rock Wren, and Rufous-crowned Sparrow. In winter, Black Mesa may have Steller’s Jay, Mountain Bluebird, and Townsend’s Solitaire.

A visit to Black Mesa State Park, nine miles south, may bring sightings of Mississippi Kite, Red-headed Woodpecker, Blue Grosbeak, Orchard Oriole, Bullock’s Oriole, and, depending on the water level of the park’s lake, waterbirds from ducks and herons to gulls. The habitats here will add to the bird list of a trip to the region.

In the 1990s, Oklahoma began a project to restore a large wetland in the southwestern part of the state that had been partially drained for agriculture. Now Hackberry Flat encompasses more than 7,000 acres of managed wetlands that attract tens of thousands of birds annually, with a cumulative bird list of more than 225.

The area, southeast of Frederick, comprises several units that are linked by a driving tour. You can find a map at the site or on Hackberry Flat’s web page. Birders can also walk dikes between impoundments for closer views of flocks of waterfowl. Large numbers of dabbling ducks are here year round, with the best viewing in February and March.

Hackberry Flat is famed for shorebirds, with more than 30 species recorded. March through May is the best birding, although August is also good. Black-necked Stilt, American Avocet, Snowy Plover, and Wilson’s Phalarope nest here. Wading birds such as American Bittern, Snowy Egret, Black-crowned Night-Heron, and White-faced Ibis can be seen from spring through fall. King Rail and Sora nest, and American White Pelican can be seen much of the year. Flocks of Sandhill Crane winter in the area.

Lake Hefner is known to local Oklahoma City birders as a place to see waterfowl, loons, grebes, shorebirds, gulls, and terns. Many rare species have turned up here over the years, as the lake gets good coverage.

Just about every duck of the Midwest can be spotted here from fall through spring, along with the occasional oddity such as Cinnamon Teal or Surf Scoter. Red-throated Loon, Pacific Loon, and Yellow-billed Loon have been seen, though of course Common Loon is most common. Birders observe American White Pelican regularly and Osprey in the spring and fall.

In areas along the southern shore where the water level exposes mudflats or shallow water, shorebirds can be found in spring and fall. Lake Hefner is also known for gulls. Franklin’s Gull is common in migration and rarities such as Little Gull and Iceland Gull have appeared in winter. Lakeshore Park is a favored lookout site for waterbirds.

Less than five miles southwest, Lake Overholser offers similar birding, concentrating on waterbirds from fall through spring. Parks and lookout areas ring the lake, allowing for the best light on waterbirds depending on time of day. Overholser is not as deep as Hefner, so has fewer diving birds such as loons, and may have better shorebird habitat.

The biggest wintering flocks of Snow Geese in the state turn the fields of this national wildlife refuge white. Located in eastern Oklahoma, at the confluence of the Arkansas and Canadian rivers, the 20,800-acre Sequoyah offers fine birding for both waterbirds and land species.

Winter waterfowl are an attraction here, including flocks of Mallards and other dabbling ducks. Wading birds and shorebirds can be found where the water level is suitable, and Least Tern nests locally on sand bars when the rivers expose habitat. Several Bald Eagle nests can be found on the refuge.

Striking rock formations of reddish granite, impressive wildlife viewing, and stellar birding are attractions at this 59,000-acre refuge in southwestern Oklahoma. Wichita Mountains was the site of bison reintroduction as far back as 1907, and it has also seen reintroductions of elk, prairie dogs, and otters.

The best-known resident bird is the endangered Black-capped Vireo, present at the refuge from April through August. The Elk Mountain Trail and the area around the Quanah Parker Lake dam are good places to look for it.

Around 20,000 acres of the refuge are mixed-grass prairie, surrounding the granite uplands and oak forests. Several lakes are scattered throughout the area as well; waterfowl alight there from fall through spring.

Sixteen hiking trails snake through the refuge for more than 30 miles, providing access to varied habitats. A special publication called “Birding Sites for Beginners” guides newcomers to some of the better locations around the area.

Comprising 13 separate loops in Oklahoma’s western half, the trail calls for weeks of exploration. Prepare to be surprised by the diversity of landscapes and their associated birds. Flocks of blue-gray pinyon jays swarm across the slopes in the far west’s rugged Black Mesa country; elusive black-capped vireos and rufous-crowned sparrows chatter from thickets in the southwestern Wichita Mountains; and snowy plovers and stately American avocets parade across the glistening flats of the Great Salt Plains. During spring and fall, clouds of Franklin’s gulls circle over the fields en route to or from the northern prairies. Winter flocks of bold Harris’s sparrows, black-faced and pink-billed, swarm through the riverside thickets. Come anytime in the warmer months and you’ll be greeted by Oklahoma’s state bird, the gorgeous scissor-tailed ycatcher, pale with salmon-pink tinges and streaming tail feathers. Summer is also the time for Mississippi kites, graceful acrobatic raptors that are perhaps more numerous here than anywhere else, wheeling and diving above cottonwood groves on the plains. —Kenn Kaufman