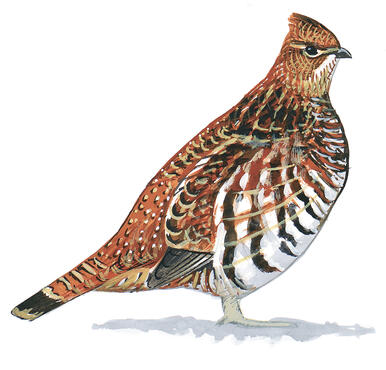 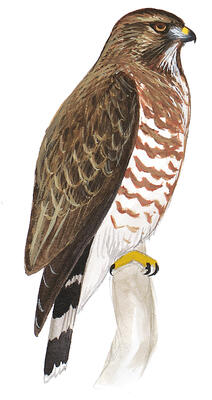 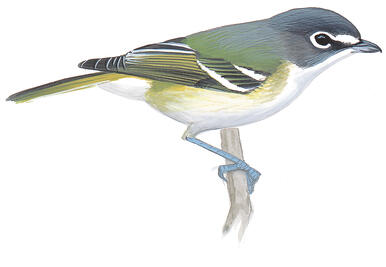 Pennsylvania has the sixth-largest population of the United States, but most of those people are concentrated in the east and west. There’s still plenty of forest in between (more than half the state’s total area), as evidenced by an estimated black bear population of 18,000.

Several of the Keystone State’s top birding sites are located in the sprawling central part of the state, where farmland meets the Appalachian Mountains and state forests and parks, including Bald Eagle State Park. But many productive locations can be found in urban areas as well, such as the steep valleys and wooded slopes of Frick Park in Pittsburgh and along the Delaware River near Philadelphia.

The state’s 43-mile Lake Erie shoreline, in the northwest corner, acts as a magnet for both waterbirds and migrants. There, Presque Isle State Park has racked up the highest species number of the state’s total of 430. Hawk Mountain Sanctuary along the Appalachian flyway, meanwhile, is a renowned site for observing migrating raptors, with thousands passing through each fall.

Just a mile from Philadelphia’s international airport, Tinicum has plenty to please any birder, beginning or expert. Wetlands are the main focus here, including a 145-acre managed impoundment and the largest freshwater tidal marsh in the region.

The wetland habitat attracts migratory and wintering waterfowl, nesting wading and marsh birds, and impressive shorebird numbers in fall. But the refuge also has woodland and scrubby areas, making it a magnet for migrating songbirds in this heavily urbanized landscape.

Even more than most national wildlife refuges, Tinicum has an excellent visitor center and interpretive and educational programs, offering visitors the opportunity to understand more of what they see here.

This state park lies along the shore of 17,088-acre Pymatuning Reservoir, which itself lies on the Ohio state line in northwestern Pennsylvania. The combination of lake, ponds, and woods gives this area one of the longest species lists of any site in the state.

Waterfowl gather here from fall through spring and can be seen from viewpoints around the shoreline, including near the spillway on Hartstown Road. Miller Ponds, in the wildlife management area east of Hartstown Road, is another good spot for waterfowl. Sandhill Crane, Savannah Sparrow, Indigo Bunting, and Bobolink can be seen as well.

When the Bald Eagle had disappeared from Pennsylvania because of DDT and persecution by humans, Pymatuning had the only breeding pairs in the state. Bald Eagle nests can still be seen from Hartstown Road and from lookout points off West Lake Road at the far southern end of the lake near Jamestown.

Enormous flocks of Snow Geese, transforming fields and wetlands into a blanket of white, have been the highlight of this area for many years. Increasingly mixed with them are large numbers of Tundra Swans, present mainly from November to April.

Located about 15 miles west of Reading, Middle Creek has a visitor center open from February 1 to Thanksgiving. A driving tour, open from about March to mid-September, circles Middle Creek Reservoir, passing observation points and walking trails. The lake is quite shallow, so it’s most attractive to dabbling ducks, not divers. Osprey and Bald Eagle nest here.

Despite its singularly focused name, Bald Eagle State Park has one of the highest bird species lists of any Pennsylvania site. Birders will find a combination of waterbirds on the park’s 1,700-acre lake, interesting nesting birds, and excellent migrant watching in the surrounding hardwood forest and fields.

The main park facilities are located on the north shore of the lake off Highway 150. Roads and trails wind through the area, offering the chance to scan the lake for waterfowl, loons, grebes, gulls, and terns. Birds such as Tundra Swan, Long-tailed Duck, Red-breasted Merganser, and Red-necked Grebe can appear during spring migration. There are also viewing areas and boat ramps off Highway 150 west of the main park entrance road that offer a vantage of the lake. True to the park’s name, Bald Eagle can be seen year round, and Osprey from spring through fall.

The dense forests of northern Pennsylvania are home to nesting birds associated with northern climes. Forests of northern hardwoods, hemlock, and white pine can in places inspire visitors to imagine what much of this region looked like a century ago.

This 1,500-acre park boasts a very high species list, thanks to both the 350-acre reservoir at its center and varied habitats of hardwood forest, pine forest, and open fields. The nature center at the eastern end of the park has a bookstore and offers many programs and field trips. Fourteen miles of trails pass through woods and fields.

At times, 20 or more species of ducks can be present on the reservoir from fall through spring, along with Common Loon, Pied-billed Grebe, Horned Grebe, and Red-throated Grebe. Osprey is here from spring through fall and Bald Eagle is seen year round.

Set in the heart of Bucks County, Peace Valley Park gets good coverage from local birders, which has resulted in the recording of many rarities, such as Tricolored Heron, Mississippi Kite, Purple Sandpiper, and Redwing (a European thrush).

Hawk Mountain Sanctuary was established in 1934 as the world’s first protected area for birds of prey. Before that, gunners stood on this Appalachian ridge each autumn and shot raptors by the thousands. Conservationists finally leased the land and hired a warden to stop the slaughter.

Today, the independently run Hawk Mountain Sanctuary is one of America’s most famous and popular birding destinations, where, instead of shotguns, visitors point binoculars and spotting scopes at Ospreys, hawks, eagles, and falcons. The sanctuary’s visitor center is open year round and has exhibits, programs, and a bookstore.

The main raptor migration begins in August and continues into December. That’s when hawks moving south follow ridgelines and stream by the sanctuary, averaging a count of 18,000 annually. The peak time for each species varies: Go in September to see Broad-winged Hawk and Bald Eagle and November and December to see Rough-legged Hawk. The stretch from September to early November generally logs the most raptors. Broad-winged Hawk, Sharp-shinned Hawk, and Red-tailed Hawk are most common, but numbers of Golden Eagle and Northern Goshawk are particularly noteworthy.

Just north of Reading, Lake Ontelaunee is one of the best places in the region to look for a variety of waterfowl and other waterbirds. The 1,082-acre reservoir also has seen more than its share of rare birds.

The area around the dam on Highway 73 is one good observation point. Winter and early spring bring flocks of Snow Goose and dabbling ducks such as Gadwall, American Wigeon, Mallard, and Northern Pintail, as well as Ring-necked Duck and mergansers. Look also for Common Loon, Pied-billed Grebe, and Horned Grebe. Unusual species such as scoters and Red-throated Loon are possible from fall through spring.

Osprey can be seen during migration and Bald Eagle nests in the area. Most gulls are Ring-billed and Herring but many unusual species have also shown up. Bonaparte’s Gull is most common in April.

For other viewpoints go east of the dam on Highway 73, at the end of Water Street west off Maidencreek Road (east side), and at the closed bridge on West Shore Drive (west side). The area where Maidencreek Road crosses Peters Creek is a popular birding spot for land birding, with parking areas and trails. Ponds here can be good for waterbirds.

For a popular birdwalk, follow the Waterfowl Observatory Trail in the main park recreation area. In migration periods and/or winter, possible species on the lake include Tundra Swan, 15 or more species of ducks, Common Loon, Pied-billed Grebe, Horned Grebe, gulls, and terns. When the recreation area and swimming beach are not too busy, the shore here can be good for migrant shorebirds. Bald Eagle might be seen year round. Views of the lake are also possible from the boat launch on Highway 259 and at the north ends of Campground Road and Hoffman Road to the west.

With the highest total species count of any Pennsylvania site, Presque Isle boasts regional honors, but it’s in fact one of the best and most exciting places to bird in the United States. Not only is it located on the shoreline of Lake Erie, but its topography also makes it especially attractive to migrants.

Presque Isle is a seven-mile-long peninsula stretching into Lake Erie from the city of Erie. In spring, migrant birds following the shore travel the length of the peninsula and are “trapped” at the end when they find themselves nearly surrounded by water. Those spring concentrations can make for great birding days. In the fall, the reverse works in birders’ favor: Birds traveling south across the lake see Presque Isle as their first landfall and home in on it.

Presque Isle’s beaches and marshes attract shorebirds and wading birds, and in winter the lake and bay host all manner of waterfowl, loons, grebes, and gulls. A very long list of rarities is associated with the park, including Harlequin Duck, Wood Stork, and Kirtland’s Warbler. In May, at the height of spring migration, Presque Isle Audubon sponsors a very popular Festival of the Birds, with field trips and nationally known speakers.

Developed by Audubon Pennsylvania, this ambitious trail is centered on the mighty Susquehanna River but it spreads out to take in more than 200 sites in 39 counties, with detailed directions and bird-finding information. Much of central Pennsylvania is covered with extensive and magnificent forestland, a stronghold for such spectacular birds as richly hued scarlet tanagers, flashy rose-breasted grosbeaks, and big, bold pileated woodpeckers. Ridges that run from northeast to southwest through Pennsylvania serve as a migratory route for birds of prey in fall, and this trail will lead you to some of the best vantage points, such as the world-famous Hawk Mountain Sanctuary. Hit this ridge on the right day in fall and you might see sharp-shinned hawks by the hundreds or broad-winged hawks by the thousands sailing by on updrafts from the valleys below. Of course, many water birds follow the Susquehanna itself during migration, stopping over on the river or on nearby marshes and lakes. Shorebirds, gulls, terns, herons, and egrets are all regular visitors. Great noisy flights of tundra swans furnish a major annual spectacle here in late fall and early spring as they follow the river to and from wintering grounds on Chesapeake Bay. —Kenn Kaufman