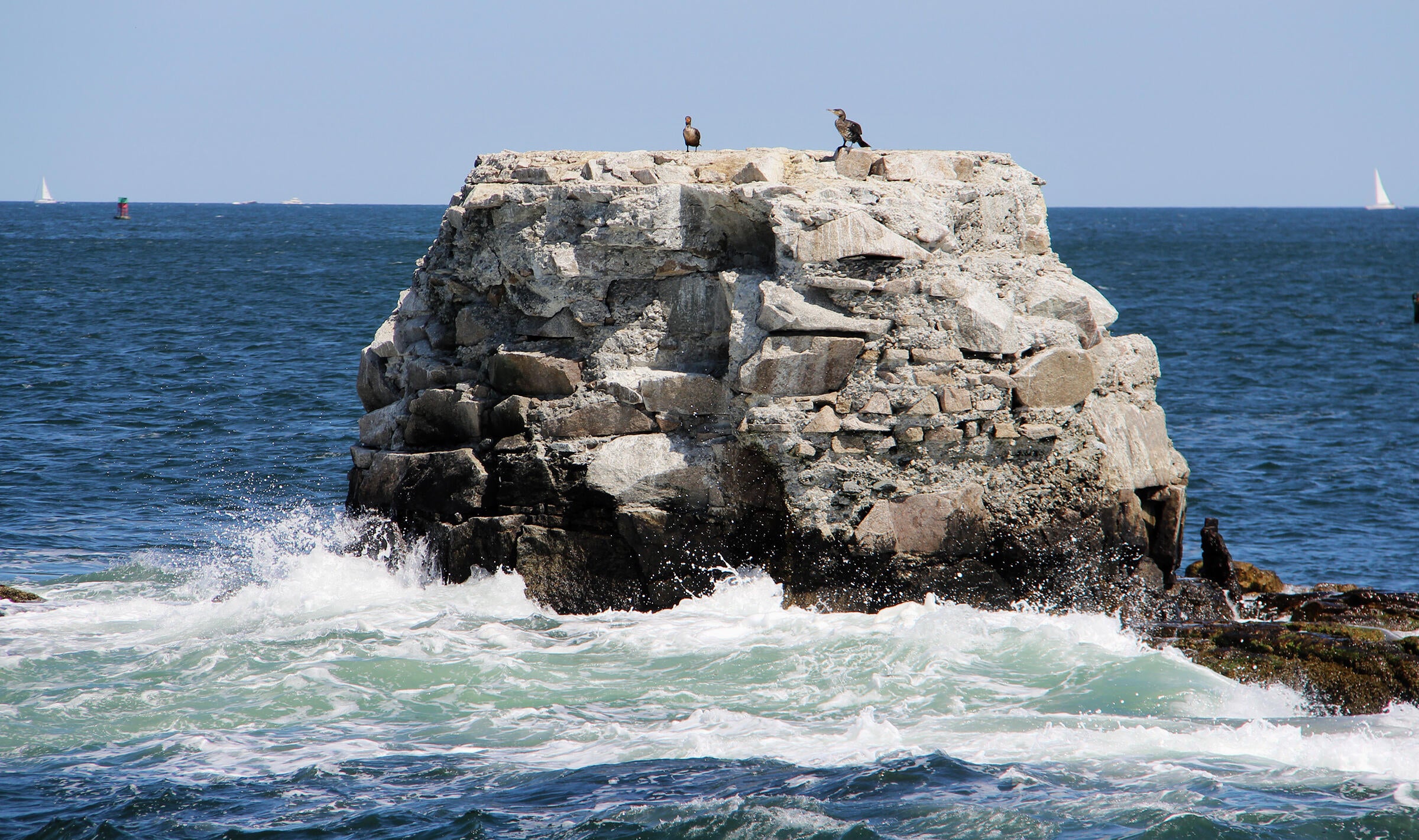 Cormorants standing on the remains of the 1882 Whale Rock Lighthouse at the entrance to the west passage of Narragansett Bay, Rhode Island. Photo: Flickr CC (CC BY-NC 2.0)

The smallest of all states packs a punch with more than 40 miles of coastline chockablock with birds.

Rhode Island, the tiniest of all the United States, makes up in birding destinations what it lacks in size. The best lie along the state’s Atlantic coastline, where beach and marsh meet open water and birders scan for seabirds flying offshore.

Though Rhode Island’s coast stretches only 41 miles east to west as the crow flies, its many bays and islands add up to nearly 10 times that amount of shoreline. The site with the second-highest number of recorded species in the state, Trustom Pond National Wildlife Refuge, combines coastal wetlands with scrubby fields and woodlands, attracting both waterbirds and migrant songbirds.

Arguably the most famous birding location in Rhode Island—and the one with the longest species list—lies about 10 miles off the mainland. Block Island is irresistible to birders in the fall, when migrants always include rare vagrants such as the Cave Swallow and Fork-tailed Flycatcher. Birders would be well advised to fall out there, just as more than 70 species of songbirds do.

Located in part on a former military airfield, Ninigret National Wildlife Refuge encompasses woodland, shrubby fields, grassland, freshwater ponds, and the large coastal saltwater lagoon called Ninigret Pond. Four miles of trails allow access to all these habitats. Ninigret’s varied habitats are its strength, since a diversity of land and water species can be found in migration and winter.

The refuge Kettle Pond Visitor Center is just north of Highway 1 in Charlestown, although most of the area is located on the south side of the highway. Stop at the visitor center to get trail maps and learn of the different access points to the refuge. There are also nature trails here.

Around the former airfield to the south, the west entrance accesses woodland and the shrubby areas near what were runways, as well as Foster Cove, an islet off Ninigret Pond. The eastern entrance, south off Highway 1A, reaches a trail that leads to the shore of Ninigret Pond and to an observation platform at Grassy Point.

Ninigret’s wetlands and salt pond shoreline can have a selection of waterfowl in winter and shorebirds in spring and fall. Green Heron, Osprey, Piping Plover, Willet, Least Tern, and Common Tern in or near the refuge. Some other refuge nesting birds are Cedar Waxwing, Blue-winged Warbler, American Redstart, and Prairie Warbler.

Established by a bequest in 1949 “for the propagation, preservation, and protection of birds,” the Norman Bird Sanctuary has since served as a pleasant site to explore, with woodland, marsh, pond, rocky bluffs, and fields hosting a good variety of birds, especially in migration.

A small fee is charged to walk the seven miles of trails through 325 attractive acres with a view of Sachuest Bay and the Atlantic. The sanctuary offers guided bird walks every other Sunday.

Well over 200 species have been recorded here, and the site’s location along the coast brings migrant raptors, shorebirds, and songbirds, especially with north winds in fall.

Covering 3,350 acres, this area west of Narragansett protects an important swamp habitat with Atlantic white-cedar, maple, and holly, one of the best and largest of its kind in New England.

A five-mile loop trail winds through forest and past wetlands to Worden Pond, a glacier-formed lake. More than 200 species of birds have been recorded here. Wetlands host a variety of waterfowl and wading birds in migration.

Hunting is allowed here, so visitors should be aware of seasons and restrictions on visiting.

The 787 acres of this national wildlife refuge encompass Trustom Pond, a saltwater lagoon separated from Block Island Sound by a barrier beach, as well as forest, fields, and freshwater ponds. It’s certainly one of Rhode Island’s best all-around birding destinations.

Volunteers staff a visitor station on Matunuck Schoolhouse Road, and from that point several miles of trails wind south through the refuge. Four viewing platforms are located at productive sites along the way.

Ask at the visitor contact station about the barrier beach section of the refuge. Part of this area is closed in nesting season to protect Piping Plover and Least Tern, but open sections offer views of shorebirds as well as gulls, terns, and various seabirds.

One of the most beautiful and sought-after of all waterfowl, Harlequin Duck, is common at this coastal refuge from November into April. It’s become for birders the virtual symbol of Sachuest Point.

The national wildlife refuge covers 242 acres of a peninsula on the coast just east of Newport. Trails lead around the rocky shoreline, offering viewpoints to scan the sea from fall through spring for Common Eider, Harlequin Duck, scoters, loons, grebes, Northern Gannet, Great Cormorant, Razorbill, and gulls. Purple Sandpiper feeds on the rocks from late November to May. Birders watch for rarities such as Barrow’s Goldeneye, Dovekie, and Black-legged Kittiwake.

On shore, look in winter for Northern Harrier, Snowy Owl, Short-eared Owl, Horned Lark, and Snow Bunting. Like many coastal points, Sachuest has seen its share of vagrants, such as Western Kingbird and Yellow-throated Warbler.

At the parking lot for Third Beach, there’s access to a salt marsh where Saltmarsh Sparrow nests. Sachuest Point’s rocky shores and sandy beaches (when they aren’t crowded with sunbathers) host migrant shorebirds.

Fall migration on Block Island isn’t just a birding spectacle, it’s a social event. A ferry ride to this small island eleven miles off the coast is a tradition for many New England birders from September through mid-October.

Southbound migrating birds often fly past the coastline and find themselves surrounded by the Atlantic Ocean. Spotting Block Island, they home in on it to rest and feed. The result can be thousands of birds of dozens of species congregating on this island of less than ten square miles.

Part of the northern section of Block Island is a national wildlife refuge, but birders often walk or bicycle over the entire island searching for migrant flocks. Residents are used to tourists at this popular vacation destination, but it’s still important to respect privacy and property restrictions.

Practically anything can show up here in fall, from tiny Ruby-crowned Kinglets to the Peregrine Falcons that search for prey among the masses of birds. And ,of course, bird lists are augmented by waterfowl, loons, shorebirds, and gulls around the island’s coast. Many vagrants have shown up here, such as Say’s Phoebe, Cave Swallow, and Northern Wheatear.

Rhode Islanders have heard every cliche about their state’s small size, but they know they can find big numbers of birds without venturing beyond their borders. This trail features seven prime sites, including two National Wildlife Refuges, as well as a number of parks and wildlife management areas. In salt marshes near the beach, seaside sparrows and clapper rails are among the prized finds for keen birders, and even a casual observer can appreciate the northern harriers that might be seen in low, slow flight as they hunt over the coastal marshes at any time of year. Along the shoreline the birding may be at its best in winter. On rocky headlands you might spot the dark silhouettes of so-called purple sandpipers, while gulls of several species wheel overhead. Just off the coast you’ll enjoy wintering flocks of common eiders, big hardy sea-ducks famed for the insulating properties of their down feathers. Not so famous but also present are other kinds of seafaring ducks, such as white-winged scoters and common mergansers, while clusters of black-and-white patterned long-tailed ducks may be on display flying farther offshore. Travel this trail and experience its birds and you’ll agree that good things do come in small packages. —Kenn Kaufman