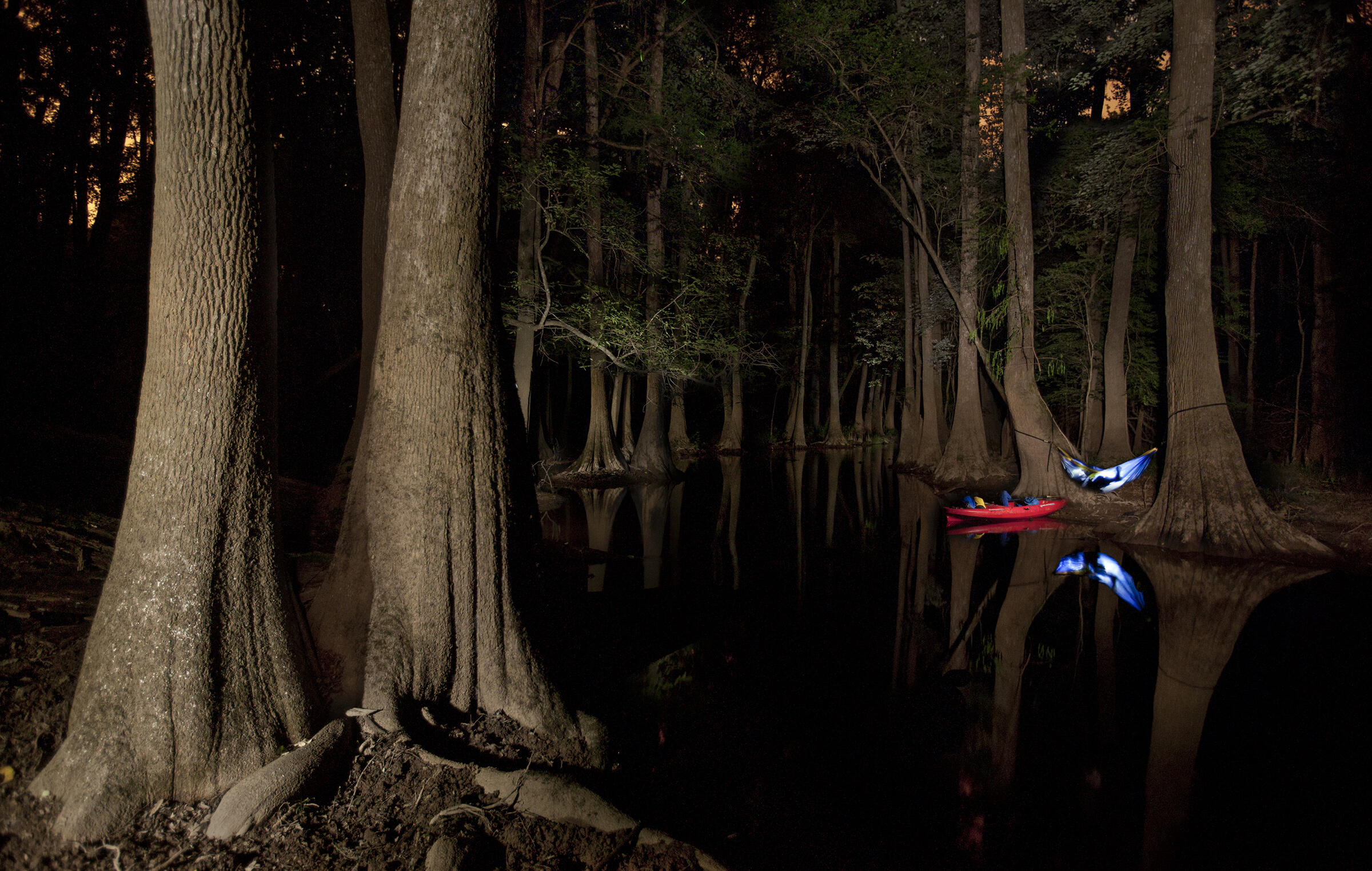 From the mountains to the sea, South Carolina provides strikingly different habitats in a small amount of space, making for great birding trips.

Like the adjacent Carolina to its north, South Carolina encompasses Atlantic coastal habitats and Appalachian highlands—just in a more compact area. The result is a state species list of more than 430 that ranges from the seagoing Northern Gannet to the mountain-loving Common Raven.

There’s plenty of tourist development along the South Carolina coast, including Hilton Head Island and Myrtle Beach, but there’s also lots of wild, birdy habitat in parks and wildlife refuges. For many people, major highlights of the state’s natural history are protected areas of southern bottomland hardwood and bald-cypress swamp, such as Congaree National Park and Francis Beidler Forest Audubon Center and Sanctuary.

In the Francis Marion National Forest and other pinewoods areas, birders can find the endangered Red-cockaded Woodpecker and the sometimes-elusive Bachman’s Sparrow (which was, in fact, named for the Rev. John Bachman of Charleston, a naturalist who befriended and collaborated with John James Audubon).

All in all, South Carolina offers a fine variety of habitat and birdlife in a state small enough to hit many high points in a single weekend, making it a superb destination.

This beautiful, oceanside state park, which boasts a bird list far exceeding 300 species, is one of South Carolina’s best birding destinations. It offers a great mix of nesting birds, shorebirds, seabirds, and migrants. It’s also extremely popular with beachgoers in summer, so nearly all birding happens from September through May.

Drop by the park’s education center for a bird checklist, and then explore the grounds via nature trails, a marsh boardwalk, and around three miles of sandy beach. From fall to spring, dabbling and diving ducks rest in the marsh and freshwater lagoon, while scoters, Red-throated Loon, and Common Loon can be seen in the Atlantic. The beach hosts shorebirds, gulls, and terns year round. In winter, many birders walk 1.2 miles north along the beach to the Murrells Inlet jetty for Purple Sandpiper, hoping to see a Harlequin Duck, jaeger, or Razorbill along the way.

Located across the Savannah River from Savannah, Georgia, Savannah National Wildlife Refuge comprises 29,175 acres of freshwater marsh, tidal river, and bottomland hardwoods. The refuge’s 3,000 acres of freshwater impoundments combine history and wildlife: They date back to the plantation era, when they were built as diked rice fields.

The refuge has a fine visitor center on Highway 17, three miles from the start of the Laurel Hill Wildlife Drive. The four-mile route, south of Highway 170, winds through freshwater pools and hardwood forest, providing easy access to great birding. In addition, visitors can walk most dikes between the ponds to get closer to birds. Alligators are seen often, except in winter.

One of America’s great wild places, this sanctuary protects the world's largest virgin bald-cypress and tupelo swamp forest, which is itself part of a larger area called Four Holes Swamp. Some of the trees in the 1,800-acre central forest are 1,000 years old. The entire preserve covers 17,000 acres.

Such swamp forests are impressive, even awe-inspiring, but almost always hard to access without a boat. Here, a 1.75-mile boardwalk makes exploration easy, winding deep into this now-rare ecosystem. The visitor center also offers regular bird walks and canoe and kayak trips, among other activities.

The “who cooks for you?” of the Barred Owl and the “sweet-sweet-sweet-sweet” of Prothonotary Warbler are signature sounds of the swamp. Other birds of this habitat include Red-shouldered Hawk, Yellow-crowned Night-Heron, White Ibis, Mississippi Kite, Pileated Woodpecker, Swainson’s Warbler, Hooded Warbler, Northern Parula, and Yellow-throated Warbler. With some luck, visitors might see Wood Stork, Anhinga, or Swallow-tailed Kite.

Impressive flocks of wading birds first capture a Bear Island visitor’s attention, as a dozen species or more may be present in its wetlands. But this site in South Carolina’s Low Country has much more to offer birders than just these long-legged species.

Wood Stork can be seen more or less throughout the year, as can Mottled Duck, Anhinga, American White Pelican, and Bald Eagle. Shorebirds are abundant—around 20 species appear commonly and many more drop by regularly. Waterfowl, including Tundra Swan, hang around from fall through spring.

This is a popular hunting area, and it’s closed to visitation from November to early February. Most birders drive Titi Road into the area and walk side roads and levees. There are two observation platforms as well.

Set along the Congaree River, about 20 miles southeast of Columbia, Congaree National Park protects the largest tract of old-growth floodplain forest still intact in the region. The terrain makes access difficult, so much of the tract escaped logging. Some of the trees growing here are among the tallest in the United States, giving the woodland a truly majestic and primeval atmosphere.

Several trails wind through the park, but the one that draws the most visitors is the 2.4-mile boardwalk loop into the heart of the bottomland forest, past bald-cypress, tupelo, oak, loblolly pine, maple, and holly trees. All trails start at the visitor center, where birders can get trail maps and ask for advice. The Weston Lake trail, for instance, is often good for seeing wading birds.

There’s excellent birding at this 13,000-acre refuge on the north shore of Lake Marion, South Carolina’s largest lake. Visiting isn’t as straightforward as at some national wildlife refuges because Santee consists of four separate units. All units are located within a span of 10 miles, though, so it’s easy to travel among them.

The refuge visitor center is located just minutes off Interstate 95 in the Bluff Unit. Stop here to get maps and advice (some areas are closed in winter to protect waterfowl). The Bluff Unit has a one-mile nature trail and an observation tower. Just across I-95 sits Dingle Pond, with another trail, a wetland boardwalk, and an observation tower. You can access the Pine Island Unit by walking trail only. The Cuddo Unit, on the other hand, features a 7.5-mile wildlife drive and several hiking trails.

The birding focus changes with the seasons. Fall through spring delivers abundant waterfowl species. Bald Eagle nests in late winter; look for it around the lake. Sandhill Crane appears in winter at the Bluff Unit. Wading birds are present year round, but late summer brings post-breeding flocks and Wood Stork. Osprey nests can also be seen throughout the year.

Huge longleaf pines once covered millions of acres of the Southeast, but most of the habitat has been lost to logging and development. The Sandhills area of the Carolinas was at one time—and to some extent still is—an important part of this ecosystem, which features open forest with wiregrass understory.

Carolina Sandhills National Wildlife Refuge protects 47,850 acres of habitat, including a large area of recovering longleaf pine forest. Birders here focus on the endangered Red-cockaded Woodpecker, which nests only in mature pines. These birds are common in the refuge but not always easy to find. It helps to know their call. Refuge staff mark roost trees with white bands and ask visitors to stay 200 feet away while observing the birds. They usually roost at dawn and dusk and spend the day foraging over a wider area.

The refuge wildlife drive accesses not only longleaf pine habitat but fields and ponds, as well as several hiking trails, observation towers, and a photo blind.

The Sewee Visitor and Environmental Education Center, located on Highway 17 about 18 miles north of Charleston, helps visitors explore the area. The center also has information about nearby Cape Romain National Wildlife Refuge, most of which has limited public access.

A favorite birding spot for many of these lies less than three miles from the visitor center: I’on Swamp Interpretive Trail passes through an area used for agriculture back in the antebellum days of the wealthy “rice lords” of the Low Country. For another good site seek out the South Tibwin Hiking Trail system, located on Highway 17 about 1.5 miles north of the Sewee visitor center. Birds found here include Wood Stork and other wading birds, Osprey, Clapper Rail, shorebirds, and Painted Bunting.

Birders can get a sampling of Appalachian highland birds at Caesars Head State Park, about 20 miles northwest of Greenville. The dense forests and rugged mountains in this region host a number of nesting birds uncommon or not found breeding elsewhere in the state.

Peregrine Falcon has been reintroduced in parts of the southern Appalachians and is making a comeback; it might be seen in this area. Caesars Head can also be a good hawk-watching site in fall. Broad-winged Hawk numbers peak in late September.

There’s an extremely popular recreation and vacation area on Folly Island, just south of Charleston, called Folly Beach. Swimmers, sunbathers, picnickers, and other fun-seekers crowd it in summer. The center of the island has many restaurants and other tourist amenities.

At the quieter north end of Folly Island, an old Coast Guard station has been turned into a county park called Lighthouse Inlet Heritage Preserve. The site, a favorite of local birders, has a long species list.

The preserve has a view of the Atlantic Ocean, Lighthouse Inlet, and nearby marshes. It’s the kind of place where anything can happen by. Shorebirds are abundant and many nest here. Fall migration can be excellent as southbound raptors and songbirds follow the coast. Winter brings possible sightings of Black Scoter, Red-throated Loon, Common Loon, Horned Grebe, Northern Gannet, Purple Sandpiper, and jaegers.

Facilities are few as of this writing, but more are planned. The major problem here is parking, or lack of it. There are strict rules about parking in this area, and it can be difficult in summer and on weekends.