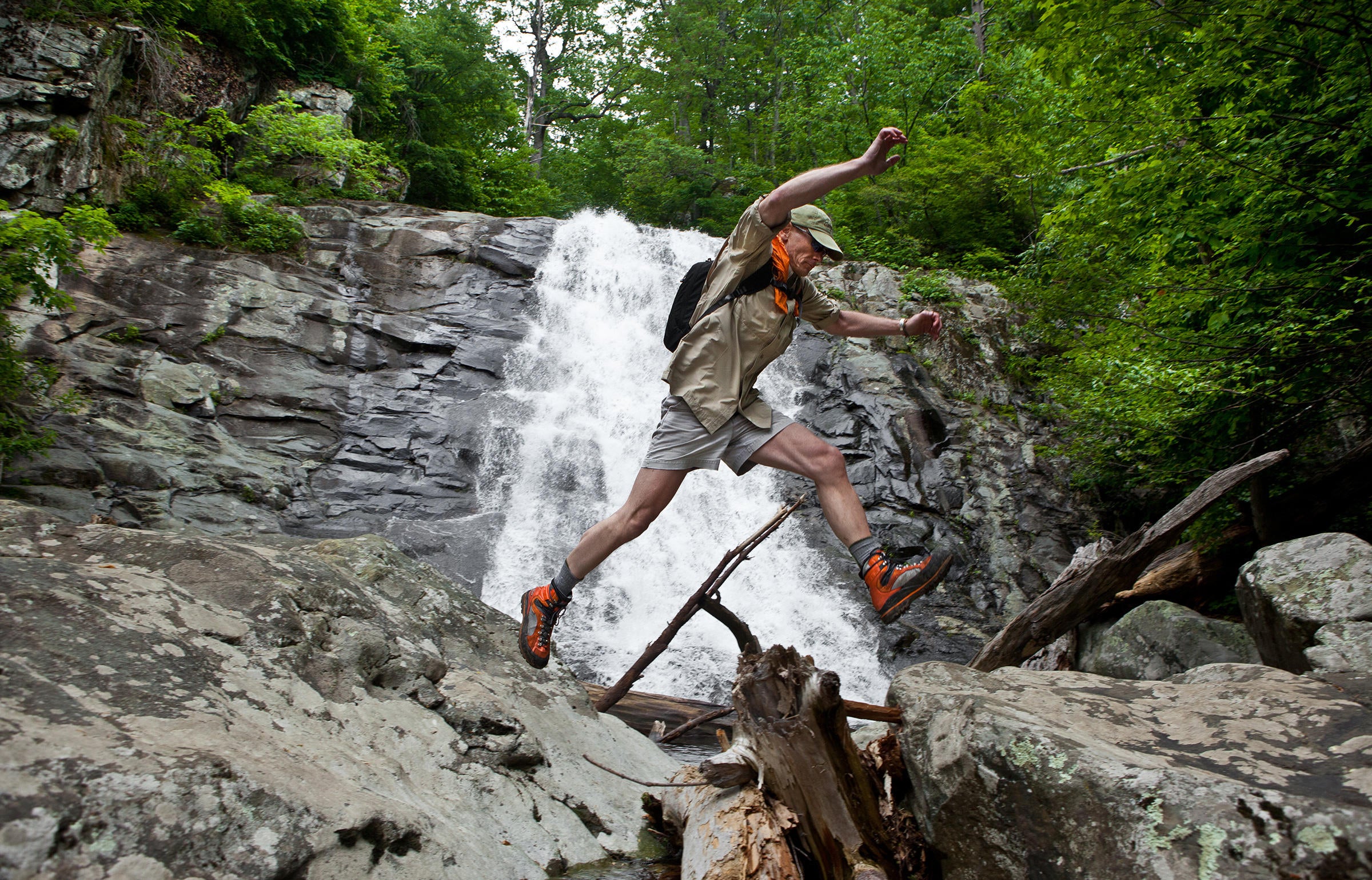 From Chincoteague to Shenandoah, Virginia has a lot to offer for birding excursions.

It’s a long way from the crowded Beltway around Washington DC to the Appalachian Mountains near Cumberland Gap. It’s even farther if you make a detour to the coastal marshes of the Delmarva Peninsula.

Birding in Virginia includes all this: urban preserves, refuges along the Atlantic shore, and peaks topping a mile in elevation. Among the highlights are the windswept beach and marshes of Chincoteague National Wildlife Refuge, located on a barrier island in the Atlantic Ocean, which boasts a bird list of more than 300 species.

Along the western border, the Blue Ridge Parkway and Shenandoah National Park offer 325 miles of scenic driving, as well as access to many birding locations in the Appalachians. Bird lists for sites in the high mountains aren’t as long as those for coastal wetlands, but they include nesting thrushes and warblers in the southern extension of their range

Great flocks of waterfowl migrate through and winter at this Atlantic Coast refuge, but that’s only one part of its birding appeal. Raptors, shorebirds, and songbirds also attract birders to Chincoteague.

Located on the southern end of Assateague Island, a barrier island that extends north into Maryland, Chincoteague comprises beach, dunes, shrubland, maritime forest, freshwater wetlands, and salt marsh. The refuge manages some of its pools to create mudflats for shorebirds in late summer and fall. It provides deeper water for waterfowl, including Tundra Swan and thousands of Snow Geese, from late fall through spring. More than 40 species of shorebird have been seen here, including rarities such as Ruff and Curlew Sandpiper. The endangered Piping Plover nests here, and some beaches are closed to protect it and other species.

Many birds migrate along the Atlantic Coast in fall, bringing songbirds to shrubs and trees, peaking in September. Raptors stream along the coast, with regular fall sightings of birds such as Cooper’s Hawk, Sharp-shinned Hawk, Merlin, and Peregrine Falcon.

Among the nesting birds here are up to 11 species of wading birds, Osprey, Clapper Rail, Virginia Rail, Black-necked Stilt, American Oystercatcher, Least Tern, and Black Skimmer. Brown-headed Nuthatch can be found in pines.

Several trails are open to walkers. One trail, the three-mile Wildlife Loop, allows vehicles from 3 p.m. until dusk; before then it’s reserved for hikers and bicyclists.

Located at the southern end of the Delmarva Peninsula, this refuge has the advantage of a very favored geographic location. In fall, southbound birds are funneled into the tip of the peninsula, where they pause to rest and feed before continuing their journey.

Waterfowl, raptors, shorebirds, and songbirds pass through the refuge, where a bayberry thicket may have several warbler species and a pond may host hundreds of shorebirds, all while thousands of Tree Swallows swirl overhead and a Peregrine Falcon zooms by on powerful wingbeats. Butterflies follow this path, too. Up to 10,000 monarch butterflies have been counted here on a single fall day.

Ducks such as Gadwall, American Wigeon, Northern Shoveler, and Bufflehead are common here in winter, when Northern Harrier hunts over the fields and a Northern Saw-whet Owl might be seen perching in a tree.

Part of this 9,250-acre refuge was once set to be another seaside commercial and residential area along an Atlantic Ocean beach, but today it hosts abundant waterfowl and marsh birds instead. Located just south of Virginia Beach, it spans a strip of land between the Atlantic and Back Bay, with sandy beach, dunes, woods, fields, and marsh.

Unlike many national wildlife refuges, Back Bay has no miles-long wildlife drive. Observation here is on foot or bicycle via five trails totaling eight miles. There are viewing platforms, and trails that meander to the beach, bay, and impoundments, although much of the refuge has no public access, providing protections to wildlife. The refuge also offers guided tram tours, another way to experience the refuge.

Snow Goose, Tundra Swan, and many species of ducks, loons, and grebes can be found from fall through spring, and shorebirds are abundant in spring and fall. Back Bay is a good place to see Peregrine Falcon migrating along the beach in October.

One of the most important fall hawk-watch sites in the country is located at this state park on the Eastern Shore of Virginia. The hawk watch began in 1977, and has accumulated a list of 19 species, having recorded 750,000 individual birds.

Observations begin on September 1, with Osprey and Broad-winged Hawk among the most common raptors passing by. The Kiptopeke hawk watch describes itself as “the best place in the world to see migrating Merlins and Peregrines.” What does that mean? The record one-day count for Merlin is 462 and for Peregrine Falcon 364. Golden Eagle, Northern Goshawk, and Red-shouldered Hawk peak later in the fall. And there are occasional rarities such as Swallow-tailed Kite or Zone-tailed Hawk.

Kiptopeke State Park is a great place for fall migrant birds of all sorts, as they’re funneled toward the tip of the Delmarva Peninsula on their southward journey. Flycatchers, vireos, thrushes, and warblers can be diverse and common in September and October.

One of the favorite natural areas of Capital Area residents is this Alexandria park, located about seven miles south of Washington National Airport. Huntley Meadows encompasses 1,557 acres in an old channel of the Potomac River, and has a bird list encompassing more than 240 species.

The half-mile boardwalk through a wetland is popular with birders, as is the observation tower. The park also has two miles of woodland trails.

Guided Monday bird walks at 7 a.m. have been a tradition at Huntley Meadows for decades, and are very popular.

Set on the bank of the Potomac River, this site protects one of the largest freshwater tidal wetlands in the Washington area. With 485 acres of marsh and swamp forest, Dyke  Marsh  Wildlife  Preserve is a unit of the George Washington Memorial Parkway, administered by the National Park Service.

More than 270 species of birds have been seen here in recent years, although historical records put the total close to 300. It’s an excellent place to see waterfowl and grebes from fall through spring. Its location as a green belt between the Potomac and urbanized Alexandria makes it a magnet for migrant songbirds in spring and fall. August and September are the time for shorebirds, with more than 25 on the preserve list.

A flat trail, actually an old mining road, runs through the preserve, ending on a small peninsula overlooking the Potomac, where gulls and terns can be observed. A volunteer group leads a Sunday bird walk at 8 a.m., beginning in the south parking lot of the Belle Haven picnic area off the George Washington Memorial Parkway.

This system of trails provides fine and easily accessible birding just a few miles from Colonial Williamsburg. It can be entered south of Jamestown High School, off the street named Eagle Way.

Several loops interconnect, passing through woods, beside swampy areas, and along boardwalks. More than 220 species of birds have been recorded.

The bird list is augmented by dabbling ducks from fall through spring and migrant shorebirds. With its varied habitats, the area is an excellent place to enjoy songbird migration in spring and fall.

This popular park lies in the Blue Ridge Range of the southern Appalachian Mountains, with two summits rising above 4,000 feet. Skyline Drive runs 105 miles along the length of the park, making it easy to stop and explore recreation areas and trails. Birders search the Appalachians for high-elevation species not found nesting elsewhere in the state.

In fall, volunteers hold a hawk watch at Rockfish Gap, at the southern end of Shenandoah. Setting up a viewing area near the Inn at Afton, just south of Interstate 64, they tally vultures, Osprey, hawks, eagles, and falcons. Broad-winged Hawk is most common, and up to 18 species have been seen from August through November.

Southeast of Norfolk, Great Dismal Swamp National Wildlife Refuge protects 112,000 acres of lowland forest, a landscape of bald-cypress, tupelo. Atlantic white-cedar, sweetgum, maple, and oak, with some pine. This wild tract may be the place in Virginia where a visitor is most likely to see a black bear.

The refuge’s wildlife drive leads to Lake Drummond, the largest natural lake in state. Along the way it passes boardwalks into bald-cypress swamp. Reached via a trailhead to the north, Washington Ditch Trail is named for the first president, who was involved with a group that tried to drain the swamp; it also leads to Lake Drummond. It’s a good birding trail, as is the Jericho Ditch Trail, at the northeastern corner of the refuge.

With its wetlands, woods, and open areas, Dutch Gap ranks as one of the best birding sites in Virginia. It’s located on the James River, about 15 miles south of Richmond. The conservation area is entered via Henricus Park, a living-history museum of 17th-century colonial life.

The road to the park passes two viewing platforms allowing scanning of wetlands where herons have nested. In the park, visitors can walk a 3.5-mile trail that offers access to the area’s varied habitats, including a wetland boardwalk.

Dabbling ducks can be common in the wetlands from fall through spring, and the woods here are excellent for songbird migration. Bald Eagle can be seen year round.

One of the first states to develop a statewide birding trail, Virginia set a model for others by dividing its natural riches into three distinct regions, each with its own loop. The coastal section has a southern climate and a southern flavor to its birdlife. Along the beaches and barrier islands, stocky brown Wilson’s plovers run across the sand, shrill-voiced royal terns circle overhead, and squadrons of brown pelicans glide above the waves, just as they would along a beach in Florida. There’s a completely different feel to the state’s western mountains, where you may find nesting birds typical of farther north, such as the colorful Canada warbler singing from the rhododendron thickets and the shy brown veery giving its spiraling airy whistles from moist ravines among the maples. Between the mountains and the coast, the rivers, meadows, and great forests of oak and pine will produce a plethora of colorful birds in all seasons, from eastern bluebirds and red-bellied woodpeckers to rich fox-colored brown thrashers. Wild turkeys have become numerous again, and small groups of them may be seen stalking along the edges of woodlots and fields, just as they did when the first colonists arrived. —Kenn Kaufman