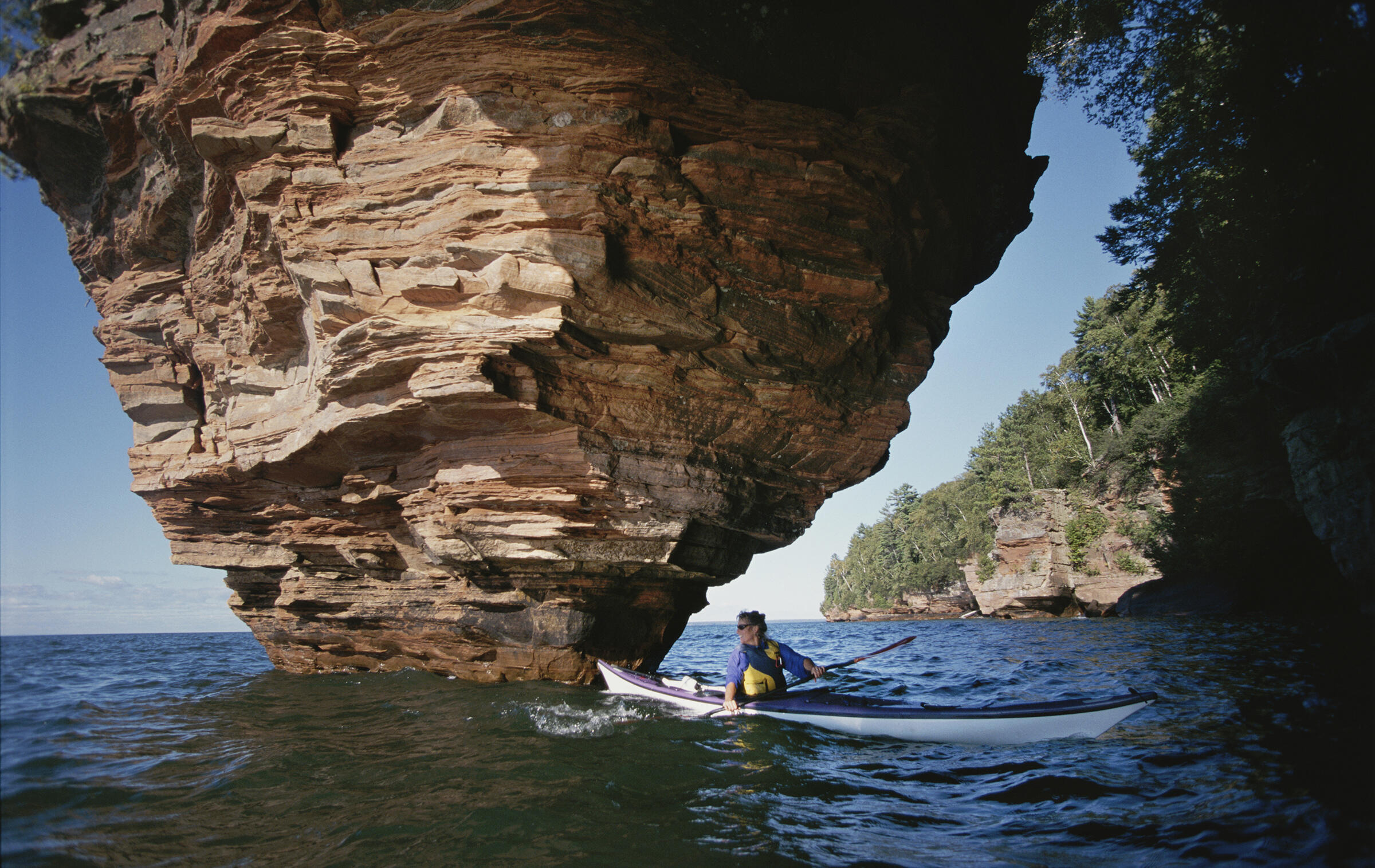 Wisconsin borders two of the great lakes and boasts more than 15,000 smaller ones, so it shouldn’t be surprising that the state is a splendid place to see waterfowl, wading birds, and shorebirds of all kinds.

Several spots along Lake Michigan are good both for waterbirds and as “migrant traps” for songbirds traveling along the shore. The Apostle Islands along Lake Superior provide nesting habitat for more than 150 species. But you don’t have to go big for great gets: Lakeside city parks in Milwaukee and Sheboygan rank with the most productive birding sites in the state.

Wisconsin’s mix of wetland and forested areas are also a big draw for both birds and birders. Horicon Marsh is said to be the largest cattail marsh in the U.S. To the north, the state’s woodlands harbor species such as Spruce Grouse, Northern Saw-whet Owl, Black-backed Woodpecker, Gray Jay, Boreal Chickadee, Cape May Warbler, Connecticut Warbler, Black-throated Blue Warbler, and Canada Warbler.

Indecisive and have time to spare? The Great Wisconsin Birding and Nature Trail cuts across these habitats for birders who want to hit it all.

Located south of Fond du Lac, Horicon Marsh covers an expanse about 14 miles long and up to five miles wide, making it one of the largest freshwater marshes in the country. It was drained for agriculture decades ago but has since been restored. Today, it’s famous for flocks of waterfowl and the wading and marsh birds that nest there.

It’s a big area to explore, but a newcomer will find great resources for a visit. The northern 22,000 acres comprise Horicon National Wildlife Refuge, and the southern 11,000 acres make up Horicon Marsh State Wildlife Area. Each entity has a fine visitor center: the national refuge’s on the east side off County Road Z, and the state agency’s on Highway 28 about two miles northeast of the town of Horicon. The latter has an interactive education area called the Explorium featuring Horicon Marsh history and wildlife. Both areas have miles of hiking trails, and the refuge has a three-mile “TernPike” auto tour.

Crex Meadows is one of the most renowned wildlife-viewing sites in the upper Midwest. Its 30,000 acres of marsh, prairie, and woods host nesting waterbirds in spring and large flocks of Sandhill Crane in fall. To see the cranes, sign up for one of the special tours in October.

While most sedge marshes have been drained and converted to cropland, the habitat at Crex Meadows is intact (the word “meadow” actually comes from the traditional local term for a sedge marsh). Around 40 miles of roads, including 22 miles atop dikes, allow visitors to access the site. The first stop should be the visitor center on County Road F just north of the community of Grantsburg.

This 185-acre area on the shore of Lake Michigan was once owned by a Milwaukee brewing family, but became an Audubon nature center in the 1970s thanks to efforts of local citizen-conservationists. The combination of woodland, grassland, wetlands, and lakefront make it one of the best birding locations in the Milwaukee area.

Six miles of trails wind through the property, and there’s a 60-foot-high observation tower that offers a panoramic view of Lake Michigan and the shoreline.

The center is an excellent site for songbirds in spring migration. In fall, many species migrate along the lakeshore, including raptors such as Osprey, Cooper’s Hawk, Sharp-shinned Hawk, Broad-winged Hawk, Merlin, and Peregrine Falcon. From fall through spring a wide variety of ducks can be seen in wetlands and on the lake, along with gulls and terns in migration.

Situated on the bank of the Mississippi River, Trempealeau covers 10 square miles, much of it wetlands cut off from the river by a dike. It hosts large numbers of waterfowl in spring and fall, and it’s also home to many nesting wetland birds.

The refuge also has bottomland forest, oak savannah, and prairie growing on ancient sand dunes. (Staff members work to restore prairie that has been invaded by non-native vegetation.) The 4.5-mile Prairie’s Edge Tour Loop passes through different habitats and provides access to an observation deck. One of the best ways to see wetland birds here is to walk some of the miles of dikes through the impoundments.

Count Tundra Swan among the more than 15 waterfowl species that might be seen here in spring or fall. American White Pelican, Osprey, Bald Eagle, Sandhill Crane, Virginia Rail, Sora, and Black Tern are among the breeding species. On the grasslands, nesting birds include Grasshopper Sparrow, Henslow’s Sparrow, Savannah Sparrow, Vesper Sparrow, and Dickcissel. Trempealeau is also an excellent place in spring migration for flycatchers, warblers, and other songbirds.

Located in southeastern Wisconsin at the confluence of the Mississippi and Wisconsin rivers, Wyalusing typically attracts nesting species associated with more southern regions. Spring migrants naturally follow the riverbank on their northward journey, making it an excellent place to see warblers and other songbirds as well.

During migration, birds such as waterfowl, American White Pelican, and Osprey can be seen along the rivers. Bald Eagle is present year round.

Many species of the North Woods make Nicolet National Forest home, ranging from the always-elusive Spruce Grouse to colorful warblers. The area east of Three Lakes can be a good area to explore by driving forest roads. Take Highway 32 east four miles to Military Road (2178), then drive north about two miles and east on Road 2182. Or continue east on Highway 32 less than a half-mile, take Lake Julia Road east 0.6 mile, and turn onto Road 2183 toward Scott Lake.

While in the vicinity, consider a visit to Thunder Lake Wildlife Area. From Three Lakes, drive north on Highway 45 one mile and turn left. Nesting birds here include Hooded Merganser, Common Loon, American Bittern, Osprey, Northern Harrier, Sandhill Crane, American Woodcock, Sedge Wren, and some of the warblers mentioned above.

On Lake Michigan 30 miles north of Milwaukee, Harrington Beach State Park has one of the highest species counts of any site in Wisconsin. Migrating birds following the lakeshore can make spring and fall exciting times for birders.

The ducks, shorebirds, gulls, and terns of Lake Michigan also add to the park’s appeal. Explore Harrington Beach’s mile of shoreline, where from fall through spring birds can include White-winged Scoter, Long-tailed Duck, Red-breasted Merganser, and a rarity such as Harlequin Duck or Glaucous Gull.

In September or October, it’s possible to see Osprey, Northern Harrier, Sharp-shinned Hawk, Cooper’s Hawk, Bald Eagle, Red-tailed Hawk, American Kestrel, Merlin, and Peregrine Falcon migrating through the park, along with occasional rarities. Days with west wind are best, since the traveling birds are pushed up against the shore.

In southwestern Wisconsin, Yellowstone Lake State Park features a diversity of habitat and an array of nesting species that place it among the state’s best birding sites.

For a change of pace, you can also look for a different type of winged creature. Yellowstone Lake is the summer home of more than 4,000 little brown bats, which roost in 31 bat houses throughout the park.

With its hallmark lighthouse built in 1880, Wind Point extends into Lake Michigan 3.5 miles north of downtown Racine. Birders visiting here from fall through spring have found more than 270 species, one of the highest totals of any site in the state. It’s one of those places where just about anything can show up at any time.

Scanning the lake might turn up scoters, Long-tailed Duck, mergansers, Red-throated Loon, Common Loon, Red Phalarope, jaegers, or gulls such as Thayer’s, Lesser Black-backed, and Glaucous (to name species with varying degrees of rarity). Birders can look over the water not only from the lighthouse area but also from the parking lot at the golf course a half-mile south.

Many kinds of shorebirds are seen along the water, and Purple Sandpiper is sometimes spotted on rocks from November through January. In migration, the point concentrates songbirds that are following the shoreline, and rarities such as White-eyed Vireo and Connecticut Warbler have shown up. Vegetation covering the area around the golf course and the slopes descending to the lake provides a place for migrants to rest and feed.

Read the slogans and you might not associate this state with anything but dairy farms and cheese. But by looking through their binoculars, birders will see that Wisconsin is a microcosm of the entire Midwest. Typical habitats and birds from all compass points are represented among this statewide birding trail’s 368 sites. To explore the spruce and pine forests in the trail’s northern section is to evoke an ineffable sense of the great north woods, and you might find nesting pine siskins, boreal chickadees, or northern saw-whet owls. A full complement of eastern North America’s woodland birds may be found in eastern Wisconsin’s hardwood forests, with everything from ruffed grouse to tiny blue-gray gnatcatchers. The central region’s damp meadows are the places to hear the chatter of fidgeting sedge wrens by day and the bubbly aerial flight songs of American woodcocks at dusk. The edge of Lake Michigan produces concentrations of migrating hawks and songbirds plus a chance to see rare water birds. Great flocks of ducks and geese gather on small lakes in the state’s interior. —Kenn Kaufman