I’d been off the Clark Fork for a year. It started snowing at my cabin in early November, and I’d hung my canoe from the side of the porch with bungee cords and huddled up for the winter. When the new year came I took a temporary job teaching rudimentary writing skills to high school kids in rural eastern Oregon that took me away from Montana for two months.

When I got back, the snow had already started to thaw, and it kept thawing, in a quick and steady melt-off that turned Missoula’s rivers to boiling mud.

There are several sorts of spring, water-wise. High-altitude temperatures can remain cold and the ice pack frozen well into what’s supposed to be spring, delaying the front end of canoeing season, or the thaw can come fast and furious, melting everything at once, flash-flooding the rivers and flushing out in a matter of days. The latter means a short rush of too-dangerous deluge followed by a long summer of low water. The thaw can also start early and pace itself in sustained release, which means a long spring and decent chunk of summer when the water is just right for boating. 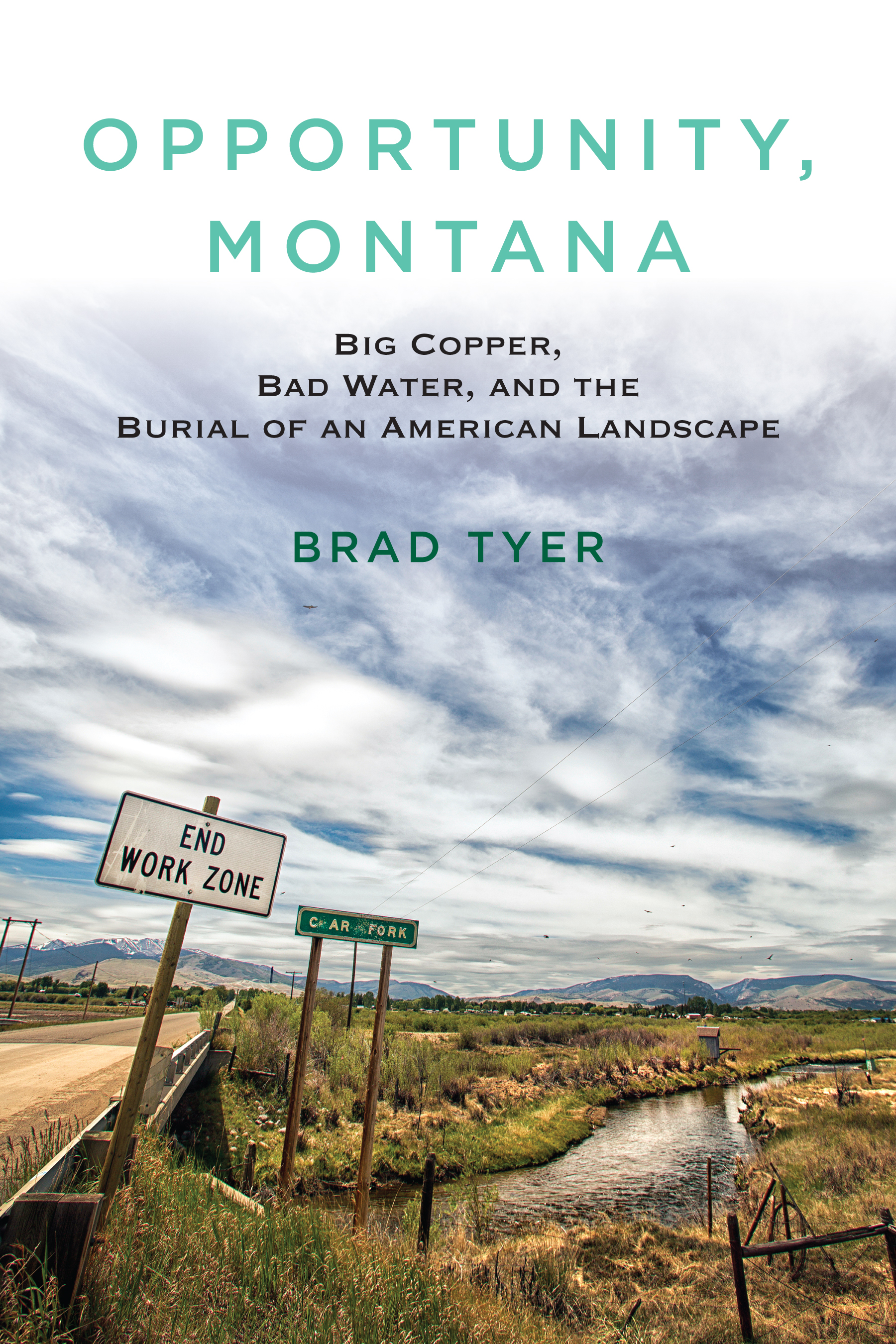 Opportunity, Montana: Big Copper, Bad Water, and the Burial of an American Landscape

The water in the spring of 2011 was sustained, and it was high, but the twisty little upper Clark Fork, all sharp turns and undercuts, isn’t anyone’s idea of whitewater fun. That water is narrow enough to pin a tree trunk from bank to bank, and canoeing full-to-the-banks, pushy water, with nowhere to turn and a woody sieve between you and your destination is a good way to die an unpleasant death.

Instead I paddled a rocky section of the cold Blackfoot at 10,000 cfs—3,000 is more what I’m used to. I joined friends for a highwater float on the wider Clark Fork in Missoula, below the dam site, traveling in twenty minutes what usually takes an hour. We took out at the rock beach below the Finn & Porter restaurant (the water was too turbid to draw the otherwise de rigueur fly fisher), and walked up to the porch for a beer. Missoula’s nice like that.

Long as it was, water-wise, spring turned into summer with seeming suddenness. Four full seasons cramp each other, no matter how you slice them. I took a few more trips down the Blackfoot, and a few on the Clark Fork through downtown. On a whim, I decided one day to float a section of the Bitterroot. I was sitting still in the middle of a wide spot in the river when a robin swooped upriver and landed on my head. I was surprised, and my fluster flustered the bird, which took off as soon as it realized where it was. I guess I looked like a log.

In mid-July I went with Quinlan and his wife, Jori, to the Canadian border and spent three days spinning down the North Fork of the Flathead River, the western borderline of Glacier National Park. We’ve done that every July for six years now and I look forward to it like I used to look forward to Christmas.

For Labor Day weekend I joined friends on an overnight on the main Flathead, below Flathead Lake, through Flathead Indian Reservation lands. We did nothing but drift, eating shore lunches of fresh-caught smallmouth bass fried in cornmeal and drizzled with lemon.

It was early October, after a month of trying and failing to interest a shuttle-driving second to join me, before I strapped the canoe on the truck and went back to the river I’d come for. I put in at the Arrow Stone Park in Deer Lodge, the county seat, where I’d taken out at the end of my last float the fall before. The sign at the road carries a cutout of an arrowhead almost exactly like the one the Anaconda Company used as its corporate logo. A couple of hundred yards downstream, someone had propped a sheet of plywood on an upturned crate to make a ramp for launching bicycles Jackass-style into the river’s adjacent pool.

The first two miles sneak through the town of Deer Lodge and behind Montana’s mothballed territorial prison, established in 1871, just a year after William A. Clark moved here to launch his banking career. Clark would later fund construction of a thousand-seat theater in the prison, just as he would build an amusement park in Butte called Columbia Gardens, where miners and their families rode Clark’s trolley to congregate on weekends for rollercoaster rides and popcorn. Clark seems to have had almost a fetish for keeping the serfs entertained.

The old prison at Deer Lodge was closed in 1979 and was reincarnated as a modern facility five miles west and farther from the river. The defunct original eats up two city blocks, a redbrick, inmate-built inner sanctum surrounded by a perimeter wall of sandstone four and a half feet thick, cornered with turrets that make it look like a medieval castle. Today the complex is a museum with a split personality, dedicated in equal parts to tours of the old stone fortress, now separated from Main Street by nothing but a sidewalk, and to an incongruous collection of classic cars accumulated by Sherm Anderson, who makes his hobby money operating Sun Mountain Lumber, a lumber mill just across the river from the old prison’s back wall.

I pass between banks striated with rusty chemical orange slumping over eroded undercuts and nudge my way past glossy pillows of water hiding grassy root balls under the surface. Downwind of the lumber mill, with thousands of cut and trimmed logs stacked just back from the bank, the smell of sawn wood asserts itself and lingers around the next bend. On one bank a retired orange-and-black locomotive stands static on an isolated spur. On the other, edging a junkyard profusion of abandoned car parts and rusting construction equipment, a psychedelic school bus rots behind a barn. After I pass an RV park hosting a white-haired man looking at a laptop outside his Storm model travel trailer, I am out of town.

It’s a blue-sky day with what Bob liked to call photographers’ clouds and a tailwind pushing the canoe perpendicular to the banks. I spend a lot of time trying to pry myself straight with the paddle. There are too many shallow spots to just drift sideways. I glide over a chunk of white corrugated fiberglass paneling and past a corroded gas tank half-buried on shore and come to the river’s first literal warning sign, in red and white lettering on a black and white background, stuck into the soil and framed with weeds blowing in the breeze.

with mine waste soils located next to the

Clark Fork River may be harmful to your

inhalation of any exposed sand-like soils

near the River that have little vegetation

or contain a white, blue, or green salt

appearance on the surface. For more

“Sand-like.” I am standing in just such a slicken as the sign describes in a strong downstream wind. This slicken is an acre or so. Opportunity sits next door to four thousand of these. This modest dead zone, more stunted than truly lifeless, probably owes its warning labels to its presence on the Grant-Kohrs Ranch, a 1,600-acre national historic site operated by the National Park Service on Deer Lodge’s outskirts. In its heyday, the ranch’s ten-million-acre empire skirted nothing; mere townships skirted it. Today it’s a working ranch and interpretive site. The Park Service, unlike other entities up and down the river, has a budget for signs. I’ll pass two more before I’m done for the day, and a couple more unsigned slickens, with their familiar blue and green pimples, forming raw gullies where runoff sluices into the river. A few feature wooden stakes flagged with pink nylon ribbon, presumably to direct the crews that will be following me downstream over the next several years, digging the bad patches out.

I also pass ducks, a goose, a plenitude of splashing fish, a deer, and what is likely either a mink or an otter. I hear him slide and I see the mud he trails cloud the water at the bottom of the bank. Later I scare two giant bald eagles off their perch in a lone cottonwood and watch them soar off downstream.

It’s becoming easier to take the poison part for granted and ignore it in favor of the more immediate sensory experience. The distinct but conjoined sounds of rippling water and wind gusting dry grass is momentarily exquisite. The hills, starting to close in here at the tail end of the valley, are arranged in soft undulations and shadowed with the contours of weathered mudslides. Bright light gives depth and volume to their monochromatic swell, and for a minute I entertain the fancy that I could grab the hills’ skin like the hem of a bedspread and unfurl it into the sky, snapping off the slickened soil and toppling the dwarfish pinyons, and let it waft back to rest refreshed.

Take away the fences, the concrete rubble, the mine waste, and the occasional noise blown over from the interstate and I could almost convince myself that I’m paddling through virgin Montana prairie, but then I don’t know what virgin prairie would look like. The pinyons that look to me to be stunted by mine waste could just be the offspring of a naturally dry microclimate, growing exactly the way nature intended. The relative lack of river-bottom cottonwoods may be nothing more than the spotty expression of thin and naturally alkaline soils. Whatever “natural state” means, there’s no sorting it out now.

Around another bend a four-cow crew of Black Anguses panics at my approach, deciding for some reason they’d feel safer on the other side of the river. They crash from their low beach across a shallow spot and up onto a high bench, lowing at me with what sounds like menace and probably would be, if they knew about the open bag of jerky between my knees.

Another couple of meanders and I’m at my takeout, a fishing access site off the feeder road called Kohrs Bend. The place was empty when I hid my bike in the bushes four hours earlier, but there’s a bright red Ford truck parked there now, and I pass its owner on my approach to the sandy spit where I’m beaching the canoe. He’s fishing from shore and I give him as wide a berth as the river allows, apologizing for disturbing his water.

He waves me off with the self-deprecation I’ve come to expect from fishers almost anywhere but Texas: “I’m not catching anything anyway.”

I paddle the canoe up onto the sand and feel the abrasive grind shiver through the thin hull and up my thighs. I get out and walk into the river, just standing there, chilling my ankles and stiff knees, and watch the baldy I’ve chased downstream cruise the jittery gusts over the highway.