Cats Pose an Even Bigger Threat to Birds than Previously Thought 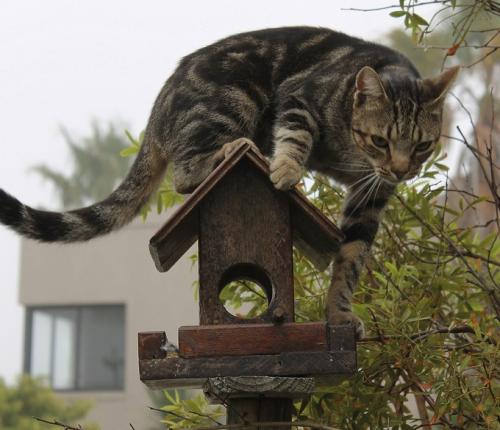 Cats’ bad reputation among bird-lovers may be well deserved. A new study estimates that domestic cats, considered a global invasive species, kill 1.4 to 3.7 billion birds in the lower 48 states each year.

“Our findings suggest that free-ranging cats cause substantially greater wildlife mortality than previously thought and are likely the single greatest source of anthropogenic mortality for US birds and mammals,” write the authors of the study, published in Nature Communications.

More birds die from cat encounters than from collisions with buildings, communication tower, or vehicles, or poisoning by pesticides. Two-thirds of the killers’ avian victims are native species.

The authors of the paper reviewed 21 studies, which they used to estimate cat population and predation rates. The paper is part of a larger effort to quantify all human-related causes for wildlife mortality.

Previously, scientists knew that domestic cats had devastated native species on islands and contributed to 33 modern extinctions. But it had been unclear just how dangerous they are on the mainland.

The most voracious killers are cats without owners—such as barn cats or feral cats living in cities. We therefore might get our biggest improvement in bird mortality changing our management of feral cats, the paper’s authors suggest. Currently, many feral cats are managed in “Trap-Neuter-Return” colonies. The policy does keep cat populations from growing and avoids mass cat euthanasia, but the paper say it is “potentially harmful to wildlife."

“The results are remarkable, not only for the big number, but also for the proportion of deaths from feral cats,” Gary Langham, chief scientist for the National Audubon Society, told Science News. “These numbers really elevate this threat to a new level.”

Pete Marra, an author of the paper and a scientist at the Smithsonian Migratory Bird Center, suggested to Science News that cat owners might want to have their cats spend more time indoors.

The authors say that much more research is needed to pinpoint the areas and times of year when native birds and mammals are in the greatest danger from cats, and to establish which species need the greatest protection.