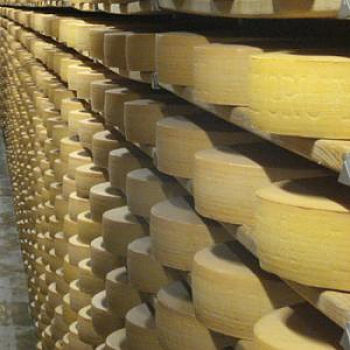 It’s not news: We need to eat less meat. Producing meat ready for the plate takes large amounts of fuel, fertilizers, pesticides, and water. Eating meat can also put your health at risk and endanger animal welfare. That’s why what you eat matters, says the Environmental Working Group, which recently released a “Meat Eater’s Guide to Climate Change and Health.” But even vegetarians may be hard pressed by the group’s findings. As it turns out, public enemy number three, right after lamb and beef, is cheese.

EWG partnered with CleanMetrics, an environmental analysis firm, to examine 20 types of meat, fish, dairy, and vegetable proteins and evaluate their impacts on the earth. Together, they looked into fertilizers, pesticides, feed, transportation costs, and how much of the final product was ultimately thrown away, including many more factors. They found that different foods impact the environment in different ways, and to lessen our footprints on the earth, we need to change our eating habits. 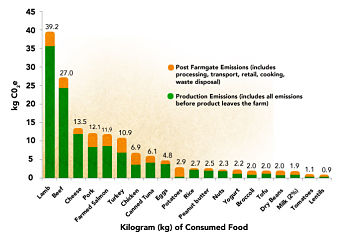 Beef, which ranked second for harmful impact on the earth, emits almost four times as much carbon dioxide than chicken and 13 times more than vegetable proteins, such as lentils, beans, and tofu. What’s surprising is that chicken, salmon, and even pork made out better than cheese. Cheese wound up high on the list because it takes a lot milk to make a little cheese. Dairy cows release large amounts of methane, which is a worse greenhouse gas than carbon dioxide, and let’s not forget the amount of feed and antibiotics that the cows need.

EWG recommends eating less cheese. But it just so happens that cheese is delicious. So, while you may not be able to go without, eat lower-fat cheeses, such as skim mozzarella, gouda, and cottage cheese, which have less effect on the environment and your health. As another consolation, the ranking is based on the ounce. While big burgers and steaks are typical meal options, it’s rare that someone sits down to eat a wheel of cheese. Most people use it sparingly anyway, though we can still choose local cheeses rather than those flown over from Europe to minimize costs.

Also read:
The Lawnmower Man: Do Park Officals Need to Worry About Foragers?
Gone Fish: Seafood Guides
Peeling Back the Label: Are your foods really 'green' ?