For the past four years, Mindo, Ecuador, has been the top Christmas Bird Count in the world. In each of those years, more than 400 species were counted and more than 125 people participated. On December 18, 2010, I was one of the participants.

Why does Mindo do so well? First of all, it doesn’t hurt that Mindo is practically on the equator. More species of birds are found in equatorial regions than in temperate or boreal ones. Also, Mindo is in the Andes Mountains. In mountainous areas, different bird species are found at different elevations. The countries of the tropical Andes host more bird species than any other collection of countries in the world. As a single country, Ecuador ranks fifth internationally in terms of bird diversity, only because it is very small compared to the competition. Because of the importance of Mindo to bird conservation, it was named a globally Important Bird Area in 1997.

But what really puts Mindo at the top is its citizens’ enthusiasm for birds and for the Christmas Bird Count. It is the only Christmas Bird Count I know that brings out more than 100 people (10 percent or more of the town) for a pep rally the night before the count—and I really enjoyed being a part of it. We all assembled in the community center to hear a history of the CBC, celebrate Mindo as the #1 CBC in 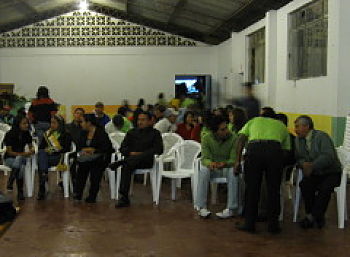 the world, and watch teens and pre-teens performing folk dances for an hour and a half. We also received attractive lime-green t-shirts, a signed certificate verifying our participation, and a 2011 calendar. In 35 years of U.S. CBCs, I‘ve never accumulated ANY of those goodies! 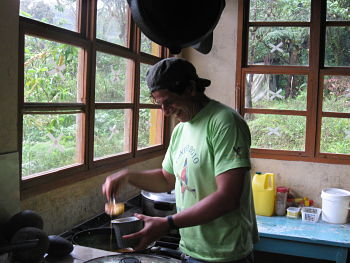 Luis Saltos, with the Mindo CBC t-shirt,  photo by the author

Mindo is a town of 1,200 people with 60 trained birdwatching guides (5 percent of the population). I stayed overnight at the “Birdwatcher’s House,” one of many spots in and around Mindo catering to traveling birders. The house is owned by Vinicio Perez, certainly one of the best of the 60 guides (and an excellent bird photographer, as you will see below).

You might think – being so close to the equator – that another of Mindo’s advantages is warm, tropical weather, but you’d be wrong. Mindo is about a mile high, and much of the CBC circle is even higher. December is the wet season, and Mindo is surrounded by cloud forest. 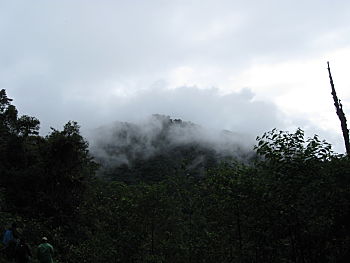 The high temperature on the CBC this year was somewhere in the low 60s. Such conditions can make birding a daunting task. Case in point: I arrived in Mindo during a downpour. As my birding party drove up to the field station at Reserva Rio Bravo, we crossed a river and stopped for a few minutes for all the participants to exclaim about how high the river was and how powerfully it was flowing. Luckily, there was no rain when we woke up at 4:30 a.m. to start the count, and we stayed dry throughout the morning. We were due for lunch at the field station by 1 p.m., but we decided to take a 20-minute detour to see the waterfall. 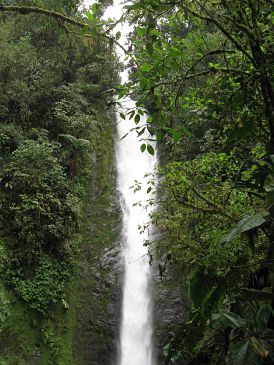 Big mistake! While we were at the waterfall, the skies opened up, and it didn’t stop raining until after dark. I didn’t get dry until I returned to the states.

With about 160 participants, the Mindo CBC can deploy a lot of birding groups, so we don’t all get to see the 400+ species that live in the area. Our group, led by Giovanny Patino, saw a little more than 70 species, which isn’t the highest count I’ve ever had on a CBC, but it was definitely the most exotic group of species ever. 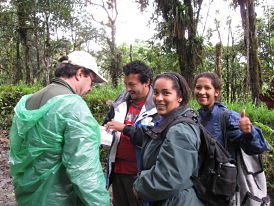 Our group: Agustin Carriquiry, Giovanny Patino,
and Alejandra and Jenny Diaz, photo by the author

We started in the dark, but instead of an owl, our first encounter of the morning was a small black mammal, perhaps a wild cat, but most likely a tayra, a member of the weasel family. First we saw the shine from two red eyes, then watched the black body and prominent black tail as it scurried through the grass below us.

It was a great morning for fruit-loops lovers. My first bird of the day was a Pale-mandibled Aracari 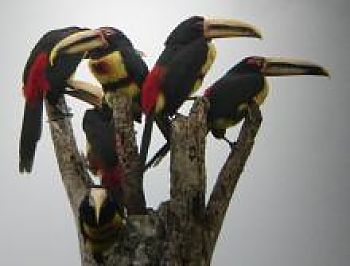 – which quickly turned into four aracaris and two Crimson-rumped Toucanets. I had great looks at a Mindo specialty, the Toucan Barbet, and learned to pick out their musical “hoots” from a distance. All three species are smaller than toucans, but have large, colorful beaks like the one that makes the toucan so iconic. A pair of full-sized Chestnut-mandibled Toucans were the icing on the cake – they were out in the open and courting. One (the male?) contorted his huge beak into a variety of dramatic poses accompanied by loud yelps. His mate didn’t seem too impressed, but at least she didn’t fly off. 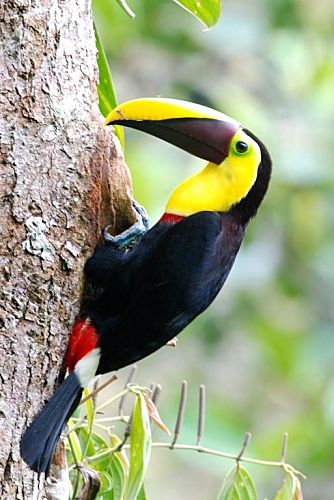 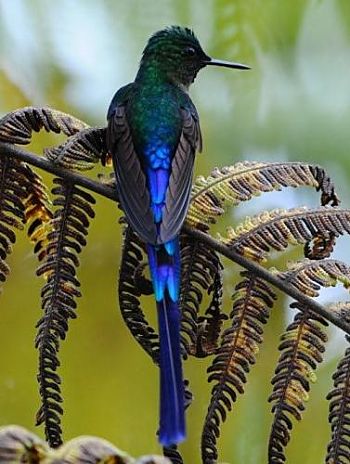 It would be unfair to pick a favorite tanager because there are dozens of species in the genus Tangara alone and almost all of them are beautiful. The Tangaras are all built on a standard body plan, and they look like God paid Picasso to randomly assign colors and patterns to each of the species – the more garish, the better. (The scientific explanation is that the variety of colors is generated through intense sexual selection for mates.) 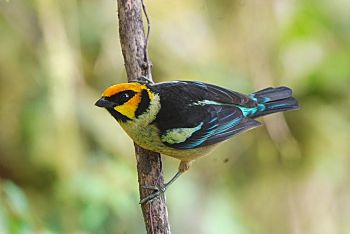 As usual, I will avoid mention of the dozens of small brown jobs of wide variety that are almost impossible to identify or to get a non-birder excited.

A special treat when birding in Latin America in winter is encountering North American breeding birds in their exotic non-breeding settings. Among the most common birds on our CBC were Blackburnian Warbler and Swainson’s Thrush. Much rarer, but still expected, was our single, but detailed, sighting of an Olive-sided Flycatcher, a bird undergoing severe population declines throughout its range.

One of our last sightings was also one of the most interesting. We found a large screech-owl perched in a palm tree, where we got surprisingly good looks. We all agreed that it was a Rufescent Screech-Owl. It matched all the characteristics but one – it was tan or blonde, not rufescent (i.e., dark rusty-red). Since screech-owls have color morphs, we assume that’s what this was. The other interesting part is that many ornithologists call our bird Colombian Screech-Owl, separating it from the similar birds found on the eastern side of the Andes. In Ecuador, a birder is never far from the frontiers in ornithology.

Given how much fun I had, you would assume that I had put a great deal of focused attention on making sure this event occurred, but instead I left most of these events to fate. I was in Ecuador to attend the BirdLife Americas Partnership Meeting, and I had to put a lot of my attention on that. Sixty bird conservationists throughout the western hemisphere met to share success stories and plans for future conservation in a week-long meeting. Luckily for me, our local hosts from Aves y Conservacion were able to connect me to the Mindo CBC right after the meeting, and a fantastic birding memory was launched. 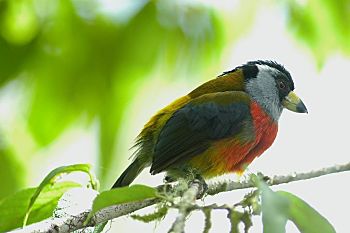