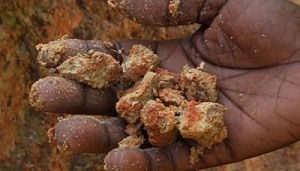 In the deep south of the U.S., the smell of a fresh dirt road on a humid summer day is enough to trigger some locals’ mouth to watering. Shugana Williams, an archivist and librarian at the University of Southern Mississippi Gulf Coast, recalls sitting around the fireplace as a little girl in Laurel, Mississippi, while the old folks baked freshly dug earth in aluminum containers. “They’d just sit there and eat it,” she says, “a red dirt, as they called it.” Both of her parents, born in the 1940s, eat dirt to this day. Williams’ father spoke of his mother and sisters consuming earth when he was growing up in Alabama, and Williams’ mother says her own grandmother and mother partook in the practice in Mississippi. “It’s really a heavily traditional thing that they do,” Williams says.

They aren’t alone. People across the globe have practiced dirt eating—or geophagy—for millennia. Geophagy is a type of pica, or the purposeful consumption of non-food items like ice, earth, or uncooked starches like rice. The first reference dates back more than 2000 years to Hippocrates, but archaeological evidence suggest the practice is thousands of years older, still.

Yet despite geophagy’s long history, researchers are only now discovering what drives the cravings. In some cases, at least, earth eating may protect the diner from toxins, parasites, and pathogens—contrary to some previous assumptions that geophagy arises because people either have nothing else to eat or because soil contains nutrients they lack.

Sera Young, a nutritional anthropologist at Cornell University, compiled 480 records—all that she could find—referencing the behavior. They extended from 2,000 years ago to the year 2010, from infants to the elderly, and from the arctic to the tropics. She turned up records of geophagy in David Livingstone’s accounts of east Africa, in slave plantation records, from Jefferson Davis’ wife’s writings, and in scribblings of Siberian anthropologists. Young found geophagy seemed most often referenced in women, especially those who were pregnant, and also in pre-adolescent children and people suffering from gastrointestinal stress.

Distributions of geophagy around the world. The darker the country, the more common the practice, according to Young's findings. The darkest countries, like the U.S., have more than seven accounts of populations engaging in dirt eating.  Credit S. Young et. al.

Young explains the paradoxical idea of dirt as a cleansing substance in an article published in The Quarterly Review of Biology. Clay, the dirt of choice for most geophagists, binds to toxins and pathogens like bacteria and parasites. It’s sticky, so it also forms a layer over the mucus lining between the gut and the blood stream, reducing the digestive organs’ permeability that could otherwise allow harmful substances entry into the body. Clay is often used to prepare foods known to be dangerous: aborigines in Australia use it when cooking a tuber that causes diarrhea if eaten raw, and in the Andes, clay is used to protect against Andean potatoes that contain glycoalkaloids, a potent toxin. And humans aren’t the only ones who engage in this behavior. Especially in tropical areas, primates and birds often eat dirt, probably to detoxify harmful plants they munched on.

Young found that dirt eating is most often commonplace in hot, humid climates—places teeming with tropical microbes. Her research also revealed that those most immunologically vulnerable—namely pregnant women, children, and those already suffering from gastrointestinal problems—were those reported to most frequently consume earth. 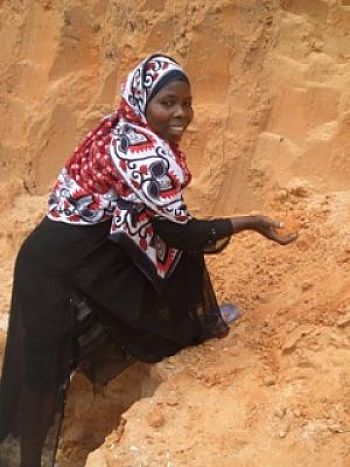 Pregnant women, especially during in their first trimester, have lowered defenses so their body doesn’t reject the developing fetus. Young found more reports of pregnant women consuming dirt than all other reports combined. “My mom says she ate dirt when she was pregnant with me,” Williams says, “and I had a girlfriend from New Orleans whose mother ate dirt when she was pregnant with her, too.” Indeed, in India geophagy was described as “a sign of the commencement of pregnancy” in 1906, and in southern Africa,
Girl collecting earth in Zanzibar. Credit S. Young.
records indicate “It would be very surprising if pregnant women in Malawi did not eat clay. That is how you know when you are pregnant!”

Geophagists are highly selective about the dirt they eat, often gathering it from places less likely to contain contaminants, such as a deep hole. Dirt can be eaten raw, but it’s often baked, fried, sun-dried, or smoked.

Preference for clay-like soil was indicated in 98 percent of the 243 reports Young analyzed that included descriptions of the earth type. Often, a particular spot was preferred over others. Williams’ mother and father only eat clay harvested from their childhood homes. They don’t have the right type of dirt in Laurel, Williams supposes, so today her parents hold out for the red dirt of their hometowns and indulge in the treat when visiting their families. She recalls that when her mother sent food to relatives who had moved to Chicago or New York, she always included home-dug dirt. Williams herself accompanied her father to his old home, where the two dug up and tried the dirt, which “tasted a bit sour.”

Young also had occasion to sample dirt. While finishing her graduate research, she found herself stuck overnight at the airport in Dar es Salaam, Tanzania, sick to her stomach from eating a slice of chicken pizza. “I was throwing up, diarrhea, everything,” She recalls. Out of options, Young turned to her clay field samples, and decided to “treat herself” by putting her theory to the test. “I ate this clay, and it really helped!” she says. Young emphasizes that she’s not prescribing it, though, and says it must be an acquired taste since it reminded her of “stale air” and left a coating on her tongue. “It smells better than it tastes,” she admits.

And there are potential downsides, Young warns. Anemia is often associated with the practice, perhaps because clay prevents necessary nutrients like iron and zinc from absorbing into the body. More research is needed to explore this link.

For now, Young hopes her research will encourage others to “stop regarding geophagy as a bizarre, non-adaptive gustatory mistake.” Young, who recently had a baby, didn’t experience any pica cravings, including for dirt. She jokes, “The whole purpose was to see if I would get pica when I was pregnant!”