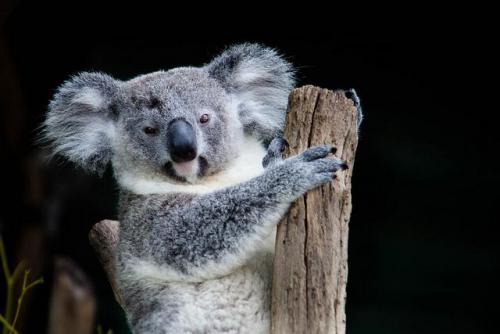 A koala in an Australian sanctuary. (Photo by Jo Christian Oterhals/CC BY-NC-ND 2.0)

The koala is a fragile species. Population crashes have eliminated much of its genetic diversity, and it’s been ravaged by disease, including an immune-weakening virus and devastating waves of koala chlamydia (yes, related to the sexually transmitted disease in humans, which can render women infertile). Human development and climate change threaten the eucalyptus forests the species needs to survive.

Scientists have long thought that the fur trade around the turn of the 20th century was to blame for the koala’s low diversity and related high susceptibility to pathogens. But a recent study is causing biologists to re-think that notion. Turns out, the furry marsupials have had very low genetic diversity since before koala coats became the craze.

Scientists gathered clippings of koala skin from museums around the world, extracted DNA, and sequenced it. “We didn’t see any difference between the koala today and 120 years ago,” says Alex Greenwood, a veterinary scientist at the Leibniz Institute for Zoo and Wildlife Research in Berlin and an author of the BMC Genetics paper.

Instead, Greenwood and his coauthors suggest, environmental fluctuations and aboriginal hunting most likely kept the arboreal animal’s numbers low even before Europeans arrived.

After the British settled Sydney in 1788, koalas were so rare that a decade passed before they reported seeing one. Koala populations then rose, until by mid-century they were fairly common. But before their population had a chance to diversify, habitat loss, fur hunting, and, possibly, an early chlamydia epidemic in the 1880s, began to take a toll. By the 1930s, they’d nearly disappeared in southern Australia and greatly diminished elsewhere.

The last open season for koala hunting was held in 1927, but today the epidemic of chlamydia, which takes advantage of immune systems weakened by koala retrovirus, is dire: “This coinvasion of chlamydia and koala retrovirus is considered a threat to the species, and could wipe them out in the next 50 years,” Greenwood says.

Greenwood and colleagues suspect that the threat of koala retrovirus has also been with koalas for a long time. In another study, published in the journal Molecular Biology and Evolution, they examined their museum specimens for koala retrovirus. They found that it too had been present in its current form for more than 100 years.

The disease seems to have first infected koalas in northern Australia, where all of the koalas now have it, and it has since spread south. Since most zoo koalas are from northern Australia, almost all have the virus. Greenwood and fellow scientists have been searching for disease-resistant koalas, in hopes of cultivating healthy populations, but they have not found any. A koala chlamydia vaccine is also in the works.

Such drastic measures may be the only way to save koalas, whose current predicament likely wouldn’t be so dire if they hadn’t lost so much genetic diversity centuries ago. While the effects of low genetic diversity may be initially hard to see, eventually species suffer the consequences. Says Greenwood, “It’s a matter of ticking time bomb, in that if you really don’t have genetic ability and can’t defend yourself of pathogens, it’s probably a matter of time till one shows up.”