A male golden-collared manakin, a small bird with a bright yellow neck, is a skilled dancer. He must be, if he wants to impress the ladies, who watch him carefully from the sidelines of a self-constructed dance floor in the forests of Panama. The speed and timing of his moves are of the utmost importance, suggests a new study. If the females like what they see, he’ll get the chance to mate and leave behind another dashing dancer.

Here’s how the courting takes place: First, the male manakin carefully clears a space on the forest floor, called a “court.” Then, he alights on a branch of a sapling that borders his newly designated area. With a puff of his yellow neck, or “beard,” he’s ready to show off his moves to potential mates–and then, he’s off. During the courtship dance, the male shoots between saplings, flying in an arc over his court, and flipping his wings to make a loud snapping noise at precise moments. Zooming back and forth takes lots of energy, but it’s worth it: Faster males get more chances to mate, according to the new study by researchers at the University of California, Los Angeles and published in The Proceedings of The Royal Society B.

How well, and how fast, the males perform certain dance moves may signal to the choosey females how they perform overall. Superb motor skills, sharp senses, exquisite coordination, and necessary power indicate a good catch. And she’s picky. The researchers found that even the smallest differences in timing can make or break a courtship. “Our results suggest that females visually discriminate differences in the male dance performance of tens to hundreds of milliseconds,” the authors wrote, who studied the birds in Panama, which also reside in Colombia and Costa Rica. 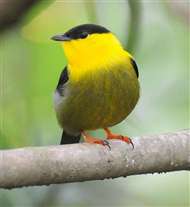 Researchers call the courtship dance “acrobatic” and it’s so taxing that the birds’ heartbeats per minute can almost double during the exercise to an astounding peak of about 1,300 beats per minute, a level previously only found in hummingbirds. It takes so much energy that the male loses about a fifth of his body mass over the six to seven weeks of courting, when he performs daily.

The female manakins don’t dance. They get to be the judges of the show and award the fastest dancing males with the most opportunities to mate. Males don’t stick around after mating, so the golden-collared manakin mothers raise their offspring alone. That means females don’t choose a partner based on whether or not they think he will be good at parenting. Instead, the female decides if he’s a good mate by judging him on physical traits. Males that look healthiest or the most robust or the most decorated broadcast good genes – genes that will be passed down to his offspring. Male manakins with bright neck plumage get more chances with the ladies, and now scientists know that their dance skills also make them more seductive.