Recently, ABC World News with Charles Gibson reported on studies that link climate change to worsening late-summer allergy seasons. Ragweed plants. scientists assert, are growing larger and producing more--and more potent--pollen because of global warming and increasing carbon dioxide levels in the atmosphere. Since a single ragweed stem generates hundreds of millions of pollen grains that can travel up to 400 miles on the September breeze, that's a grim prospect for the 50 million Americans who already suffer from ragweed allergies. And allergy specialists say they are seeing an epidemic of new patients. 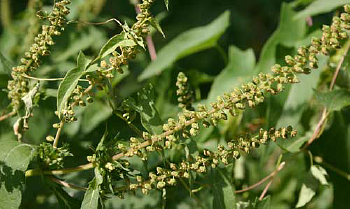 I've suffered from hay fever all my life, and I rubbed my itching eyes, stifled a sneeze and nodded in agreement as Charlie said that we're currently experiencing the most severe allergy season in history. The ABC camera focused initially on the real cause of our misery--plants in the peculiarly named genus Ambrosia, which are decidedly not the food or perfume of gods. But the scene quickly shifted  to a field of goldenrod and then to a closeup of a bee gathering this extravagant wildflower's fat, sticky pollen. Which, as any botanist will tell you, is too heavy to be blown on the wind and does not cause hay fever (so called because we start sneezing around the fall haying time). 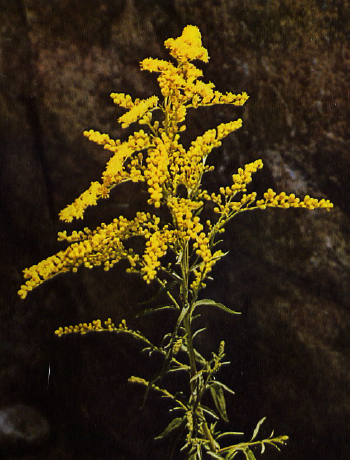 Alas, the showy goldenrods--there are some 100 native species in North America--are often blamed for our allergy distress because their peak blooming season coincides with that of ragweed, a coarse and unattractive plant with inconspicuous greenish flowers. When I was a youngster wandering the wilds of western Michigan with a Red Ryder BB gun for protection, I was warned by my folks never to cross a field of goldenrod or I'd get sick. The truth is you could probably stick your nose right into those flowers and never sneeze. However, you might come face to face with the tiny goldenrod crab spider, which can change its color from white to yellow over several days to blend in with its surroundings by secreting a liquid yellow pigment into the outer cell layer of its body. Chances are you'll also encounter a yellow-and-black soldier beetle that feasts on goldenrod's pollen. 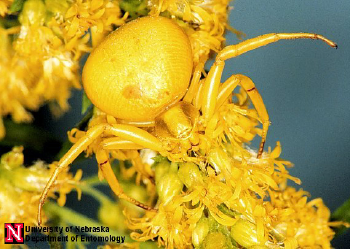 And the squadron of bees buzzing busily around the flowers that you're sniffing might be annoyed. As the naturalist Hal Borland wrote, "goldenrod providers a late-summer harvest that adds a special tang to autumn honey. If it weren't for the goldenrod and the asters, which also are rich in nectar, the bees would be out of business by the end of August." Hal also pointed out that goldenrod's botanical name, Solidago, "means to strengthen and refers to that plant's reputed herbal qualities," adding that early settlers made a yellow dye from goldenrod to brighten their winter clothes. 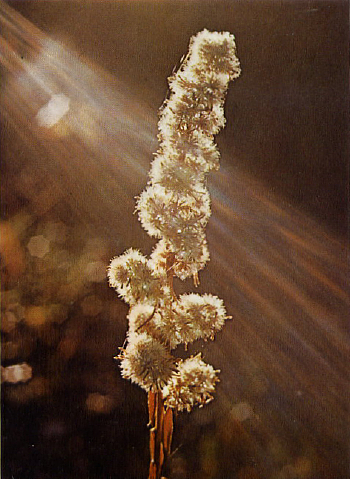 For wildflower enthusiasts, identification of the many goldenrods, some of which grow as tall as seven feet, is tricky to say the least. The Peterson field guide illustrates plumelike goldenrods, elm-branched goldenrods, zig-zag goldenrods, clublike goldenrods, wandlike goldenrods and flat-topped goldenrods. In the end it usually comes down to studying the features of the leaf in addition to the plant's shape. The only Solidago species that's easy to name is called silverrod. Its flowers are white. Meanwhile, goldenrods are attractive and interesting even after the flowers have faded when stems heavy with tufted seeds are backlighted by the late afternoon sun and swollen with the galls of fly and moth larvae.