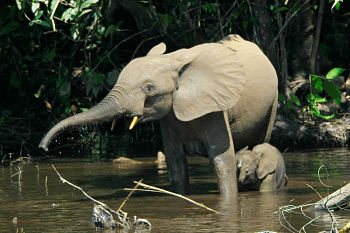 What is a species?

One of the most basic definitions is a group of animals that can breed and produce fertile offspring. Additional frills—like similarity of DNA, the way an animal looks, or how it interacts in its ecosystem—can add clarity, and researchers are constantly updating and tweaking species’ parameters as new scientific findings come to light.

Ten years ago, researchers found through genetic analysis that the African elephant, once thought to be a single species dispersed throughout the sub-Saharan continent, is actually two distinct species. Despite this discovery, however, the International Union for Conservation of Nature (IUCN), one of the leading conservation organizations in the world and publisher of the endangered species “Red List,” refuses to acknowledge the reality of two African elephant species.

“There is no issue, it has been proven that there are two species,” says Sergios-Orestis Kolokotronis, an evolutionary biologist at the Sackler Institute for Comparative Genomics at the American Museum of Natural History in New York. “The IUCN thinks there’s a disagreement, but there is no disagreement,” says Kolokotronis, who co-authored a paper published in the journal PLoS One in June (lead author Alfred Roca) that further proves the two species conflict isn’t a conflict at all. The IUCN, however, continues to insist that “the taxonomic status of West African elephants remains unsure” and that hastily jumping to conclusions may leave some elephants in “taxonomic limbo.”

The story of the two divergent elephant species began about three million years ago, when expansive forests covered a greater area than in present-day Africa and elephants filled these jungles. At some point, the forest-dwelling elephants began to venture into the neighboring savannah. Researchers speculate that evolution began to shape these pioneer populations. They grew larger so they could travel farther for resources in the arid savannah environment. But the newly evolved savannah elephants’ interaction with the forest elephants was far from finished.

As it turns out, lady elephants prefer large males. “If you’re a big male, you get the mates,” Kolokotronis explains. When the smaller forest elephant females came into contact with the larger savannah elephants, hybridization—or interbreeding—would inevitably occur. Over time, the hybrid elephants had their own offspring, and their offspring had offspring, and all the while the hybrid females preferred the larger savannah elephant males. In this way, the original hybrid’s genes—once split 50-50 between savannah and forest elephants—eventually stabilized due to the savannah male preference. Their descendents’ genetic fingerprint came to be dominated almost entirely by savannah elephant nuclear DNA, or the hereditary information inherited from parents and stored within the nucleus of a cell.

The original forest elephant females, however, left their genetic mark. Some of the savannah elephants still carry the DNA of their great-great-great-great-(…) grandmothers in the form of mitochondrial DNA. Mitochondria, sometimes referred to as the “cell’s power plants,” are remnants of an ancient symbiotic union of our complex cells with helpful bacteria. Because they were once separate organisms, mitochondria maintain their own distinct DNA, which is passed to on to offspring only through the mother. It is this mitochondrial DNA—a remnant of past mating between the two elephant species—that confounded researchers, making it appear that both elephant species shared DNA, and thus were a single species. But as Kolokotronis says, analyzing mitochondrial DNA “only tells half the story.”

With Kolokotronis’ study as well as other work published in venues such as Science and Nature Genetics, molecular evidence clearly points towards the existence of two sub-Saharan species of elephant: one occupying isolated forest patches of Western and Central Africa, another living throughout the continent’s open savannahs. “They’re almost as divergent as we are from chimps,” Kolokotronis says of the elephants’ genetics. 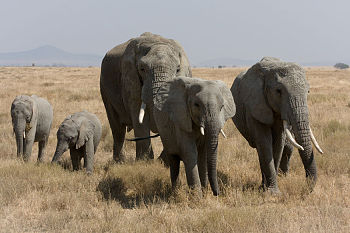 Once everyone is on the same page about the two elephants, conservation measures can be formulated to address the specific needs of each species. While estimates in Central Africa point to anywhere from 10,000 to 49,000 elephants, in West Africa those numbers are much lower, around 2,000 to 7,000 elephants. West Africa populations are largely composed of forest elephants, and in this region especially, the numbers are waning. Due to poaching, habitat loss, and the chaos of civil wars, forest elephants have already disappeared from Sierra Leone and Liberia. In Senegal, researchers estimated in 2007 there were only one to nine remaining individual forest elephants in the country. The Convention on International Trade in Endangered Species of Wild Fauna and Flora (CITES) lists elephants as Appendix I species—in other words, the most endangered and protected from commercial trade.

Establishing new conservation strategies is difficult and requires money and time, Kolokotronis says, and he realized organizations like the IUCN “have to adopt a higher degree of realism than sentimental scientists like us.” And for forest elephants, estimating population numbers is much more difficult than that of their savannah cousins. It requires more than just flying a plane overhead and counting herds since thick forest cover obscures populations from view. The first step in conserving the species would be establishing an accurate population count, and conservation schemes would follow from there.

Savannah elephants, on the other hand, are faring much better. Where conservation measures have been implemented in places like South Africa, Kolokotronis says, population numbers have exploded. This is sometimes to the detriment of farmers, though, as a hungry elephant can wreck an entire year’s crop of corn in less than two hours.

With such different ecological circumstances and conservation needs, Kolokotronis believes its time to move forward and establish specific protection regimes. As Kolokotronis and colleagues write, not acknowledging the difference between African elephants only hinders successful conservation of these two distinct species.