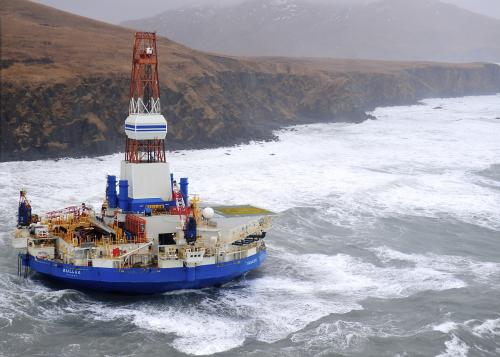 The Kulluk on New Year's Day after it ran aground on an uninhabited Alaskan island. (Coast Guard photo by Petty Officer 1st Class Sara Francis)

Shell’s numerous Arctic drilling blunders have spurred the government to launch an urgent review that could hinder—or even halt—the company’s continuing efforts to open up waters off of Alaska’s coast to oil exploration.

The latest slipup occurred during the final days of 2012, when the drilling rig Kulluk broke free from towropes and, after a days-long struggle, on New Year’s Eve ran aground on the uninhabited Sitkalidak Island—an Important Bird Area where more than 100,000 birds overwinter and 180,000 nest in the summer, Audubon says. The rig remained intact and doesn’t appear to have spilled any of its around 140,000 gallons of diesel fuel or 12,000 gallons of drilling fluids. It’s now been towed to a bay in Kodiak Island.

The out-of-control ride, combined with a series equipment failures and mismanagement, has prompted the Department of the Interior to open an expedited 60-day review of Arctic drilling. Conservation organizations say that this is a sign that Shell is in over its head in the Arctic, where an oil spill could harm fragile ecosystems.

“Shell has demonstrated that it’s a catastrophe waiting to happen,” David Yarnold, president of the Audubon Society, said in a press release. A coalition of 18 environmental groups, including Audubon, wrote on Wednesday to Secretary of the Interior Ken Salazar calling on him to suspend offshore oil and gas activity in the Arctic indefinitely.

"We don't know what went wrong, and that's why it's important that this high-level review occur,” Department of the Interior Secretary Salazar told journalists on Wednesday following a meeting of the Ocean Energy Safety Advisory Committee. “There is a troubling sense that I have that so many things went wrong."

The 2012 season has indeed been a troubled one for Shell. The company expected to start drilling for oil in the Beaufort and Chukchi seas north of Alaska over the summer, but equipment failures, mismanagement, legal delays, and bad weather forced it to postpone its plans.

In July, its other drilling rig, the Noble Discoverer, became unmoored in Dutch Harbor in the Aleutian Islands and threatened to run aground. In September, up in the Chukchi Sea, an advancing ice floe forced the rig to retreat to safer waters.

Meanwhile, Shell was struggling to get its oil spill response barge, the Arctic Challenger, certified—necessary before the company could receive the green light to drill deep enough to hit oil. In September its oil containment system was badly damaged in a test, forcing the company to scale back its operations and only drill “top holes” that will eventually extend into oil-bearing zones. The steel, dome-shaped device, which is meant to be lowered to cap an underwater leak in a disaster, shot to the surface of the water during the test and “breached like a whale,” according to emails obtained by the Seattle public radio station KUOW. Upon recovering it, operators found that the top half had been “crushed like a beer can.”

Later in the season, Shell struggled to transport its equipment out of the Arctic to warmer ports. The company confirmed that it was moving the Kulluk during the last days of the year to avoid paying taxes in Alaska in 2013 for the vessel.

Shell is the first to try to drill of the companies that purchased rights to oil off the Alaskan coast when President George W. Bush made them available in February 2008.

Multiple groups, including the Pew Environment Group, the United States Geological Survey, and the Government Accountability Office, have said that cold, dark, stormy, remote, and icy conditions could hamper a response should there be an oil spill.

Audubon has expressed concern about the effects of the drilling program on birds and other Arctic animals. The Chuckchi and Beaufort seas and their shorelines support a wide array of wildlife, including walruses, seals, bowhead whales, polar bears, and enormous numbers of birds such as spectacled eiders, yellow-billed loons, and Kitzlitz’s murrelets.

“Far more ably than its many critics, Shell has proven it is not prepared to undertake safe and responsible Arctic offshore operations,” Eric Myers, policy director of Audubon Alaska, wrote in an email. “The federal review must consider not only how Shell’s operations repeatedly failed but more fundamentally reassess whether to allow drilling offshore the Arctic.”

WHAT YOU CAN DO: Audubon has drafted a letter to President Obama and Interior Secretary Salazar urging them to suspend offshore Arctic drilling operations indefinitely until safety issues are addressed. Click here to send the letter.

In the face of climate change and offshore drilling, biologists are tracking walruses to better understand their behavior and protect the areas most important to them.

With the Clock Running out in January, the Bush administration, ignoring the concerns of its own scientists and possibly breaking federal law, looks to open a vital stretch of Arctic habitat to offshore oil and gas drilling. So much for saving endangered bears.