Contrary to the feminist wisdom tweeted on bumper stickers, well-behaved women do indeed make history. Consider Rosa Parks, universally perceived as the civil rights movement’s instigator. And Rachel Carson, whose book Silent Spring is commonly credited with igniting the environmental movement. In their respective movements Parks and Carson are as famous for being well-behaved, as for the history it is said they made.

That’s why you might not recognize the name Claudette Colvin, a Montgomery, Alabama teen-ager who in 1955 was the first black person to be hauled off to jail for sitting in a front seat on a bus. Civil rights activists strategically staged the same incident nine months later with “calm” Parks in the seat and the spotlight, because she seemed a more sympathetic representative of their cause than “mouthy” and spontaneous Colvin.

You may not have heard of Rosalie Barrow Edge either, the New York fierce society lady who sparked environmental activism more than 30 years before the 1962 publication of Carson’s Silent Spring.

During her decades of dominance Edge was considered the greatest woman conservationist, nature’s most effective protector since John Muir. Yet conservation leaders ardently promoted the “gentle” and younger Carson who was dying of cancer, displacing the “implacable” Edge who had repeatedly found fault with them and was still an activist at 85. She was known as “the most honest, unselfish, indomitable hellcat in the history of conservation.” But such deportment, it seems, destined Edge for oblivion.

Until now. I hope my new book, Rosalie Edge, Hawk of Mercy: The Activist Who Saved Nature From the Conservationists will garner for Edge the national recognition she richly deserves, almost 50 years after her death.

In 1929 Edge was fed up with professional conservationists corrupted by trophy hunters, timber companies, ranchers, water developers, pesticide manufacturers and government bureaucrats. These men—including a number of Audubon Society leaders—casually conspired over which wild lands and species would be saved based on their own personal interests and profit motives. Edge applied what she had learned as a suffragist to expose what they were up to.

Her revelations rocked careers and redefined the movement. They awoke her to her 33-year fight for biodiversity, and justified her insistence on personal responsibility for keeping the earth in balance, both hallmarks of today’s environmentalism.

Edge’s achievements were widespread, monumental, and lasting. Seventy-five years ago she founded Hawk Mountain Sanctuary in Pennsylvania, the world’s first preserve for birds of prey. 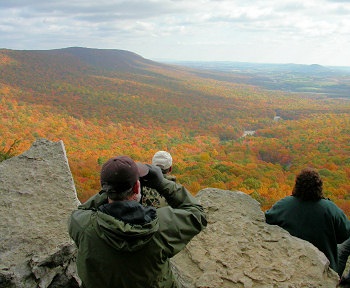 Hawk migration watchers at Hawk Mountain’s South Lookout. Author Scott Weidensaul says Edge is the one to thank “every time we watch a hawk circle unmolested in the autumn sky.” Photo from Hawk Mountain by Jim Wright and Kevin Watson. Used with permission of Kevin Watson.

During the Depression Edge’s unprecedented grassroots activism led to the establishment of Olympic and Kings Canyon National Parks, and toughened protections at Yosemite and Yellowstone. Edge was also the nation’s leading voice against indiscriminate use of pesticides. In 1960 her Hawk Mountain Sanctuary contributed significant raptor migration data to Carson, helping make the case against DDT.

Edge, more than any other person of her day shaped the first generation of environmental activists to which Carson belonged. Bird guide author Roger Tory Peterson, Sierra Club leader David Brower, and Nature Conservancy co-founder Richard Pough were among Edge’s earliest proteges. Founders and principals of The Wilderness Society and EDF learned from Edge’s example, and the Sierra Club as well as the National Audubon Society instituted organizational reforms as a result of her activism. In 1948 one major magazine called Edge “the most honest, unselfish, indomitable hellcat in the history of conservation.”

The Nature Conservancy’s Pough who had previously worked for the Audubon Society, told me he always regretted that hostility toward Edge kept her from taking her proper place in conservation’s pantheon when she died—only weeks after the totally eclipsing publication of Silent Spring. 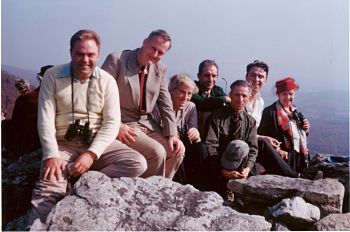