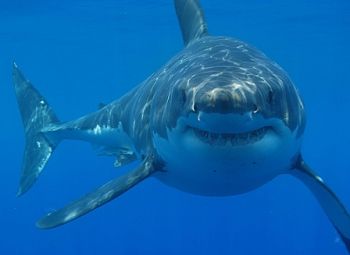 “Sparse on detail, high on testosterone.” That’s how marine biologist Kevin Weng of the University of Hawaii described to the Los Angeles Times how the media cover great white sharks. It’s no wonder the possibility of a showdown between these sharks and giant squids—a connection marine ecologist Michael Domeier from the Marine Conservation Science Institute made recently—elicits strong reactions.

Domeier and scientists from the Pfleger Institute of Environmental Research tagged anywhere from 58 to 75 sharks (the numbers vary by source) using pop-up satellite tags, tools that read temperature, depth, light intensity, latitude and longitude, and which eventually release from the shark on their own, heading to the water’s surface to send back their much-anticipated data.

Their results were intriguing.

Rather than showing that great whites—as the Monterey Bay Aquarium points out, the world’s top predatory fish—sit dormant in shallow coastal waters waiting to attack, the data revealed these fish migrate thousands of miles. Sharks tagged off the coast of southern California and Mexico, for example, make their way to the middle of the Pacific Ocean.

And what happens when they get where they’re going? This is where Domeier’s work stirs controversy. Domeier and a team followed 22 of his subjects to an area 1,500 miles east of Kauai, Hawaii—a place lacking any prey suitable for these sharks but waters that did contain sperm whales, known to feed on large squid. That led Domeier to conclude that the great whites were eating large squids, including the legendary giant squids, and the predators they attract.

I may be in the minority here, but I kind of hope the two titans don't actually meet. A clash between a great white and a giant squid—the former can get up to 22 feet long and weigh up to two tons; the latter can be 33 feet long and 440 pounds—would be a sad site to behold (and one I’d stay far, far away from). Either way, science still has a ways to go to prove this one conclusively.

A few facts about great whites, while I have your attention (from IUCN Red list and Monterey Bay Aquarium):
- They are listed as Vulnerable by the IUCN, threatened by development, pollution and over-fishing
- They are curious creatures, readily approaching boats and stealing from fishing lines (actions that sometimes lead to their death)
- They can have up to 300 very sharp teeth
- They can swim up to 25 miles per hour, and may live 20 years or longer